After a superb time in Germany, the return trip was rather dissapointing due to a few minor factors... Ooh, oh, ooh, yes, no, yes, no, ooh, yup, I feel a rant coming on:

Firstly, the taxi driver, who chauffeured four of us 10 miles from the hotel to the airport, was an absolute Muppet!
For a start, he didn't seem to care it was throwing down with some severely heavy rain and that he was driving in excess of 140kmh with the windscreen wipers on intermittent! He then added to the hazardous conditions by weaving in between cars on the motorway like a life-size game of Frogger. We told him to slow down and that we where in no rush several times, to which he replied, "Ah, it's OK, we will be there in two minutes." Grrr, two pieces more like if he carried on like that. Once we arrived, I kept my calm, didn't tip him one cent and walked off without saying a word.
Next time, no more Mr nice Dogga.

Then, I got a serious going over by the usual stolid German airport security, as I set the metal detector off.
They ran a widgymagig detector all over me and it made a screeching noise around my feet and then around my arse, which was slightly worrying, but a quick search of the back pockets, just revealed a packet of chewing gum. He then told me to follow him and he wandered off; now I would be a liar if I said the image of latex gloves snapping on didn't pop into my mind, and with all the onlooking security gaurds carrying MP5 machine guns by there side, I was a little sweaty by now to say the least, so he really didn't want to go down 'there'. Luckily he just wanted me to sit down and take off my shoes, so they could be scanned along with my socks! Grrr

Then, the flight was delayed by 45 minutes.

Then, the Lufthansa provisions where appauling and they haven't changed in years.
Below are dissection pictures of the Lufthansa cuisine.

So, see how the artistic packing says, 'Enjoy your meal!' and the words 'Enjoy' appear thrice on the sticker? The words, meal and enjoy are not something that spring to mind when you are presented with this late at night, after being delayed, thoroughly frisked and driven here by a madman. 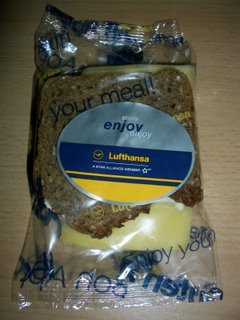 Next, you can see just how small this sandwich is, by the packet of chewing gum I've put next to it for scale purposes. 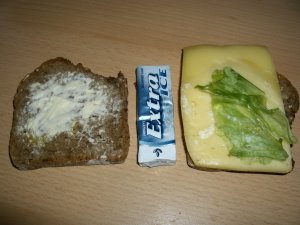 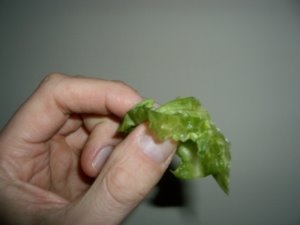 The lettuce is slightly, well, rubbish and limp and it appears there is shortage of the vegetable?

Today, I'm most angry about: It being Monday...

What an awful sandwich.

Seriously, I've never seen anything so rubbish in all my life.

hello
Your blog is great. Let me say "I feel your pain". The sandwich sounds rather frightening. Actually, my experience on a flight to Ukraine a few years ago was enlightening in terms of what some people call food.

An overseas flight costs more than a thousand dollars and they can't spare another 50 cents on some fresh ingredients. It's rather puzzling to say the least. Thanks for the nice blog. Take care.

Totally off topic, but I noticed your comment on my blog so thought I'd send you an invite so you can read all the stuff that is password protected. Then I realised I didn't have your email address. Doh!

Why is it that taxi drivers think it is ok to gamble with other peoples lives? If they were a doctor,pilot or banker they would never be allowed to gamble in such a way. Its time for the passenger to strike back!

Very true Mr Walking Man!
I'm with you all the way on this one.
Next time it happens, I'm gonna give em hell...

It's good to hear that I'm not alone with bad airplane food experiences.

You seem to have several Blogs Scott, which one is your main Blog?

Stu has my e-mail address.
If he's lost it, let me know and I'll send it!

Why didn't I put all this in one comment?
Who know's, but it's my Blog and I'll comment if I want to...