Amongst many 'photos I shouldn't have taken' and 'photos taken without permission of the subject', this one I thought was rather funny.
At Disney Land, my sister pointed out a woman strolling by, who somehow had failed to notice a four inch 'The Good Price' tag hanging from her obviously recently purchased head wear. 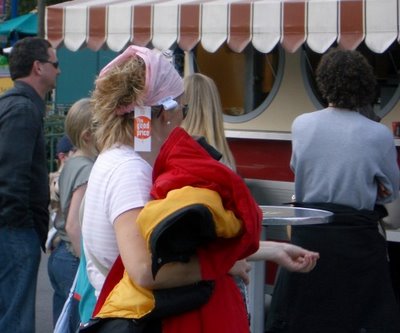 This caused me to snigger like a naughty child, leg it off at break neck speed and set myself up pretending to take a picture of something, while actually zooming into this woman.

Now, a polite and decent human being may of delicately pointed out the ladies fashion mishap, but as she was with her family, I thought it their job and best left alone!

The label may have been attached with one of those impossible-to-remove-by-hand-plastic-ties, and scissors were not at hand, but she could of tore off the cardboard label from the tie or something. I mean it's hardly the usual Gucci or FCUK that's being shown off here, now is it! ;-> Or, maybe she just may not of cared of course, so hats off to her*.

I also saw a responsible father writing down a mobile number on his 2 or 3-year-old son's arm, in one inch blue biro numbers, presumably in case he looses the child in Disney Land. Crude but effective I guess? It looked something subtle like this [MOBILE - 01234 567890]. Not that number of course, duh.

Today, I'm most angry about: Mislaying *cough* someone "borrowing" several needed cables and adapters at work, thus me not being able to find them for a gig tommorow night.
Grrr-O-Meter Rating: 2/10

Oh and she is wearing it inside out too. Hmm….maybe she is just making a fashion statement or setting a new trend or something ;)

Maybe she is a Minnie Pearl fan??

Dakota:
LOL...She is wearing it inside out too! I never noticed that. Icing on the cake eh. Well spotted.

Kayla:
;->
Welcome Kayla. Please feel free to drop in when you like and join in.

Greets to the webmaster of this wonderful site! Keep up the good work. Thanks.
»

Nice idea with this site its better than most of the rubbish I come across.
»