Last night, two friends and myself went and provided the sound for a band playing in Malvern called 'Dubmerge'. (They're a great reggae band and have ties with the likes of Zion Train. Last night they appeared as an 8 piece)

We were asked by a work related friend if we would provide and set-up the PA for this Saturday night gig (for a small fee, of course), so at the end of last week I got together and prepped all that was needed for the gig.
Midday yesterday, we hired a Foley rental van (with tail-lift too, woohoo), loaded the gear up and set off to find Malvern's Youth Centre.

I messed up the navigating in the middle of Malvern due to partaking in a rather in depth discussion about ladies kissing like horses, so I really should be forgiven for the mistake in such a circumstance.

When we arrived, I noticed a sign on the main entrance and thought to myself, wow, I go to the loveliest of places. [I presume this meant on the ground rather than at one another, but I didn't go into too much detail over what this evidently problematic habit was actually about] 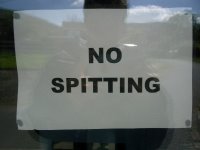 After an intense callous building session by lugging lots of heavy speakers, amplifiers, cables, processors, monitors and a mixing desk into position, the fun really started once set-up commenced.

As normal, a good head scratching session entailed, when we had a problem with monitor send 2, and after trial and error of all components, Andy [right] found it to be one side of an amplifier had gone down. Grrr. Luckily we brought along two spares. Phew... I had my own simultaneous problem with an RS485 PC control data line going down, but thanks to Lewis [left] for cooperating and putting up with my ranting and orders, to get it fixed ASAP. 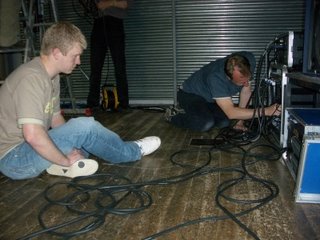 Once we had sound coming out of all the correct places, the band turned up and the stress inevitably built, as a deadline had to be met and the band had to be happy with everything in order to perform.

I tend to do this section, as I'm actually good at handling the stress of all this, as the sheer quantity of requests and mix preferences is a preposterous task to transfer to the mixing desk at speed, so monitor / front of house engineering at festivals, from main stages at Glastonbury to small Welsh festivals, makes me quite au fait with it all, luckily. The other two ferrit about on stage, acting as artist liasion or drink beer, depending if the latter is available. 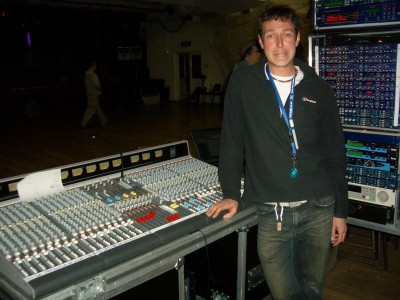 The eight piece had set-up their instruments and we had plugged most stuff in, so I started to line check, by asking the band to hit, strum, blow, shout or whatever it takes to make a sound in turn to make sure evryting is OK at the mixing desk end. Not too complex, one would presume, but with 24 lines [different instruments] coming off stage, artists being artists and many requests for extra lines to mic up a drum thingy or electronic gizmo, it all kicked off.

This is the mixing desk out with the audience and is the mix the audience hear, so the engineer is mixing for the punters and keeping it all sounding 'nice'. This is the most common sound engineer job, and requires a good ear and a touch of finesse. (There are at least 100 FOH engineers to 1 good one though) Last summer I was the FOH engineer on a one day festival in Manchester called 'D-percussion' and I had never used the particular mixing desk they had supplied, so I had to read the manual from cover to cover on the way up to Manchester, which made me a tad nervous to say the least, but I only made one mistake all day! The desk had exactly 3289 controls and buttons on it. That's more than 8 times that of a cockpit in a Boeing 747!

This is seperate mixing desk, normally situated just to the side of stage and is responsible for getting the sound on-stage correct, the mix in the artist's monitors OK and to prevent feedback. Without monitors, it would be a bit like trying to sing or play in tune with headphones on. You must have heard somebody doing this and it sounds awful, as they have no reference / can't hear themselves. [Monitors are the 'wedge' shaped speakers on the floor of the stage or sometimes they are in-ear monitors, like TV presenters wear] monitor engineers are a lot less common, but actually have the hardest job (that's probably why) as they temporarily become a member of the band and have many mixes (not just left and right) to deal with and it requires brute force, balls, a cool head and concentration more than finesse. Most engineers learn FOH before even considering monitors. I love doing monitors, although it never fails to get the old adrenaline pumping.

All big tours, most festivals and events use this standard two console set-up, but being a smaller gig and taking logistics into account, we did both monitor and FOH from one mixing desk!!! Perfectly possible, but not ideal and double the trouble.

Artists always get really arsy when they realise they have little time to get everything set up to how they like in a short period of time. The fact they will be playing to the several hundred paying punters shortly, so don't want to mess anything up and want to be as in-time and in-tune as possible never helps either. It's funny and quite normal as the artists turn into quite unreasonable people for this period (although afterwards, they are very grateful and nice as pie) becuause they are trusting this complete stranger with 'their sound' 50 foot away at the back of a hall, and you always get classic lines like:

"The guitar ain't loud enough in my monitor..." "No that's too loud..." "No gone again, a bit louder..." "Too much mate" etc etc etc, at this stage I just stop adjusting it and they still carry on with the same rantings, but it's just how hard the guitarist is playing. They soon stop asking once they realise this.

You also get my favourite line and last night it came from the drummer and it went like this:

"I've got no keyboards in my monitors" "I need keys in my mix, man" He then leans right over his monitor and angrily grimaces and shakes his head while straining to hear the keyboard. If he had of cared to look to his right, he would see the keyboard player isn't actually playing anything and is busily rolling a cigarette instead. Now what am I supposed to do about that? Duh

It was all inevitably sorted, although through the usual convoluted routes, and a good time was had by all. The music was great, the sound was superb, much beer was drank and the punters loved it. Result!

I got back at 2am and decided to walk the few hundred yards back to my front door from the drop off point in the middle of the main road, because I could! :->

Try this: Say 'beer can' without sounding like a Jamaican saying 'bacon'! Hehehe...

Today, I'm most angry about: Crushing an egg with my hand as I picked it out of it's box to put it into the fridge and it went everywhere in an eggs' weird stringy way. Grrr, what is it with me and eggs?

Oh dear... old habits die hard - I just scanned that rack to see if I could spot any KT kit.

You may now insert tongue behind bottom lip and push :)

See how it's all blue, bar the few Lexicon reverbs and a Marantz CD recorder at the bottom that I won in a competition in Germany a few years ago.

Glad to hear you're a fellow fan of the spheroidal food Boo.

I'm also glad you started that comment with 'i' ;->

Interesting looking guys, made me curious…… What’s their music like? ;)
Music maestro, please!

Their music is actually very good and they are a very tight band.
They did their own songs mainly, but popped in some Bob Marley, plus other Reggae covers in too.
I have no recording or MP3 though ;-(

No music? Hmm… bummer! I guess I'll just have to wait until they get famous :)