This evening, accompanying many other tasks and chores, I wrapped a present for my Niece's 13th birthday tomorrow. Yay...
[Let the irrational mood swings commence]

Now being male* and having no female around the house, I assumed I had enough wrapping paper in stock; even after my sister had offered me some, and I just passed the offer off saying, "yeah, I've got plenty in Sis."

I also did the male thing of leaving it until 10pm this evening to wrap it.

OK, so put all of this together and add a few beers... What do you get? 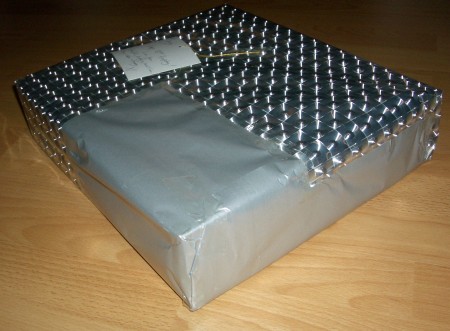 Now don't laugh! It was this or Merry Christmas paper, so I though I would justify my creation with it being environmentally conscious, as it uses up the two non specific wrapping paper bits I had left over, that other wise would of gone in the bin.

I'm rather proud of this, and my Sis #2 went halves with me on the present, and trusted me to wrap it, so I feel some sisterly love is headng my way, especially as both papers are silver, it's perfectly wrapped and I only messed up writing the gift tag twice; luckily getting it correct on the third and final gift tag.

[* Although not according to Kayla's Blog's Brain test]

love u too. sellotape can be very fun *wink*

What's going on here??
Looks like a girl wrapped that present ;)
Only teasing you Dogga..I actually appreciate your resourcefulness.
{WoW! that is one long word}

Enjoy the birthday bash :p
Eat cake for me too!

Boo:
Hehehe... I've never thought of using Sellotape like that, but I'm willing to be shown!

Kayla:
I'm sure there will be cake, so will do! I'm glad you’re on my kinda thinking with the wrapping!

Sis:
You misse off 'could try harder'.

Jan:
Hahaha! You win! Now that's funny and thanks for sharing. LOL

Stu:
AH, yes, I had some in the shed too. I also could of used some masking tape and attached the tag with white electricians tape. Darn! ;-)