The weekend's sailing trip went down a storm... Literally!

We sailed from Brixham to Dartmouth and back again the next day. A great time was had, much beer was drank, many laughs where shared and a real life experience was sampled.

Working the sails and ropes is quite a skill and remarkably complex, but the skipper did most things / told us what to do for him, so we got taught some basic stuff to get a taste for it.
It's quite easy to pick up really, but practice would definitely be needed to get the hang of it all, especially when knot tying, although I mastered the bowline, figure of eight and clove hitch!
Loxwood Lass, our lovely french yacht for the weekend 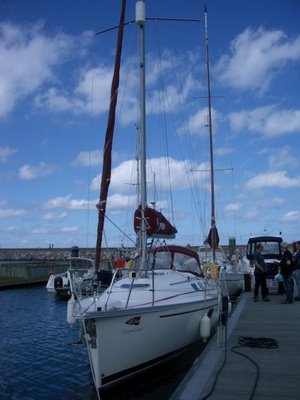 The kitchen and one of the two bedrooms aboard the yacht 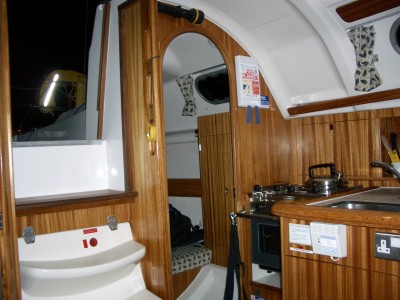 View of the mast from the cabin skylight 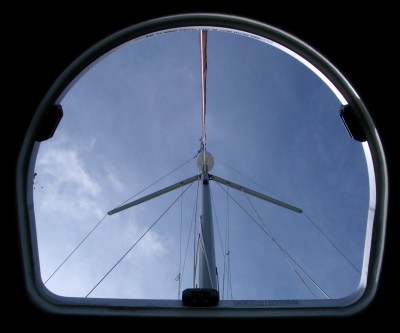 Our skipper Bob. 59 years old and he looks about 40 and has the energy and sense of humour of a 21 year old! What a star; a very entertaining person, but could he talk for England or what? 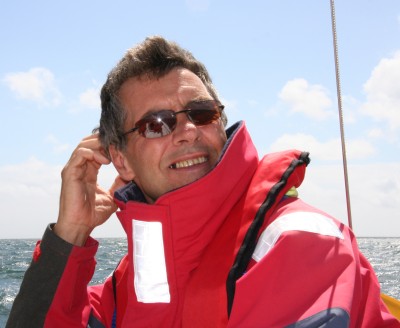 Andy taking us out of Dartmouth harbour and onward to sea 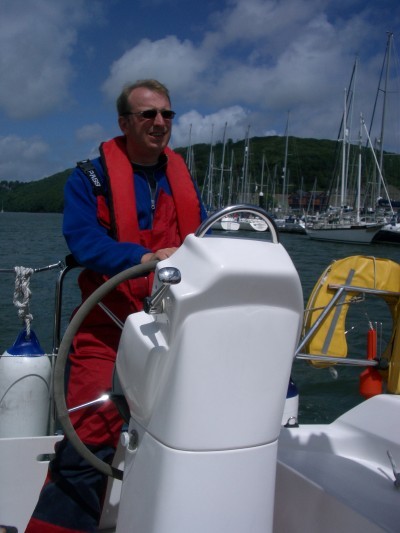 On the second night, the coast guard / Met Office released a force 8 storm warning!
They where right too and it battered our moored 'Loxwood Lass' boat overnight making sleeping a bit tricky, but with the sound of wind whipping through the ropes and mast, it made catching a taxi to Brixam, when thinking about sailing in it the next morning, a very sensible idea! The storm dropped to a force 6 by morning... Phew!

An ugly man on a boat! 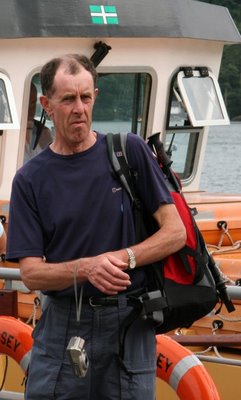 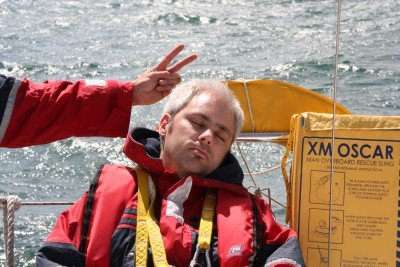 Dogga on the high seas 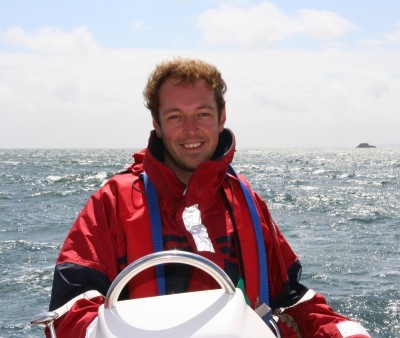 Tatering across the ocean, with the boat touching on 45 degrees at times, which is slightly alarming until you're told about the physics of sailing and realise that this is perfectly normal and safe... Honest guv! 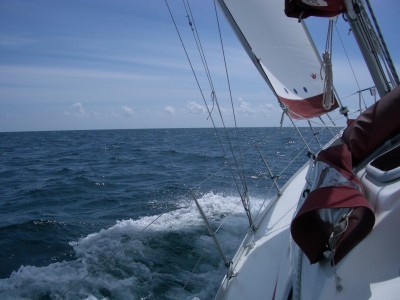 Dogga thinking it would be a good idea to moon the others from the front of the boat while out at sea. 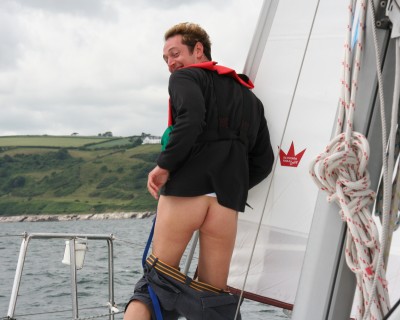 Not such a good idea, as pulling your shorts up that inadvertently fell all the way to the deck is very tricky! Luckily I had strapped myself on to the yacht! 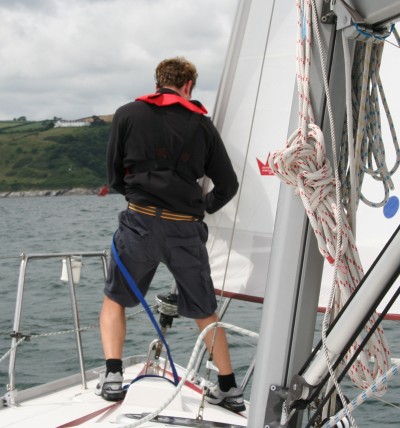 Standing on the pointy side of the boat... oops, erm, sorry, I mean bow of the yacht when at sea is incredibly exhilarating, particularly in the moments of weightlessness when dropping off the end of a wave into the next!

I spotted two dolphins or porpoises in front of the boat on the first day and it was great to see the their dorsal fins arching through the waves ahead. A first for me!

This is where Stu proclamined he can't wait to be old, so he doesn't have to walk anywhere again and someone can wheel him out in his chair with a blanket, position him somewhere with a nice view and leave him to watch the world go by! How odd... 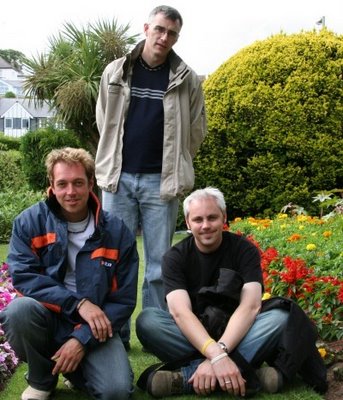 The Silver Fox, Big Rich and Andy taking on a force 6... at their leisure of course! 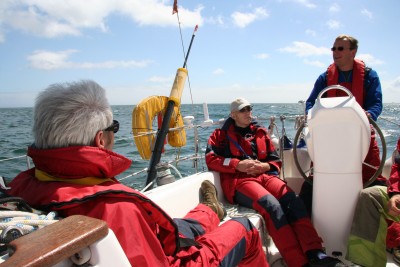 Now a certain member of the crew *cough* Big Rich needs reminding that this is a what a smoke alarm looks like and it makes a very loud bleeping noise when it goes off! 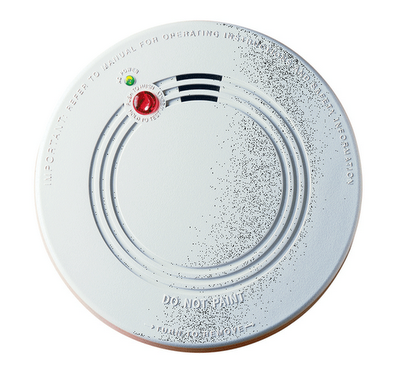 The boat's smoke alarm went off in the middle of the night, for no good reason, but Big Rich couldn't figure out what was going on, so he goes for the Navtex shipping information gadget instead thinking it's that making the noise, despite the smoke alarm being directly next to his right ear, dealing him a mere 110dB of siren! :]
In the middle of this, I think I heard him say "Cup of tea anyone?"

I highly recommended sailing if you have not tried it before as it's so different to powered boating, but beware, land-sway seriously hits you, especially if sleeping on the boat.
I've been swaying at my desk for the past two days, but it's stopped now. It must be my brains counter action to the swaying at sea. :)

Ahoy DoGGa!
A motley crew on a lovely sailboat ;)
Nice photo of you at the helm.
Glad you didn't get "three sheets to the wind" hehe
Looks like we got our HNT early!
Cheeky ;)
I'm going out of town for 9 days.
Glad I got to sea your photos before I left.
Take care
=0)

That looked great fun! I love messing about on boats on the sea, but not on the river for some strange reason. Did you stop for a minute just to look at the sea and find yourself compketely in awe of it? Gets me like that sometimes!

Ehmm… did you sang:
“I am sailing, I am sailing,
Home again cross the sea.
I am sailing, stormy waters,
To be near you, to be free”
on your way back?

Why is it since I have been reading your blog, everytime you go somewhere and then post pictures of the occasion, there is always a naked picture of you involved?

"Why is it since I have been reading your blog, everytime you go somewhere and then post pictures of the occasion, there is always a naked picture of you involved?"

LOL, I did get three sheets to the wind, but we where very much moored up for the night.
Glad you liked the pics and have a good 9 days inland! :]

Skipper Angela:
It was greeeaaat fun, but I've always been wary of water, especially the sea, but you sound a right sea dog! :]
The sea is very mesmerising, like flames I think. Forever changing and always unique...

Captain Dakota:
Glad you liked the post and yes there was singing going on, but more in the form of popular 80's music for some strange reason? :]
Thanks for sharing the lyrics though!

Swashbucklin' Sarah:
LOL! True, but 'cos that's the kind of guy that I am!
You don't have to read it! :] (Kidding)
I keep the pictures posted tame for the more prudish of readers, although maybe I should stop that now? ;->

Arrrrr, me hearties. Didn't end up in davy jones' locker then?

Don't u kids look CUTE in your sailing gear. Great post and ace pics, I love that Mr Fox is always either asleep/sitting down. There's just no stopping that man.

And..."he can't wait to be old, so he doesn't have to walk anywhere again and someone can wheel him out in his chair with a blanket, position him somewhere with a nice view and leave him to watch the world go by'. Dear lord.

Any self respecting pirate would catch a bus from Brixham to Dartmouth. OK maybe not. Sailing is great.

Lovely boat and there appears to be a full moon on your blog.

Lovely boat and there appears to be a full moon on your blog.

Landlubber Kees:
LOL, no, but thought we may in when that force 8 came in!
Glad you like the pics and The Fox is somethign special when it comes to lazyness. :]
It was Andy who blew the whole fire alarm thing up into a comedy sketch. That's where cup of tea came from, lol!

BilgeGirl Rose:
LOL, I actually went to look for a daytime moon I had missed in one of the photos then! :]

Nice idea with this site its better than most of the rubbish I come across.
»

Hi DoGGa
Great blog, glad you enjoyed having me!!!!
Check out my Website at www.ytcharter.co.uk
Hope you charter with us again soon