The past 5 days has comprised of me being in London attending and working at an exhibition called PLASA (Professional Light And Sound Association).
This event, along with other similar events around the world, happen every year, so early September always sees me in London. I've been incredibly busy lately, and this is partly why! 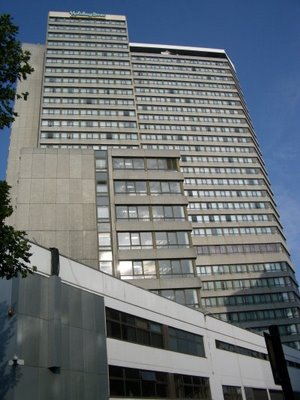 I was staying in The Holiday Inn hotel, Kensington. My room was on the 12 floor, so it had a pretty good view. 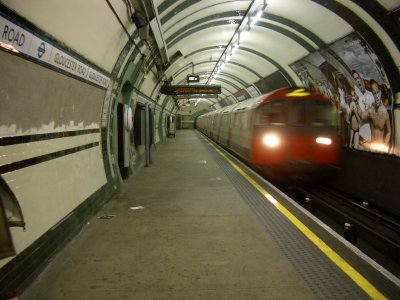 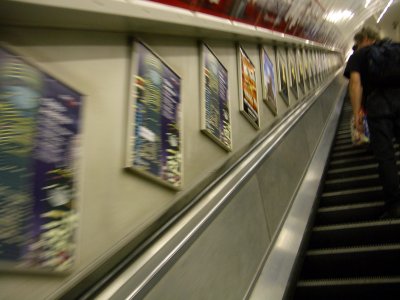 It never ceases to amaze me just how far underground the tube actually is in places!
After wandering around Trafalgar Square and checking out the originals of Vincent Van Gough's Chair and Sunflowers along with many other amazingly old paintings at the National Gallery, we decided to go into Soho and China Town for food: 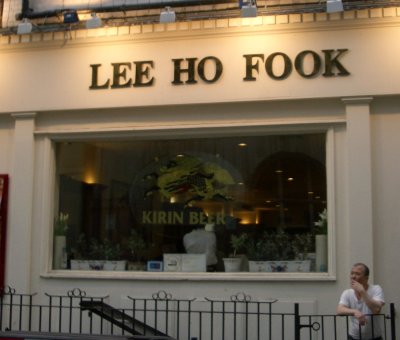 I spotted this rather entertainingly named restaurant, but we did not eat there 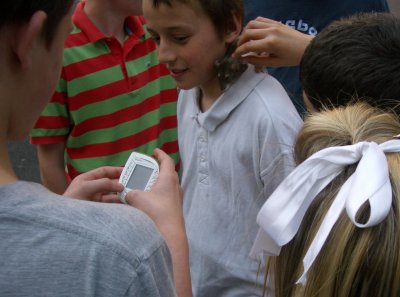 Along the way, I spied a small commotion going on, as a small group of kids were 'oohing' and 'ahhhing', so I went to investigate, only to discover this kid walking round with his pet rat sat on his shoulder! How cool, I love rats and used to have a pet one myself. 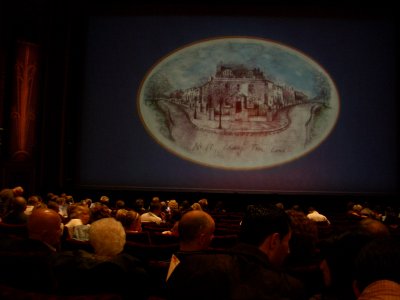 After stuffing ourselves full of Chinese cuisine, we went to see Mary Poppins in London's west end, near Leicester Square. It was an AMAZING show and it must have been for me to say that about a musical! The acting, effects and whole technical performance was stunning!!! 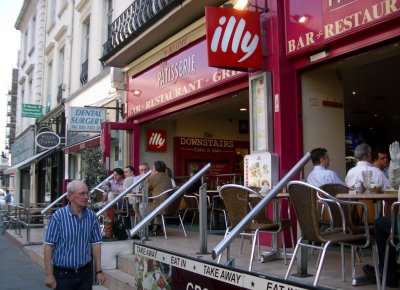 Every morning I headed off to my fave little cafe round the corner from the hotel. They have a stunning array of coffee, cakes and snacks to choose from and the people who run it are so efficient and friendly, it's great. Every morning I indulged in a breakfast of freshly squeeeeezed orange juice (litterally, they had boxes of oranges and a juicing machine) followed by scrambled egg, fresh Scottish smoked salmon and toasted English muffin - Delightful! 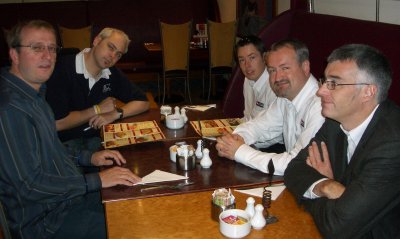 Andy, Stu, Bop, Guy and Rich all looking slightly jaded at breakfast from the previous nights excesses. I'm glad I was taking the picture here, errrrr... The PLASA exhibition from the top floor. The event is really quite large, covering both floors of Earls Court. Works exhibition stand which myself and other colleagues man and chat with end users, customers and distributors from all around the world. It can be boring and quite tedious at times, but equally as interesting and fun at other times though. For example, on the left is a representative from our Japanese distributor, Kunitaka Fukatsu and on the right our representative from our Chinese distributor, Glenn Wong. Glenn has a great sense of humour and was telling Kunitaka not only is Japan an expensive place to live compared to China, but also Tokyo is fucking expensive compared to Singapore, and so the banter continued! We work quite closely with a few companies, one of which, Funktion One, make very interesting and very high quality loudspeakers. This is their 'Dance Stack'!
Do you think I could get a pair into my lounge? The guy on the left here is Sir George Martin who is famous for producing the pretty much all the Beatles work. He's chatting to John Newsham from Funktion One who is also Underworld's engineer. I have no idea who the guy in the middle is, but I'm liking his hair style! :] We always have several spare passes each year, so each time our Sales manager comes up with daft names for people who don't actually exist. Every year, we try and have a new gadget or something on the stand to make things a bit more interesting. Our Sales Manager Guy excelled himself this year, as he hired in two masseurs from 'Urban Chill' to give out free Indian head massages on the stand to customers etc, including the staff of course! :) I drove down to London and back and parked the car at the hotel. I picked up a bill for £97!!! Check out these totally ridiculous London tariffs. Luckily it was all a works expense!

I'm off for on a break in North Wales for a few days now, so catcha all and catch up when I get back...
Today, I'm Most Angry About: This stooopid blogging software only sometimes allowing photos to be uploaded, depending on how it feels! Grrr, I hope the Beta is betta?
Grrr-O-Meter Rating: 3/10
Scrawled by Phil

I believe the chap in the middle is a one Chris Runcimen. He's a very well respected tour manager who I had the pleasure of touring with him some years ago. Your photos are great by the way. Never had time for a massage though.

Yes, the other day when I tried to load the face mask (ya know, the violent sex..) it took me 10 times before it would post the picture. Stupid blogger.

You are ALWAYS going away. Such crap. Enjoy.

Great report - I love the piccy of the tube train.

That's odd... wonder why it did my comment strangely then.

Looks like London Hotels all charge the same for parking. It was the same for us in Bayswater.
That breakfast is making me dribble (and my salt cod was bad as I undercooked it)

Great pictures despite blogger hell.
You are making em homesick for London when I am already in it.
Fun blog

Werewolves of London, Warren Zevon. One of my favourite all time songs ever ever.

I was going to say that Lee Ho Fook's features in Werewolves of London, but Kees beat me to it!

Chris:
Ah, that clears that up then, cheers!
I wonder why they were there and why they were chatting with John?
Also, how on earth did you know about my website? It's cool you've read it and commented, I'm just intrigued! :]

Sarah:
Hehehe, yeah but the picture was worth it. Isn't Blogger annoying at times eh!

Stu:
Ooh, I have no idea what's going on with the comments there?
LOL, Spit sir, spit? ;-)
Yeah, I was rather pleased with the tube shot, especially as I rode it into central London too.
Cheers Stu...

Hutters:
The fees are awful are they not sir!
Shame about the fish, but the breaky was superb, yeah!!! :)

City Slicker:
Hi and welcome...
London is great, but I can only hack it for short periods, I'm a country boy at heart! :]

Keesiedee:
Whoa, how cooooool, I had no idea! And what a great song and film too!!!
Spoooooooooooooookky or what eh?
Massages were groovy, Mr Fox was partaking oh yeah. I'll give him one on Monday to ease him in... A massage that is LOL!!! :]
We had a another name badge, 'Iona Bygge-Muff' and I gave it to my friend Ben so he could get in! He got some odd looks when it was scanned LOL!

This new Beta Blog is slightly annoying. I can only log on with my non-upgraded account. Anyway, it sounds like a fun time. Did you get to meet George Martin or just happen to be able to take his picture? He was "the Man". I guess that one restaurant was if you were in the mood for a good fook.

Oh my..
Being the salmon lover that I am,
I have to comment on your lovely breakfast first...YUM!

Funktion One has it goin' on, eh?
Love the name
I'm with you on the middle guy's hair style..

Ohhhh..an Indian head massage
Wonderful
I'll never forget a massage I received at a spa in Taos, New Mexico..
She massaged me all over then said she was going to remove my stress,
and I swear when she pinched a spot on my back and pulled upward,
the stress was relieved.
Absolutely unbelievable..
Marvelous..
I could go on and on with adjectives, but you get my point

Phil:
Yeah, I haven't gone over to the beta yet, as most report login errors. I'll wait a little me thinks.
No I didn't meet George Martin and don't really know what that was about and my friend Chris took the picture AKA excitedly asking to borrow my digicam and then run off with it to take the pic. I followed and got a brief low-down.
Hahaha, if ya wanna good fook in London, you now know where to go eh! :]

Kayla:
Smoked salmon rocks!
Funktion one are a very cool company, I get on with all the main staff and use their loudspeakers myself.
I love massges as much as you do by the sounds of it, but I can't find anywhere local to give them to me :[
I shall have to go further afield...

You'll give Mr Fox one will you? Lucky him. He's just shown me the pic you sent of him being given one, whinging about how it's not easy to relax with you lot crowded round him. Those name badges are genius indeed! Love it :D

Max:
Oh yeah, the first one of us to hit 60 and we have a sideburn growing competition! First to 1 inch wins :}

Ok... so I sent you an emails EONS (spelling??) ago and you still haven't given me your number!! :P

looks like fun
I love smoke salmon now I have a craving for it on some crackers yum!
anyway I need an Indian Head massage I just decided

Sarah:
I've recorded and used the voice mail you left for my text alert sound! :-)
I keep hearing a little Sarah voice coming out of my pocket now LOL!

Taht was like a guided tour of your day. thanks for taking us along.