A few weeks ago, I went to Wales with a group of family and friends, but never got round to blogging about it, so *drum roll* here it is at last: 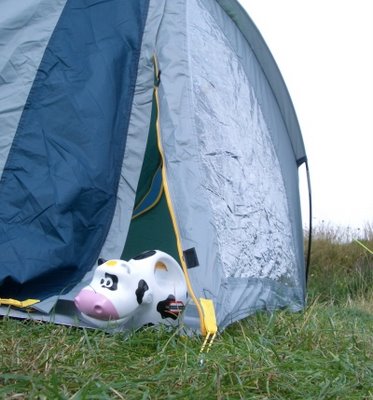 The cow torch on it's first outing! Here he is, emerging from the tent on the first morning 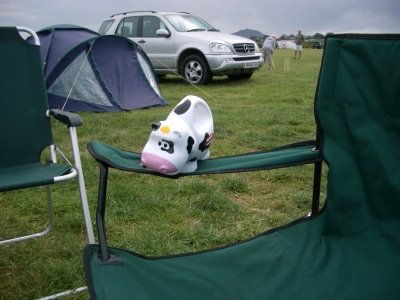 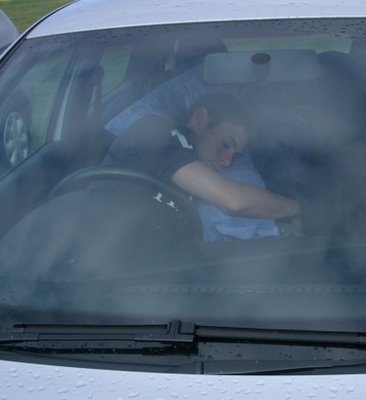 The excitement is too much for Mart who sneaks off for a nap. Dogga catches him red handed! 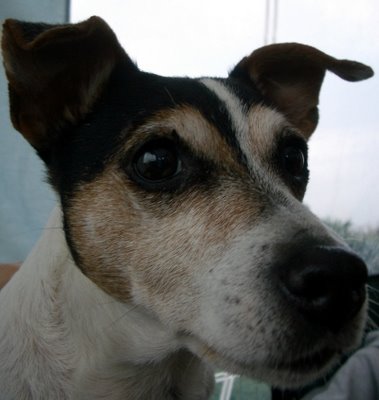 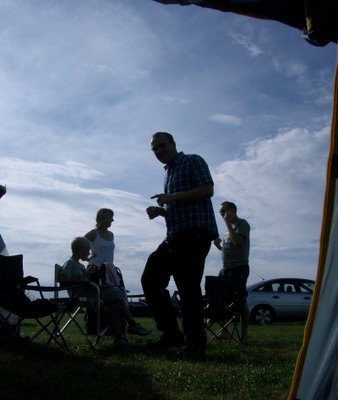 Andy and John busting-a-move or two in the morning, while I lie in tent in hangover recovery mode listening to Blue States... What a chill out album that is! 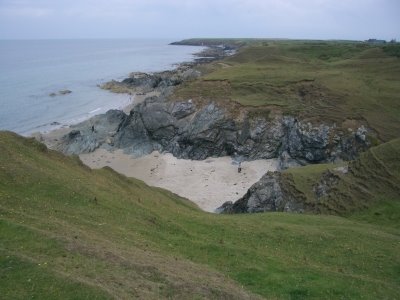 The Llyn Peninsula is an adorable place with many little alcove beaches. The sand is rather unique and very clean as it literally squeaks if you brush over the top of it with hand or foot. Locally the beaches are know as 'whistling sands' because of this phenomenon!!! 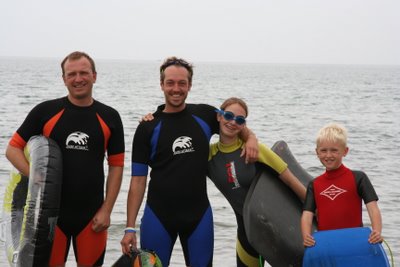 A bunch of us (Inc Andy, Dogga, Niece and Nephew here) went to the sea for body boarding.
I was a body boarding virgin until then, but I'm now a big fan! 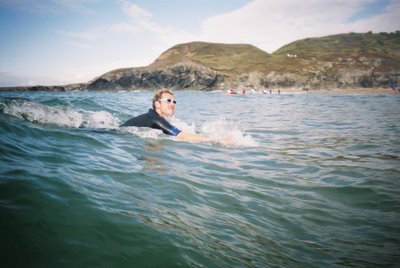 Dogga catching his first wave and in style too, as I found a pair of children's sunglasses buried on the beach, so just had to wear them. I look like I should be in Devo! :] 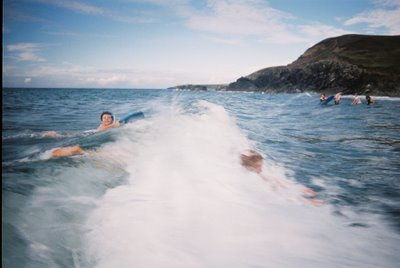 Mathew and Bee in the surf 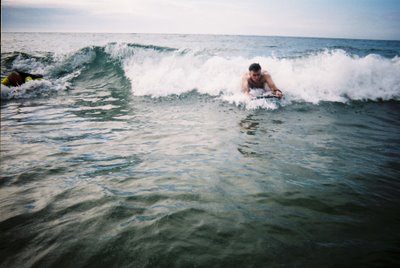 While out in the sea, a thunder storm formed and and started rumbling all around, to I guess I can now say I've watched a thunderstorm from at sea, reagrding a previous questions post! 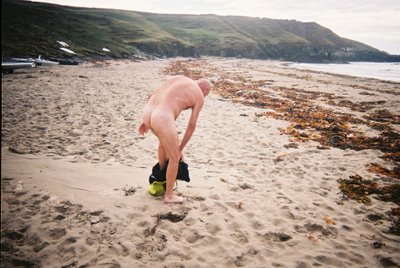 We noticed some old geezer streaking on the beach too *snigger* 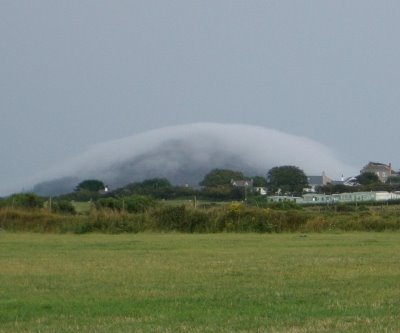 After coming back from my first body boarding outing, we noticed this odd cloud hugging a coastal mountain 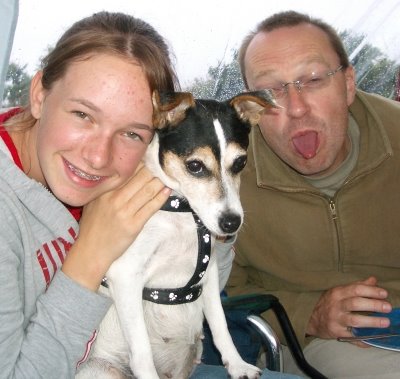 Most evenings consisted of putting a load of music on, eating hideously and drinking to match too. Early evening, Amy, Snooze and John. 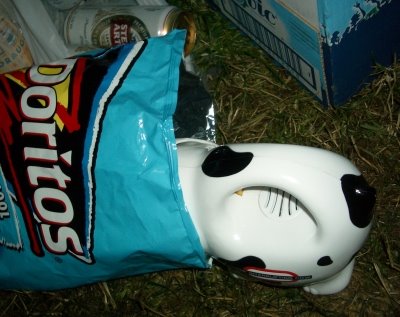 I caught the torch going for the Doritos... Naughty cow! 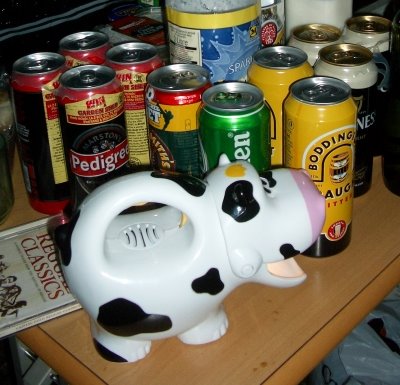 ... and then later at the makeshift bar. What can I do to discipline this beast? 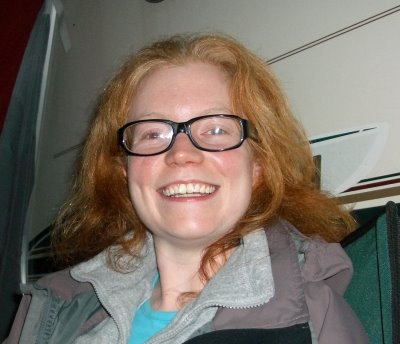 Too many beers = Sillyness
Bee + Joe's glasses = Chuckie from the Rugrats! LOOOOL 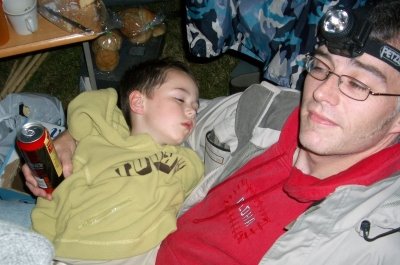 A1 parenting here! Notice how Big Rich has 'beverage' still in hand'?
I'm SO dead when either Rich or, even worse, his wife Prescilla sees I've posted this! :] 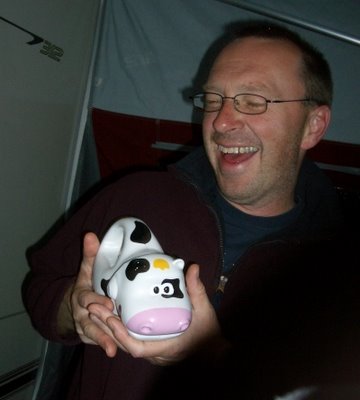 John takes the cow torch for a dance... as you do! 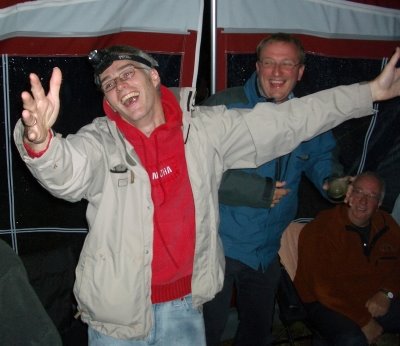 Big Rich back in disco mode and throwing-some-shapes for us... WTF? 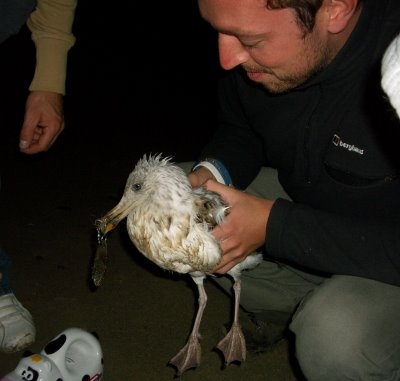 After much boozing, we thought it would be a good idea to walk down to the beach and back, but on arrival Roy noticed a seagull with something in it's beak.
I then realised it was in distress, so I legged it down the beach after it, cow torch in hand and managed to catch it. It turns out its beak has been skewered with a large fishing hook and the line was down it's throat and round it's tongue, presumably making it impossible or very painful to eat. 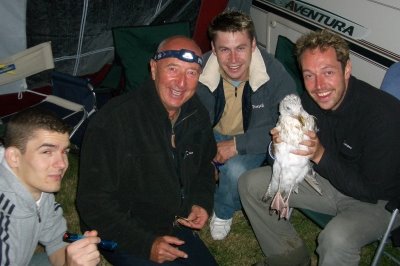 (Duncs, Roy, Mart, seagull and one proud Dogga. Andy taking the photo) I carried the large gull all the way back to the campsite, where we had appropriate knives and scissors to get the hook out and cut free it's tongue and remove all the line from down it's throat. We did it though and I let it go safely in a neighbouring field. YAY!!! I love rescuing animals. 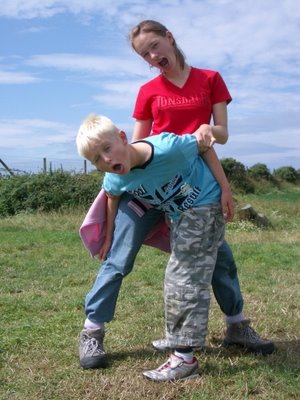 The following morning, I ask the kids for a nice photo and this was the best I could get out of them! I give up sometimes with their 'special' ways. :)

that looks like so much fun! what a beautiful place.love all your photos especially the kids posing! I love body boarding

Oh how I love sandy alcoves and playing in the sea with kids and a surf board. Great photos. Not sure you should have taken a picture of that man's bottom though.:-))

What a lovely peninsula..
And I never knew the sound the sand makes like that.
Florida sand kind of squeaks as you walk on it, however.

That is one boozing, nacho eating cow torch! haha
A real "party animal"
I suppose removing its lightbulb would teach it a lesson ;-)

The old geezer has a pretty nice ass for an old man..
Not that I'm looking, you know..

Oh, and how could I forget saving the gull?
Way to go DoGGa!

Lindzy:
It was great fun and it is a special place. Another body boarding fan, cool!

Kat:
A lovely trip it was indeed. I really had an ace time. Hehehe, the bottom belongs to friend Roy; he had put his wetsuit on backwards... Teehee :]

Kayla:
Morning Kayla...
Huh, it's probably the same type of sand in Florida then, I love it.
He's one rockin' cow, but yeah, I could threaten him with bulb removal, that should keep him in-line! :]
I tell ya what, you would have mad Roy's day by saying he has a nice ass, LOL, I shall have to tell him.
*blush* I like wearing my wetsuit, but it is cheap crap.
The seagull rescue was a horrible in places, but I hadn't the heart to leave it to die, not at least without trying.

Oh my…..Chuckie was there too…. LOL! Oh and talking about the Rugrats….that naked guy looks a bit like Tommy ;-)

I have rescued many seagulls. They show no gratitude whatsoever and insist on pecking you, or getting their parents on you.
Lleyn is great
Boarding is great. Did you catch a wave? Last time I tried it, I heard loads of whistling and shouting. I didnt have my specs on and didnt realise they were trying to stop me surfing onto the rocks;-)

Aw great post, pics are great. Good job on the seagull although as Lord Hutton says they are, by and large, hateful little devils.

Your pictures are fabulous!!! :)

Ok, so you guys call flashlights "torches"? I just want to make sure. Or if you are just calling it that.

Dakota:
Yay for seagull rescues! :]
Hehehe, yeah Roy does do a good Tommy, from behind. *snigger*

Lord Hutton:
Haha, yes, I received my fair share of pecking too. :[
Yeah, I caught a few waves, but the second day the waves were as tall as me, so much more fun, but I didn't surf into any rocks luckily!!! :)

Max:
Horrah for the cow torch. Thanks Max!

Amy:
Teehee, well you posed like that! I did ask for a nice one! :]

Colleen:
Welcome and thank you Colleen! :]

Sarah:
Bee's boyfriend Joe brought this likeness to light after a few beers one night.
Ah, yes, torches = flashlight! LOL
When I was trying to buy one off the net, I was getting nowhere with my searches for 'cow torch', as it's an US product! :[

Looks like you had fun. I wonder if the ikd dude knows his tush is on youe blog. I'm just a random blog surfer looking for cool new blogs. :)

Rose:
Hello and welcome to you!
Yeah, Roy was shown the blog entry and he was rather pleased about the comments he recieved about is tush! :]
Please feel free to join in on this blog... You are more than welcome!

by torch you mean flashlight, correct? love the body boarding pics. not lovin the old man ass pic too much though. haha

Celeste:
Hello and welcome Celeste!
Ah, yes, torches = flashlight! LOL
When I was trying to buy one off the net, I was getting nowhere with my searches for 'cow torch', as it's a US product! :[

Big Rich here , WTF - you are so busted , you wait till I see you Monday morning, yeh you know your nut box - you wait till I have added to it. Then I'm gonna pin you down & try some amateur body piercing. Where did you learn to spell - been at the Dime bars have you - crunchy armadillo's !
Matthew has two T's Matthew &
Priscilla does not have an E.
Man the guy in the red hoody can thro wicked shapes - yeh you would.

InvertedF:
Bring it on big boy - I believe you know someone called 'Ewan Hoozarmy'??? LOL
I always spell Preiscillciai wrong, tell her to get a proper Dudley name like Sharon or tracey! :]
You can throw some wicked shapes and yeah you might... :] *snigger*