Hi all - The Doggboy is back!
I've had a short break due to being "unwell". Sometimes I suffer from mild depression and self doubt, and when I do, I very much worry that I'll write the wrong thing, so I don't blog.
Thank you to all those who have asked where I have been and those who support me when I'm down. Anyway, I'm back now, so here goes...

Last week I went with a few friends, including most of the members of scØre, to see 'Hot Chip' play in Birmingham and they were great. I've only recently been introduced to this band and have to admit I'm still getting used to their unique style, but at least half of the tracks on the latest album are great!

One of their best tracks is 'Over and Over' and can be heard, complete with video, on their MySpace site here. [Scroll down to see video, but first PRESS PAUSE on the MP3 that annoyingly auto-plays at the top]

Hot Chip played in a bit of a dive of venue called the Irish Centre and it was really hot, smoky and getting a drink from the bar was as good as impossible; the queue was relentless. I even spied a gorgeous barmaid and that wasn't enough to make me queue, so it must have been bad!!! It was nice to see XTA gear being used though. :] 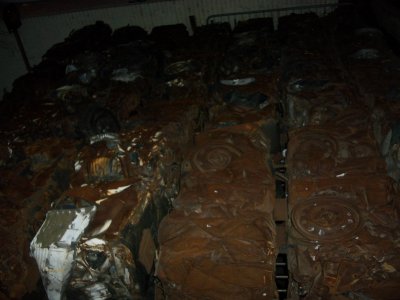 We parked the car in a rather odd car park, where the entrance is made from old crushed cars, as the picture terribly shows due to poor light. I presume this is to put you off not buying a ticket, as this is what may happen to your car if you do not.

As a bonus, I found £3 in the ticket machine, so used that to buy the ticket and then the machine spat the money back out again, after issuing me a ticket! Result, free parking and free money.

Well, this morning I'm off for a long weekend break on a narrow boat.
See ya'll next week!


Today, I'm Most Angry About: Loosing a pair of favourite socks, then finding them, then loosing them again in the space of 10 minutes??????? Grrr - Where are you hoof covers?
Grrr-O-Meter Rating: 0.7/10

Today's Top-Tip: Don't waste money on paper shredders. To avoid having your identity stolen, simply place a few dog turds in the bin bags along with your old bank statements.

On the "don't waste money on shredders" tip...

I wonder how the average dog owner would react if, just as they stoop to clear up after their pet, they were approached by a non-dog owning but mildly paranoid individual asking "do you have a use for that?"

You know Dogga, it can help to talk and there's plenty of us here to listen. I know it's not always easy to talk when your down but remember you're not alone!

You are certainly NOT alone. Good luck with the Black Dog, old chap.

Enjoy your trip on the narrow boat and please post about it.

That video is, well, different;-)

I like the anti-theft idea with the dog crap

Y'all are funny! I adore the GRRR O Meter! The women on the phone was so funny I damn near pee'd my pants!

Hya Doggboy,
I missed seeing you around, but I'm glad you follow your heart and not blog just for us!
*Cue Billy Joel song*
"We love you just the way you are"

I learn so much from you..
I looked up different info on narrowboats.
Very cool stuff. Sounds peaceful, these folks that live on them for months, even years.
Does it belong to a friend, or do you rent one?

Hey up DoGGa,
I just now watched the Hot Chip video. I like the song, and the video is funny.
I don't usually hear this kind of music, but the couple of bands you've shared on here have been great!

Seams to be the time of year for it...

Oh my…. And I thought Electro was dead ;) It takes a bit of getting used to, but I liked the video :)

I hope you are having a marvellous time and it’s great to see you again. Stay warm, {{DoGGa}} (on the sunny side etc)! :)

cool hope ya had fun on the narrow boat! I checked out that band..they sound pretty good..great idea about the dog turds ..love it and will def. keep it in mind! glad your feeling batter and good to have u back

Kouros:
Hehehe, now that would be funny to do and secretly film! :]

Superstar:
Hi and welcome!!! Wise words Superstar. LOL, yes, how very true... Must be a British thing yes!
Glad your liking my rants though :o)

kayla:
Hey, thanks Kayla! :)
Narrowboats are very cool and relaxing, but if you do live on one, it is obligatory to curse at people who rent them for passing too fast! It's true :0)
We rented one for the weekend! x
Glad your liking the music Kayla... It's good to listen to something different now and again.

Sarah:
Hope you feel better soon. Drop me an e-mail if you need to rant or anything :[]

Dakota:
It took me a while to get used to them... and I'm still going :o)
I had a fab time thank you Dakota and trying to keep warm still yeah :] X

Lindzy:
Cheers Lindzy! I had much fun and yes, I'm getting back with it now :) x

Hi , I want to introduce you to http://freearticle.name