What The Doctor Prescribed...

Over the last two months, I've been suffering from tension headaches EVERYDAY, so yesterday I went to see my doctor.
I'm not normally one for going to the doctors, as I prefer to look after myself, but after consuming many packets of Paracetamol and Ibuprofen, I decided to go see the quack...

After she gave me the once over (...and no, not like that, but I do have a thing for my doctor ;-) she informed me that it wasn't a brain tuba [parp], but she then spent the next five minutes telling me how I should consider getting a girlfriend and start to think about having children, now I'm nearly thirty, and that would stop the tension headaches, as I'd be far too distracted and busy to worry about headaches. LOL
I informed her that it may induce more headaches, so she prescribed me some tricyclic tablets instead and instructed me to come back and see her in a few weeks.

What a diagnosis eh? Or was she maybe asking? ...Scary

With this in mind, check out this picture taken last week!
Somehow I can't see this curing my headaches, especailly when it cries... 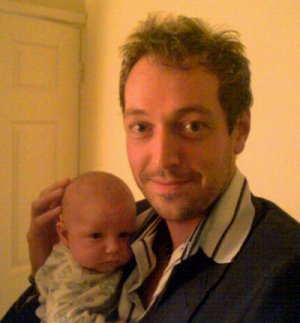 DoGGa with his friend's four-week-old son 'Archie'... His wife handed me their offspring while she popped to the loo, but I soon passed him off onto his dad after this photo was taken, as he burped and it sounded like he was going to chunder over my new shirt.

Today, I'm Most Angry About: Deciding to go and buy the cool winter coat I spotted in Stourport's Factory Shop, but them no longer having my size in... Grrr, it was a bargain £30 too!
Grrr-O-Meter Rating: 2/10

Today's Top Tip: Don't waste money on expensive iPods. Simply think of your favourite tune and hum it. If you want to 'switch tracks', simply think of another song you like and hum that instead!
Scrawled by Phil

awwwwwwww (the baby that iz) lol

Mom's heart would melt if she saw this picture! Think how happy she would be if you had a little poppet all of your very own!

I gave you a niece and a nephew, so play fair - your turn now!!!

What a darling photo of you two!
You look just as sweet as little Archie.
Your doctor is trying to get you hitched, eh? As well meaning as she may be, I don't think you need to feel the added pressure of worrying about your singlehood!
You do need an outlet for that tension, however.
You already are an exercise buff, so maybe you just need a good friend's shoulder for an emotional outlet.

Grrrr bumped up a notch on your meter...I hate when I've spotted the perfect item, and they have every size but mine!

If your doctor's hot, ask her out for a date when you go back.

Strange advice, coming from a doctor. Looking for/finding a girlfriend, just because your doctor prescribes it, will only cause (IMHO) more stress & tension ;).
Usually they advice you to look for the root of your tension….. another great advice which can cause more tension, especially when you can’t find the cause. Okay, but enough of this….you are tense enough as it is. I hope the drugs will do their job….feel better soon {{DoGGa}} :)

Well, I am off now….humming my favourite tune (forgot to plug-in my iPod this morning)
Thanks for the tip :)

Chunder... hmmm, interesting term. I may have to use that at work if someone vomits.


And as far as the tension headaches, that is what I see my chiropractor once a month for. I don't get the headaches anymore. Plus the obese people that I have to pick up and pull up in bed put my back out.

And that baby is adorable... maybe your doctor was hinting for you to ask her out? She could be your sugar mama.

It does sound like your Doctor might have what the Doctor ordered. How are her peppers?
Your comment about how it may induce more headaches cracked me up. You do look like a natural with the baby though

Big Sis:
Pffft, you gotta be kidding! Yourself and sis numbah 2 has given her 4 to deal with, that'll do. I don't want to wear her out! :}

Kayla:
Ah, thanks, I think? LOL
I'm just a stressed eric as it were I think?
Mmm, grr indeed, they had large or Xlarge, and even the large could fit two of me in it! :]

Ned:
Hahaha, she's a bit old and a family lass etc, but maybe worth a shot LOL! :)

Dakota:
Cheers Dakota. Drugs are spacing me out a little bit, but I've gotta give em time.
Happy humming LOL

Sarah:
Chunder, puke, vomit, sick, blowing chunks, hurling... All good euphemisms really!:]
You get the old tension headaches too then eh!
Mmm, I dunno about the baby being quite adorable :[]
Sugar Mama LOOL!!!

Phil:
Her peppers LOOOOOL, that's a new euphemism for me now!
A natural eh? Ooh, just a bit in practice from nieces and nephews etc I think... I hope :[]

AWWWWWWWWWWWWWWWWWWW OMG what a sweetie....oh and the baby is cute too!!! JJ...anyhow...i had tension headaches too a few months ago..it was due to tooo much stress....are you stressed dogga???..go spend the day at the spa or something...lolololololol.

You ar geting old! I have had the shocking realisation, I'm one year younger than when my dad got married to my mom (surprisingly enougth) No pressure there

You'll just have to take the plunge old chap. It isnt that bad having wife and kids, you know. You just end up getting divorced and catching the expense of the children (*pays daughter's garage bill mutter mutter)

She was coming on to you Dogga...your in there mate!! LOL!!

Love the Ipod tip....that had me chuckling.

can't decide which of u is cuter :X

Max:
Hehe, yeah, I must be getting old, but ooh no pressure on that front here :]

Guggen:
LOL, yeah and mine actually! ;)

Hutters:
NNNOOOOOOO!!! I've seen that happen all too many times. I don't think that path is for me :0)

Angela:
Hahaha, I can see that yeah. That would be funny. Maybe I should have asked if she was! :]

What the hell kind of doctor prescribes children as a cureall for headaches???!

Yes, I think you should get a baby of your own - Not sure that it will relieve the headaches though. LOL.

Has Archie met Veronica & Betty yet?

Seriously, if that's the advice your doc gave you, you must bring into question her 'good' intentions! LOL!

DoGGa, (and Celeste) Maybe she misunderstood you. She may have thought you asked how do I GET a migrane?

Yes, peppers have a new meaning for me too now.

Phil:
Ah yes, maybe she misunderstood the question! I must take note of her peppers next time! :]

awww what a sweet pic... so adorable, the both of you that is...