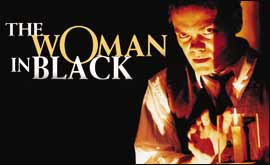 On the weekend I went to see 'The Woman In Black'.
A creepy, but very entertaining show and I was blown away by how the performance was delivered...

Cutting a long story short and although a little confusing at first, one of the characters shows another character that he does not need many props or effects, just good stage presence to portray his true ghost story well and proceeds to show him how.
They then basically perform the whole play with no more than 3 chairs and a wicker basket... Very well done and completely absorbing, it also gave me an eerie shiver or two at time and made most women in the theatre scream several times with well timed door slams etc :[]


On the other side of the spectrum, I came across a bookmarked link I meant to post ages ago... So from horror to comedy; I thought this was just great, until it got to the end :0)
C o i n a g e
Today, I'm Most Angry About: My office plant not flowering, when three others in the building have done so just nicely, and I give mine loads of TLC too!!! Grrr :'[
Grrr-O-Meter Rating: 1/10

Today's Top Tip: Save on charity donations by spending £1 on clothes at a charity shop, then selling them for 50p to another charity shop. This way you can give twice as much, at half the cost... I think?
Scrawled by Phil

Sorry... the coin flipping is _definitely_ better than girls.

How to muck up a good video!

The video of annoyance.

yourz will bloom when the others are all done!

Wow, that guy is creepy looking!
And the music on that link (Woman in Black) is eerie.
I would have been one of the screaming females! haha

Cool Coinage video, but yeh...
Axe kind of ruined it for me too.
Don't ever wear that stuff, okay?
haha

You must talk to your plant!
Seriously..this is why the little old ladies have such beautiful flowering plants.
But they must be kind and loving words!
;-)

I've seen The Women in Black twice and think it is one of the best plays I've ever seen.

Are you sure the math is correct on today's top tip?

Lindzy:
Ah, yes! A very optimistic outlook that... Hehe, and then they'll be sorry :[]

Kayla:
The whole play was eerie, and yes, I bet you'd of screamed :[]
Nope, no Axe wearing here... It's actually a cheap rip-off of a brand called Lynx anyhow, but I use that!
Talk to my plant! Err, OK... I wonder what would happen if I talked sexy to it then? :0)

That sounds like a very interesting play! Oh, and while we are on the subject of entertainment (ahem)…. When are we going to see your performance (the Nick Cave video thingy)?

OMG, Ghost stories are my FAVORITE! I would love to see that. That video killed me! I didnt watch it with sound cause it's not yet 6AM here, but man, that was GOOD :0)

Mellow:
Yeah, it was a spooky one and sure to make you jump. :[]
The vid doesn't need sound... Just as funny silent :0) Glad you liked it.

I don’t see ;) because I can’t find it! Kidding…I haven’t been searching! Anyway, I guess there is a time and place for an x-rated video….so I’ll wait patiently for it to turn up :)