A Wet and Windy Wicked Weekend in Wales...

On the weekend, a friend and I decided to go to north Wales for a couple days of walking, eating and boozing, but on arrival the weather was decidedly blowy and was equally impressive to the winds experienced up at Tan Hill.
Given the conditions, more eating and beer drinking took place, than walking, but hey, do you here me complaining? (Cue tumble weed and distant church bell sound effect)

The wind rather unnervingly rocked our 'hard standing tent' quite vigorously at times and never really ceased throughout both nights, causing me to me wake intermittently in a startled 50p 20p state! (If you don't understand that expression, I'm not explaining unless you e-mail :0)

Due to the weather making high altitude walking both physically hard and dangerous, we stuck to lower level walks and there's a great one around a couple of lakes and an old forest, taken from a walking book, which I have done may times and it suited this weekend just nicely... 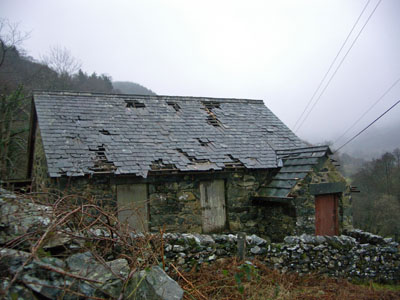 Around the other side of the first lake, we poked around this lovely old house... 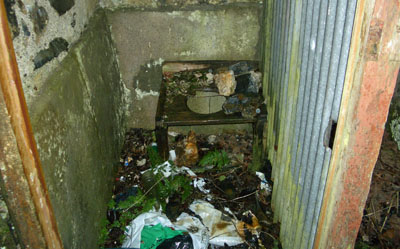 Upon closer inspection, I spotted the old outside loo!
Niiice... It's hard to believe that inside toilets are actually quite a modern commodity; relatively speaking.

The next part of the walk goes through a rather magical forest and last time I was here, a solitary wild white horse was roaming around inside!
The local Equus caballus residents were all gathered by a holiday cottage this time, eating the lawn :-) 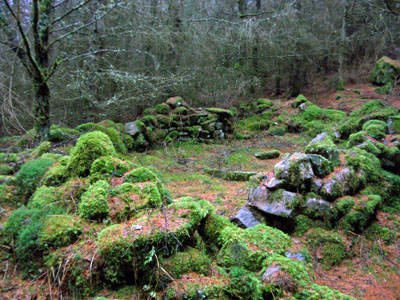 In the middle of the woods, I spotted this... Anyone wanna help me rebuild this old house?

I can envisage the Estate Agent advert:
A secluded airy, one bedroom, cosy and attractive traditional dwelling with stunning views of encompassing woodland. Extensive gardens and a great view of the night sky from inside! In need of some modernisation and associated amenities!

The trees in this wood are very ancient and mossy; you can just imagine elves or dwarves inhabiting such a place. 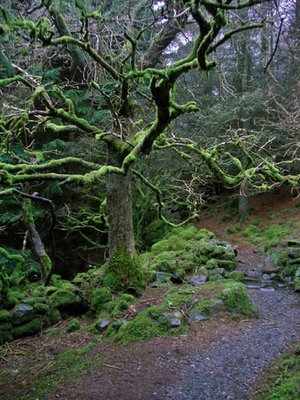 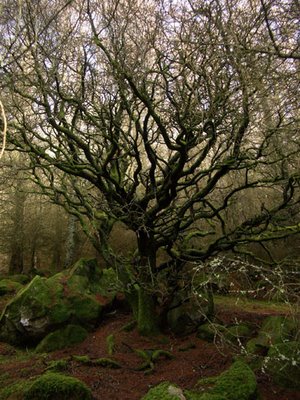 On the evening, me and me buddy ate at one of my fave restaurants, although the waitress's have gone rather downhill aesthetically :0) 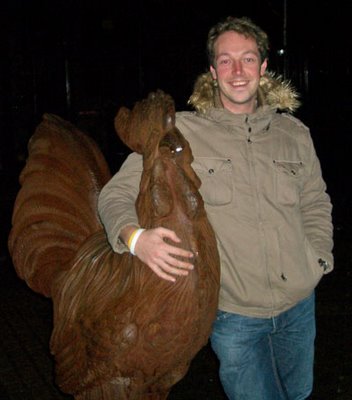 After much nice food and many ales, a walk round Betws-y-Coed was called for and I stumbled across this, well, big, hard, kinda, massive, sorta... you know what it is!!!
(And no, it's not a rooster)

The wind showed no mercy, on the second day, and an unsuccessful trip to find to the highest pub in Wales was embarked upon, but along the way we stopped to look at a reservoir and dam, as the wind was something special, rocking the car and proving very hard to walk in... 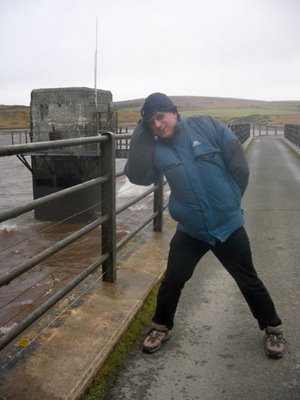 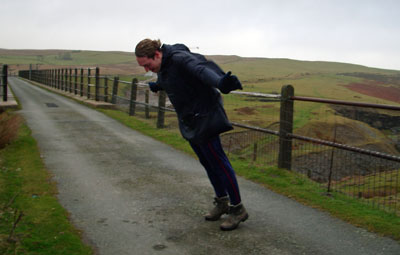 The wind easily held all of DoGGa's weight!!!

On return to the campsite, police had blocked the road right opposite the site because canoeists had got stuck. On the scene were police, ambulance, the press AND a rescue helicopter, so we went for a quick nose. See the story here. 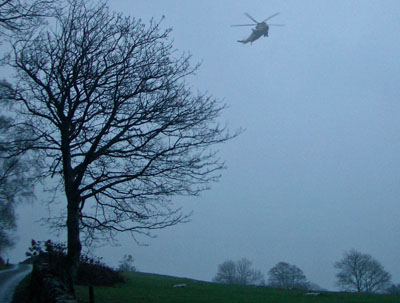 The rescue Helicopter flying low over the campsite and being blown about quite severely.

Today, I'm Most Angry About: Having ZERO energy for circuit training, but a gorgeous girl attended today, so it kept me distracted! :0)
Grrr-O-Meter Rating: 2/10

Today's Top Tip: Turn the tables and make shopkeepers feel like criminals by carefully checking their change and holding any bank notes they give you up to the light before accepting them :]
Scrawled by Phil

That one bedroom place you spotted is what my family refer to as a 'project' when we see them. It's the kind of place you expect to see Adam Hart-Davis leaping about excitedly on top of...

Beautiful pics as usual. I love N Wales. We had a caravan(!) holiday there a few years back, M and The Boy were going "what have we let ourselves in for" at the start, but by the time we climbed snowdon and gone trekking etc (oh and a day trip to Dublin) it became "the best holiday I ever had"

I like that old house, but I do hope my roof is not going to look like that by the end of the day.
The other house has a lot of potential too. You can build it just the way you like it :) Btw, did you ever consider a career as an estate agent? You can write those “honest” adverts really well!

There's a cockerel (ner!) like that outside a cottage up on Edgehill.

Rob:
Hahaha, yeah, 'project'... An all too familiar term that some of my friends use to soften the blow of hard labour! :]

Dakota:
Thanks deary.
Yeah, roof would be the first replacement on that pad.
Hahaha, an estate agent, no, but yes, it is spookily like a something real :[]

Jan:
As in the batlle of edgehill?
They are big cocks :[]

Liked today's top tip. Your pictures always make me want to grab my backpack and hop on a plane. Those are some cool pics you got there.

those pics make the place look like a scene out of LOTR :)

Toccata:
Yeah, I want to start looking up and down shop assistants too, to make them feel like thieves :]

Boo:
Ah yes, very LOTR indeed. There was a stream running through the forest too.
Aw, cool, thanks, needed a summery pic to make a warm chnage :X

Yes, the battle of Edgehill took place on the plain below the edge of the hill - Edgehill village is at the top, right on the edge!

*anyone mentioning 'old' gets a slap* ;)

Oh, I get it now... LOL, just doesn't quite roll off the tongue the same, but one to save for another day. :0)

Hey I din't mention OLD either... Whoops, I just did *runs and hides*

That's a friggin' big chicken you got yourself over there!!

are you sure it's not a cock? it looks massive.

Oh oh oh! I wanna go to that foresty area and play Robin Hood! Yay! Man, your photos are always so beautiful!!!

Yoda:
It's actually kinda scary being THAT big :0)

Mellow:
We could play Robin Hood or Lord of the Rings in there all day if you so desired :]

Dogga, your posts are always so entertaining and visually appealing. I love how the photos compliment the stories. Keep up the good work!

Oh, and yes. That forrest looks like a scene out of The Lord of the Rings.

Celeste:
Yeah, I want to start looking up and down clothes store assistants, while following them round at a reasonable distance and pretend to look at clothing, but always keeping them insight! :0)

Thank you Celeste, I'm glad you enjoy my posts :]

Yay, so fun! I wish I could. Hey, could you please send me the photo of the tree? I would LOVE to use it as my desktop wallpaper. mellowlee@gmail.com :O)