Last weekend saw this year's visit to Centre Parcs.
The place was fully booked except for one luxury villa, so what the heck, we booked it anyway and my word was it nice. 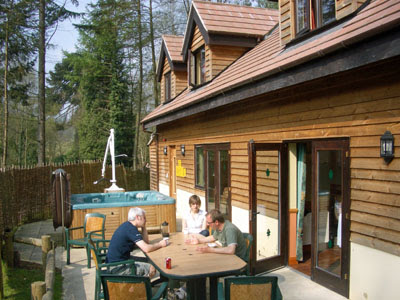 The villa turned out to basically be a detached 4-bedroom house with private parking, en-suite for all rooms with an LCD TV in each too and even an 8-birth hot tub outside... 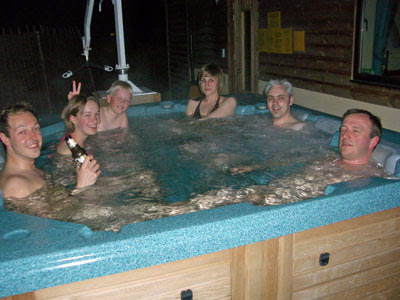 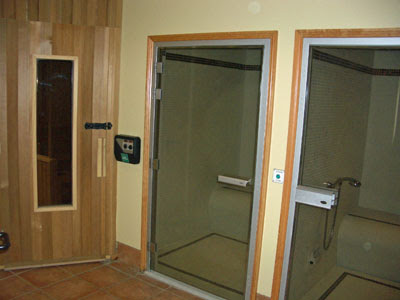 It also had a steam room and sauna inside.
Now that's posh, but we are very much not :) 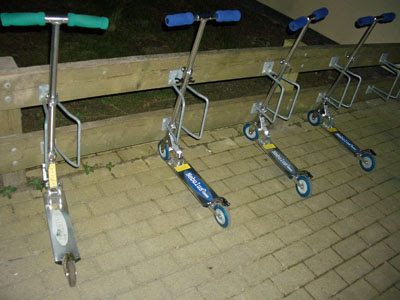 Check out our 'steel horses' parked outside
Just like the Hells Angels... Almost

The first day incorporated a new made-up game of:
"Phil has to squeeze a completely 'random' word into a conversation with Centre Parcs staff regardless of what it takes game"

The 'Random' word theme of choice from the others: Vehicles

1. Lifeboat (Andy's suggestion)
Completed! Much to the embarressment of my sister, I asked the car park attendant if there were any lifeboats up ahead before parking, to which he replied "err, no" after a short pause

2. J.C.B. (Sis's suggestion)
Completed! Asked the barmaid for one* in the middle of a drinks order, which rather confused her even though I explained to her it was a bit like a digger :0)
[* A JCB that is, tut]

3. Muck-Spreader (Kees's suggestion)
Completed! Asked the barman for this cocktail and he surprisingly enquired what it consisted of. I had to make it up on the spot - Vodka, Malibu, cream and a crushed up pack of M&Ms. He actually made it for me, tried it, liked it and said he was going to add it to the specials menu LOL! 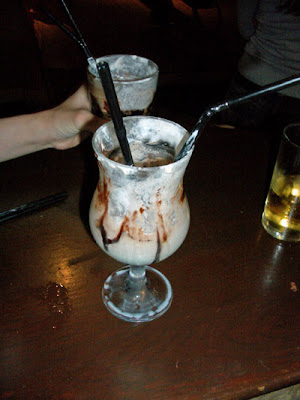 Here is the quaffed 'Muck-Spreader' 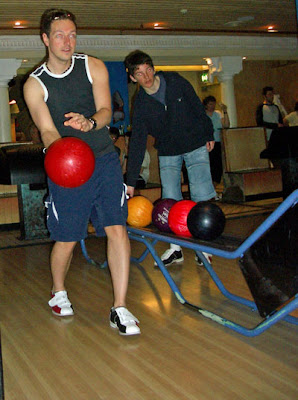 After drinks we all went 10-pin bowling 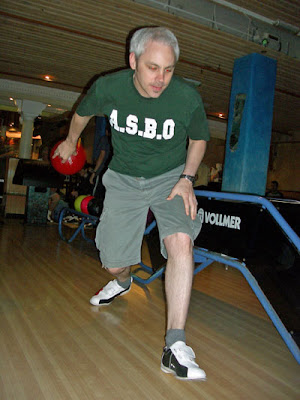 Here's the Silver Fox in action sporting his A.S.B.O. t-shirt 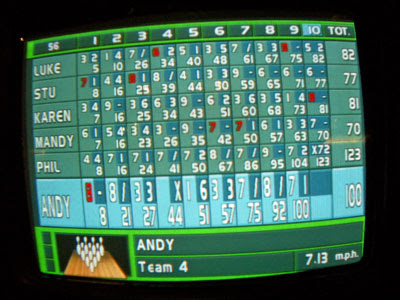 I whipped em all I did 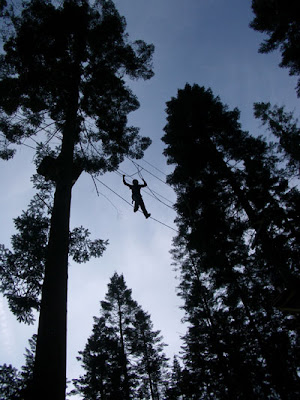 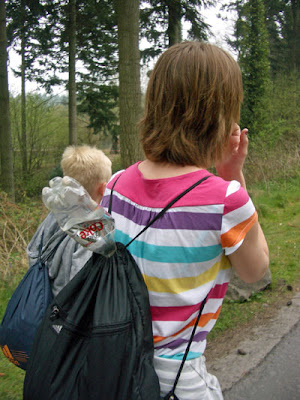 What do you do with your empty bottle of Coke? Stick it in your unsuspecting nieces rucksack of course, mmmwwwhahaha! 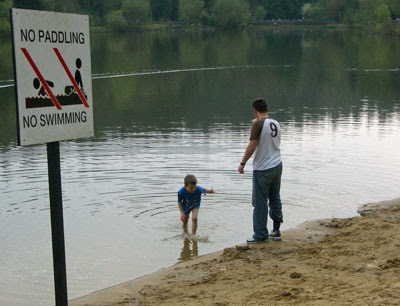 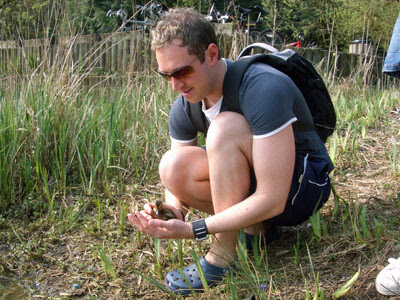 DoGGa caught himself a DuCKling, aww 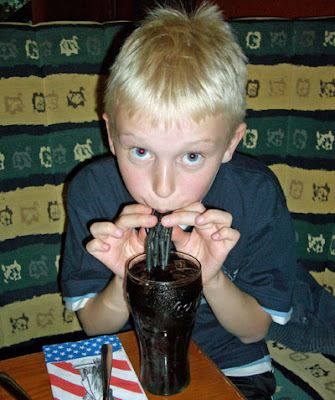 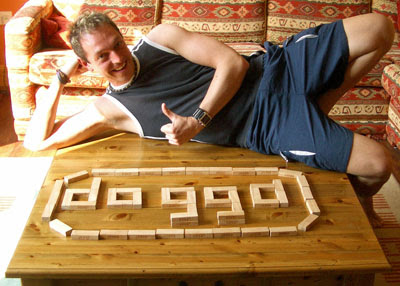 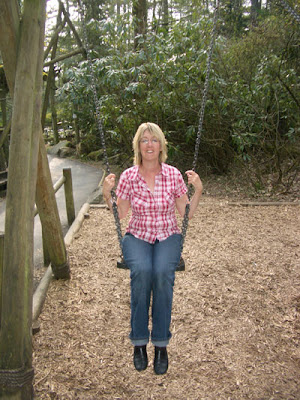 Being a big kid must run in the family... Yeah big sis 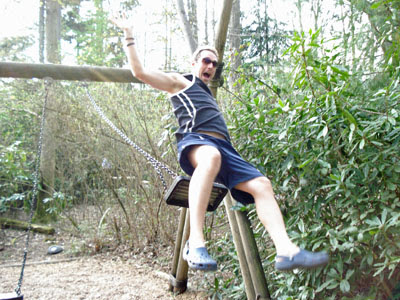 
I did start to feel quite ill after having a razz on yet another swing :] 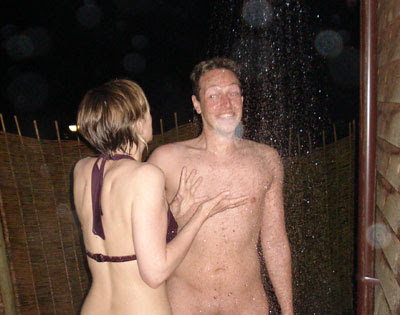 After Kees and myself drew at standing in the cold plunge pool for the longest, I challenged her at standing under the outside cold shower back at the villa. I won :[]

Today, I'm Most Angry About:

Taking a trip to the supermarket to get a sandwich for work and leaving without one! Quite how I managed that I don't know. Grrr
Grrr-O-Meter Rating: 1/10

Today's Top Tip: Star Trek Captains. When your ship is in imminent danger of being destroyed, save a great deal of hassle by thinking of the last thing you could possibly try, which might just work, and do that first.
Scrawled by Phil

You got all nekkid again didn't you!!?

As always, a great blog entry! Love ya!

Love the HNT - I suspect that it was more than half though!

M swears by centre parcs. Looked pretty smart. Do you get thrashed with nettles after the hot tub? ;-)

brilliant blog! i met someone off hollyoaks hehe!

amy won't stop going on about meeting somone from hollyoaks, so next time you come round ours expect to hear about that and nothing else!

You're naked with a girl. Naughty.

I love the line up of scooters. Easy riders or what!

Davy:
It may of been a little more than half yes :]
Centre Parcs is great yeah!

Hutters:
Centre Parcs is superb fun and no, no nettle trashing luckily :]

Amy:
Cheers! I know you met someone from Hollyoaks - You'll have ot show me the picture!
I met Norman from Hollyoaks once, but he's no longer in it :[

I need a holiday!

I really should get out more! Even Center Parcs is starting to look appealing now! ;)

Looks like another fun filled weekend. Good for you!

its more liek full frontal friday but hey i scrolled all the way down for a butt shot and got a peek at *ahem*. was it a tad nippy :-X

you're making it look more like central PERKS now :)

Dakota:
I had a spare bed in my room too Dakota, oh well :`[
Twas good fun, you'd like it - They have a well being spa there too with saunas and massges and all sorts!

It was great to see Kees out and about from behind her Phd thesis.

This blog had everything. Cute little ducks, cute little kids and almost but not quite buck naked men in showers.

Toccata:
I think Kees was glad of the break yeah!
Glad you liked the blog! Hehehe, something for everyone eh :]

First off, if I could whistle on here, I would! I like the look of surprise in the HNT photo.
Also must comment on the superior concentration you have while bowling!
haha..Congrats on the win
Love the A.S.B.O. shirt. Went to the link, never heard of that before. Guess that's another one for our dictionary!
Love all of your photos DoGGa. I really appreciate seeing and learning about all of these cool places
;-)

looks like a great time! awww what a cute little duckling..love all the photos dogga its good to be back at your blog

Kayla:
Glad you liked the post Kayla!
Hehe, it was more a look of determination to beat Kees :]
Ah yes, our dictionary, ASBO LOL!
Cheers kayla...

Lindzy:
The ducklings were just great and very cute. The mum wasn't bothered about them being handled either! :]
Good to see you around again Lindzy, especially now there's 1.5 of you!!! :}