This weekend was spent locally around home, which actually made a nice change, although it wasn't without its moments...

Friday Night:
After being woke up again at the usual 3:50am by my neighbour slamming his front door shut and his noisy car exhaust, I've reached the end of my tether putting up with this for nearly 6 months, so I paid my neighbour a visit and had 'polite words' with him! 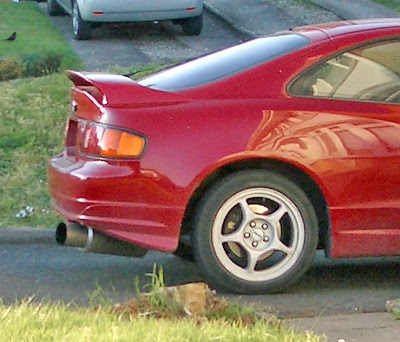 He was very pleasant and said that he's a postman; so that's why he gets up early and he didn't realise he was disturbing me??? He said he tries to be quiet of a morning as not to disturb his still sleeping girlfriend!?! He also informed me his exhaust is 'broken', so it has no silencer and that's why it's so loud.
(Broke for nearly 6-months and nothing to do with it being the size of a Sherman tank's 75mm cannon??? Hmmm)
If he disturbs me all this week, as is now normal, I'm going round again on Friday to see if he's got an ETA on 'fixing' the car. If not, it's
"No More Mr Nice Guy" GRRR

I was round at my sisters and noticed this in the garden: 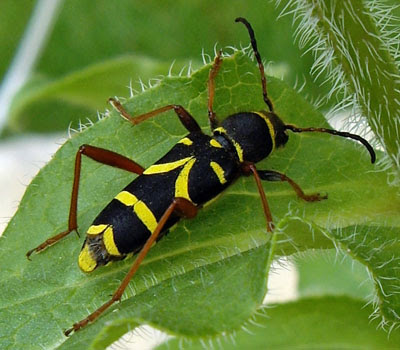 Any of you boffins care to fill me in on what this vivid insect is? 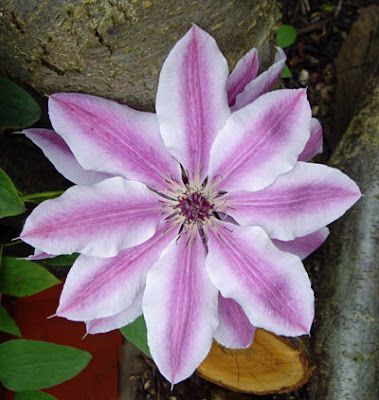 I also spotted this striking flower, so again, anyone wanna clue me in? 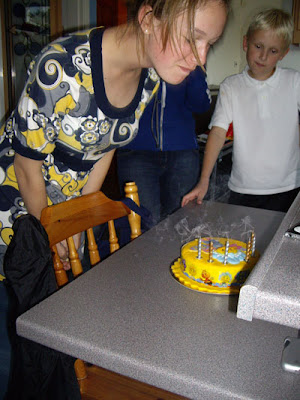 It was also my niece's 14th birthday
!!!HAPPY BIRTHDAY AMY!!! 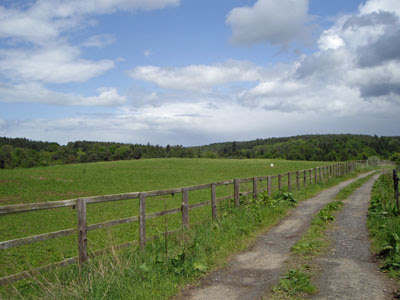 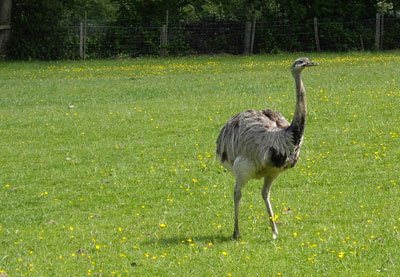 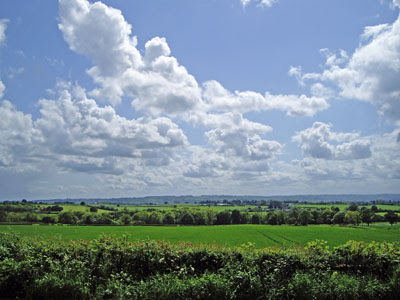 It was another fluffy cloud day 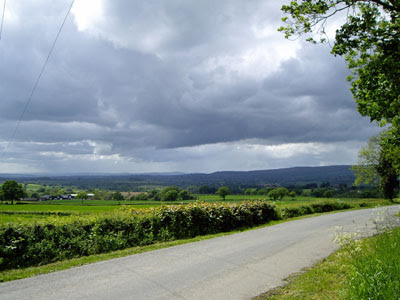 Although it did rain a couple of times and you could see the haze of distant rain heading our way.
It even got my crisp & Marmite* 'MANWICH' wet `:[ 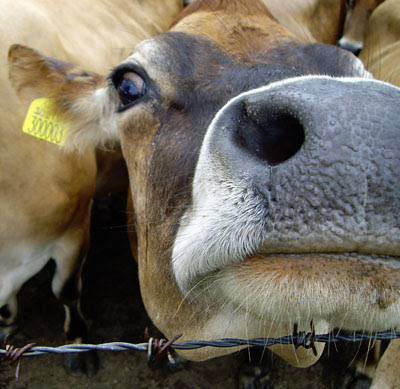 Came across a field full of lovely inquisitive Jersey heifers 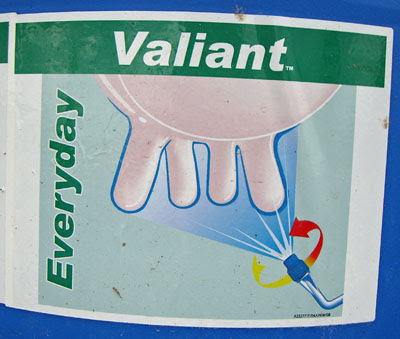 And then walking through a farm, I spotted a barrel of 'Everyday' udder wash! LOL
"Take two bottles into the shower? Not these cows!" 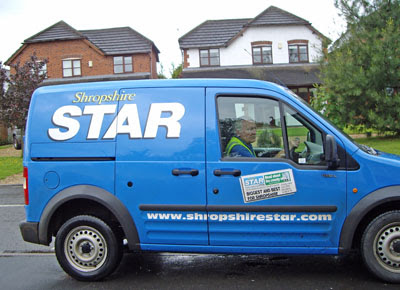 Look what I spotted!!! An official 'Shropshite Star' van... Oh my... Maybe that farmer's threat was more serious than first thought?

Quite a novelty to be at home on Saturday night, so I spent it chilling; eating lamb curry; drinking beer; watching Lost 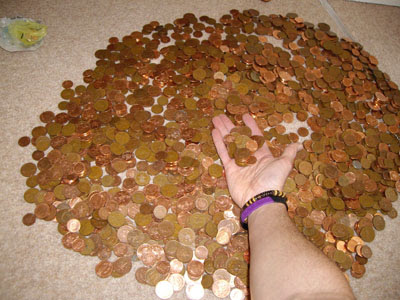 Bad idea... It took me nearly an hour to sort this little lot out! 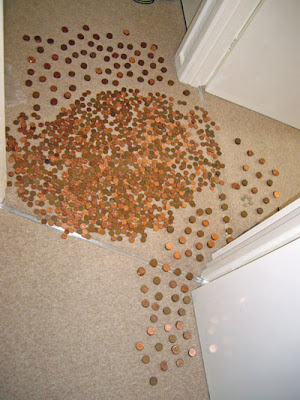 There's most of the 2Ps sorted into stacks of 5... Now for the 1Ps *sigh*
Why I did this upstairs sat on my bathroom floor I don't know :)

Sunday Night:
Consisted of:
Eating a Pea and Pancetta pizza
Watching another episode of Lost
Writing this
Listening to new chooons I've 'acquired'

Today's Top Tip: Make your partner cry when you're having a romantic meal out by phoning and telling them :[]
Scrawled by Phil

you're a rich DoGGa now HUGS.

"how do u make your lover scream during sex?"

call her from where you're having sex.

Boo:
Loaded indeed - I converted it into 'sgd' just for you :]

LOL - Yeah, I changed the original line for 'family viewing', yours works much better though :0X

Over here in the States, Postal workers are known for going "postal" and going into work and shooting everyone in sight. Just thought I'd throw that pleasantry in. I too live behind a guy who makes somuch noise all of the time. He has no job (other than to annoy me) and he is constantly either cutting trees down, grinding a stump (banging the old lady?) revving up his toxic 1970's piece of crap car with the worst exhaust you can imagine, his dogs bark all the time, his yard smells like dog crap and it wafts over to our yard or some other noise making thing. I am so ready to but a mic on my banjo and let him have it at 7 am or 11 pm. To top it off, he's just an obnoxious rude moron.

Anyway, what great shots you took, it looked like fantastic weather and a fun time. I myself am so ready to get hammered. In September, when I turn 50, I am going to get me a glass of 50 yr old scotch. they say never drink scotch that is older than you are so I'll be ready then. In the meantime, I think I'll hoist a brew or two this weekend even though the Doc says no.

You did what? You stayed home? That’s a first ;)

Good luck with your neighbour. I hope he has saved enough by now (6 months must be long enough :)) to get his exhaust fixed.

I don’t know the insect, but I think the flower is a Clematis variety

Brilliant pics. I especially like the cow….that’s just priceless! Or maybe I should say worthy of a price :)

Oh, I loved the pic of the cow! Your neighbor needs to have a bag of shit set on fire on his front porch - That will teach him! Very cool flower and bug, no clue what they are called though!

Oh no, you have neighbour toubles too... I sympathise!
It's so annoying as there is nothing you can do other than make noise back, but they probably don't care anyhow. Grrr
I don't think my neighbour is anywhere near as bad as yours, he's just a bit clueless that's all.

Thanks for the compliment Phil :]
Yeah, ya gotta have beer every now and then :]
Oh, 50yo whiskey, nice! I was drinking 36yo whiskey in Germany and it tasted fine, even being 7 years older than me! Hehe

Dakota:
I know, I'm slipping :] Off again this weekend though...

Yeah, it does put a different light on it knowing it's been broken for that long!!! Pffft

Hahaha, yes, the cow shot is cool, but I did get snotted on taking it :[

Jenny:
Cows rule!
Cor, you don't suffer fools gladly, but yes a pooh fire would get the message across. I think I'll save that one for more extreme times though :]

Thank-you phil and dakota for the happy birthdays!!

The clematis is the variety 'Nelly Moser'. Still searching for the beetle's ID

'Anonymous' was me, JG. Blogger-comments was playing up *yet again*. Grrrr!

So was it worth saving for 7 years to end up with 28 squids?
Nice piccies, btw

It's a Wasp Beetle. I know this because I had one in my lounge the other day and asked our Wilidlife Officer. And he knows these things!

Oh and you have to wash and dry a cow's udders before you milk them otherwise dirt and other nasty stuff gets in the milk and the farmer's cell count will go through the roof and he'll get penalised by the company that buys his milk.

You really wanted to know that didn't you!?

Hutters:
Erm yeah, I think it was... I just need one of those oversized Bells whiskey bottles everyone had in teh eighties so I can continue the colelction :]
Cheers, glad u like the pics!!!

Angela:
Ah, you star! All is now solved except Ostrich or Emu??? :[]
Cor, you are a fountian of knowledge today... I never knew such cow hygiene existed - Hoorah for udder wash :0)

That is one cool bug. Much better than our wolf spiders that we get here. Think practically tarantula size only perfectly harmless or so they say. Me, I still vacume the suckers up.

I'm with Dakota I'm pretty sure that flower is a Clematis.

Tocatta:
It is one cool bug, but I like the sound of harmless massive spider though too :]
Aw, poor spiddies being vac'd up :[

Yeah, a Clematis it is then by popular answer!!!

I don't believe there is such a thing as a Pea and Pancetta pizza - thats ridiculous!!

My exhaust broke a few days ago -I got it fixed straight away - I bet you wish I was your neighbour.

The size of the Yellow and black insect was not obvious - it could be Mothra as far as I am concerned...

We have wild Emus ere as well - surprising isn't it??

I do wish you were my neighbour with such broken exhaust attentiveness :]

The black and yellow insect is a wasp beetle I've been told!

The Emus / Ostriches were not wild, they were in a fenced field, but close :0)

I LOVE that cow photo. So funny, I almost fell out of my chair! The fluffy cloud day one was my second favorite :O)

Mellow:
COOL! It took me several attempts to get that cow shot and it snorted at me, covering me in snot :[ But, hey, I got there in the end.
I love fluffy cloud days :]