Shhh, don't tell my mom, but I stayed up ALL Saturday night at a party in Essex!

Last weekend I did monitors (sound on the stage) for Essex University's Summer Ball, along with a few other engineers for a PA company I'm friends with. 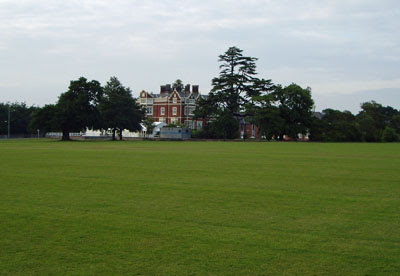 Essex Uni is a massive place and rather grand.
After setting up, Friday night was pleasant and was spent in this hotel on site. The evening meal was fab and I tried PawPaw fruit for the first time.

...After then, some sleep or a nap or even the prospect of a bed became very appealing! 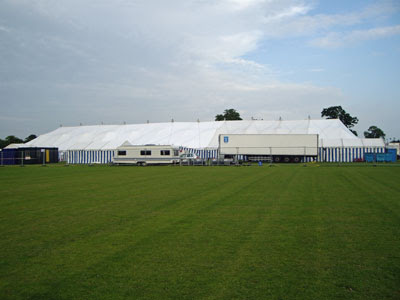 The main event was held in this MASSIVE marquee 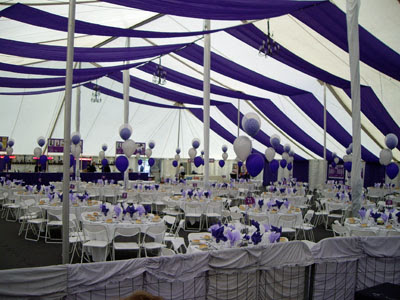 The organisers spent days setting the interior up for the guests 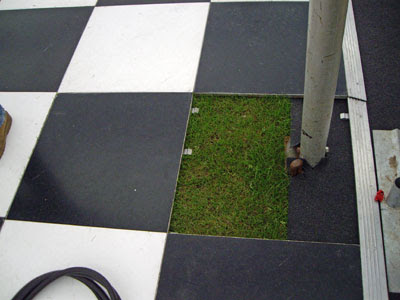 They cleverly installed a grass tile, which was rather novel ;0) 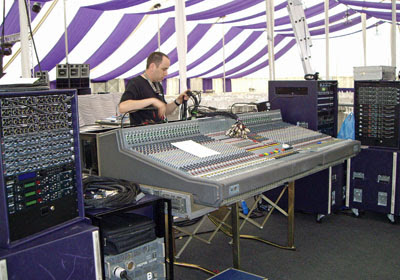 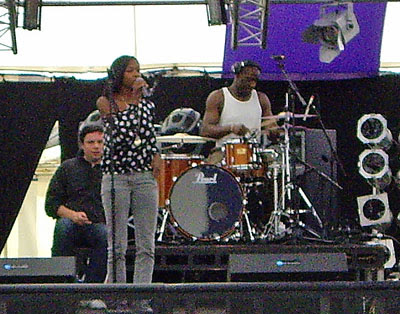 The main act was 'Jamelia'
She came in early to do a sound check ready for her midnight performance. 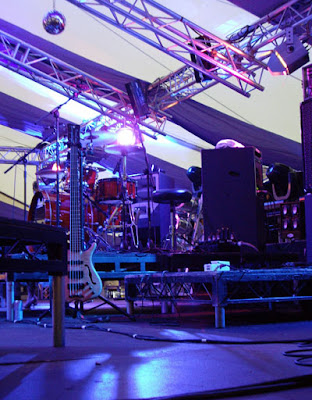 The stage was then set for the night.
Don't touch AAANYTHING... Or even think about it! 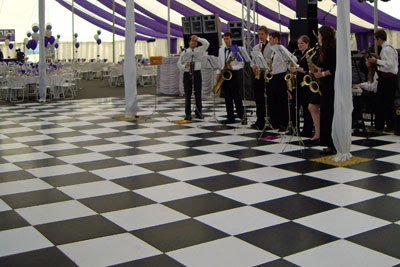 It was quite a posh do too; a brass band greeted the arriving guests 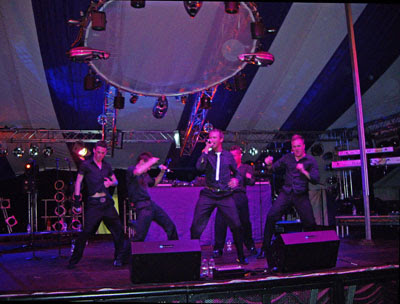 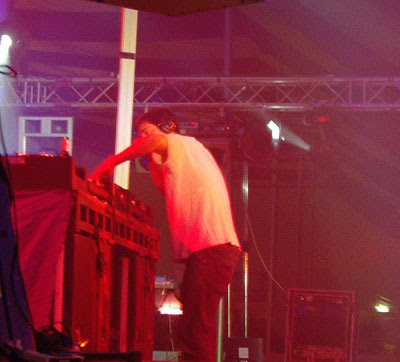 Next up was 'Colin Murray'
A DJ from Radio 1, who actually played a good couple of sets and boy he was trollied :]
He pulled a rather smart stunt of playing 'Oasis - Cigarettes and Alcohol' and went down to the audience with a bottle of vodka and got the crowd to take a swig each and pass the bottle along the front row! 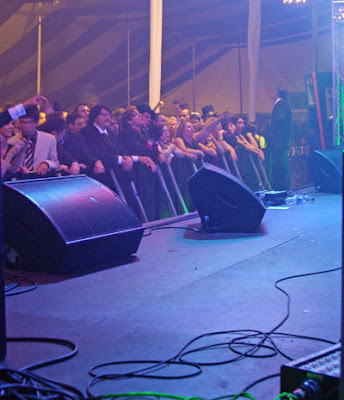 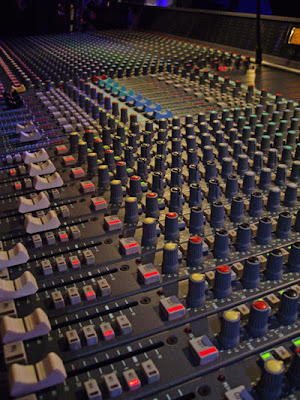 There's nowt like a mixing console to get the old noodle working full steam ahead, especially while under pressure!
Due to the usual kind of technical hitches one expects on a gig, arsey artists and having 1/10th of the time actually needed, Jamelia's set was a little stressful at the start, as was the preceding 'Queen' tribute band.
Phhheeewww is all I will say :[] 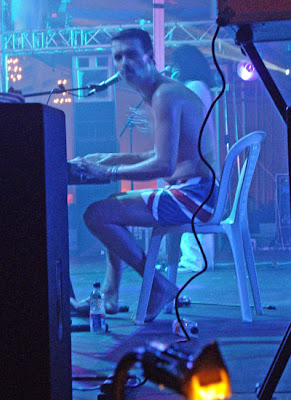 The Queen B tribute band front man ended up in his boxers by the end of their set, as you do!

YAWN
Local DJs then played through until 5:20am!!!
...Then we all packed the PA system away
...Then drove home 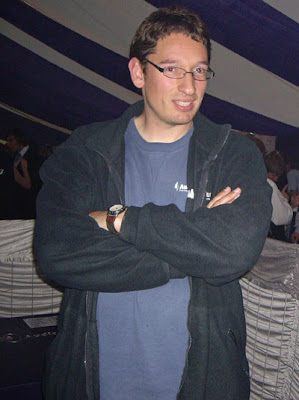 Essex wide-boy Stef, the owner of the PA company Audio Plus.
At gone 6 in the morning, he turns up from being at another gig to lend a hand.
Having zero sleep, he still manages to completely crack me up and have me in tears of laughter with his, quite frankly, rather piss-taking humour. :)

Today's Top Tip: Fool everyone into thinking you have just eaten an apple by rubbing your tummy and saying out loud, "Mmm! That was a lovely apple."
Scrawled by Phil

Thats pretty cool. Seems like everyone I know is turning out to be a closet sound engineer at the moment. Although I suppose I only know you electronically so far, so not sure if that counts.

That top tip is absolutely marvellous. I might just try it...

You lead a very interesting life Dogga, I'm happy for you.

Rob:
Hehe, that's becuase everyone is a sound engineer at heart!
Yeah, electronic / virtual DoGGa is almost as good as the real thing... no, actually better :]

Phil:
I do lead an interesting life, although I an knackered :]
Hehe, the apple yes, mmm, I gotta go for two fillings next week :`(

*rubs your temple instead of a fake apple*

so you poor thing, having a mother of a headache eh?

p/s "fake that" is horrigible

I used to work a mix of days and nights. Result: permanent headache.
I bet those kids at Essex Uni paid a large part of their loans for that little gig

Wow, Essex U looks beautiful.
I'd love to take a tour.
The tiles in the tent are cool!

Poor Dogga..hope your headache gets better soon.
I suppose you've tried Motrin/Ibuprofen? I take 800mg three times a day until the bugger is gone

Fake That were slightly, I dunno, fake. AND there was a tubby one - Since when was there a tubby one in Take That? :0)

Jenny:
'Cos you live like a billion miles, but basically you're not posh enough :0)

Hutters:
I wasn't a cheap do, by any stretch of the imagination - Prob government grant? :]
What was best for your headaches sir?

Kayla:
It's a fab place, from what I saw of it anyhow. There were also large fountains etc behind the hotel.

I hope my headaches get better soon too!
I don't know what Motrin is, but when it gets bad, I take 800mg Ibuprofen and 1000mg Paracetamol - That normally does the trick.
Ship me some Motrin over would ya? :]

Andre:
I know - Not something I'm going to be making a habit of :[]

Oh, that's how it is! If I start posting pics of my ass...will that help my poss status???

Jenny:
LOL - Nope that's what I do, hence I'm not even slightly posh.

However, if you did that it would make me smile a lot:)
...and if you do, you're definitely invited to the next one!

that tile is a novel idea! I was at a wedding this past weekend that was held on the lawn under a tent, and everytime I stood up from my chair my heels sunk into the ground! that one would have gotten a grr-o-meter rating of probably 8/10

Day 4 of a headache? You should get that checked out...

and where's the Video top tip?

Photogirl:
To be honest, I didn't get the heel problem personally :0)
Phew, that's a high GRRR rating though :[]

Four day headache! AGH! I hope it's over with by now! (and caught up on your sleep too!) Glad you did have fun though :O)

That Radio one geezer - is it true he was arrested for indecent exposure?

Mellow:
Headache well and truly gone thanks... for now :[]
I think PawPaw fruit is actually papaya? Very fleshy, a but like melon!

Mutley:
The loos were fine - portaloos, but clean :]
I have no idea if Colin was arrested for indecent exposure, but it wouldn't surprise me and hats of to him if he did LOL :]

where u at love?