A trip to Lapland just wouldn't be complete without visiting some huskies, so I partook in a 15km husky sledding excursion, across a vast frozen lake.

The husky farm was home to no fewer than 115 dogs of mixed breeds - As you can imagine, I thought I'd died and gone to heaven :] 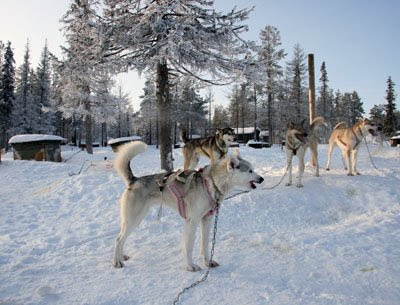 The hounds are very lively and bark excitedly when they know they are about to go on a run. 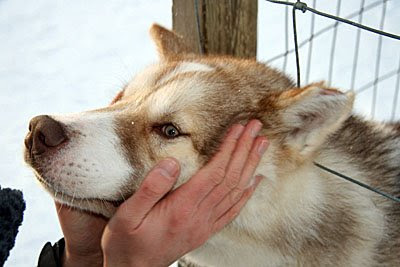 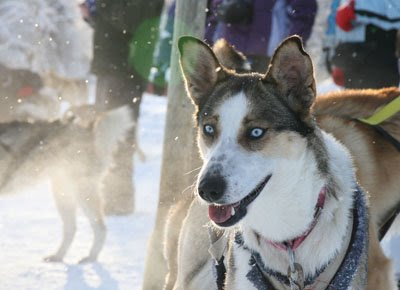 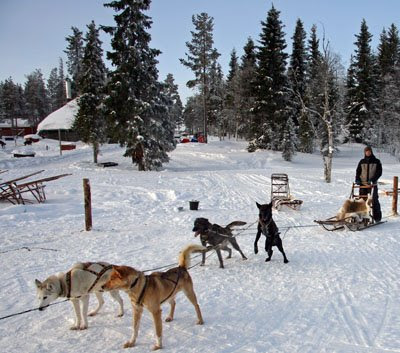 Our team of huskies. 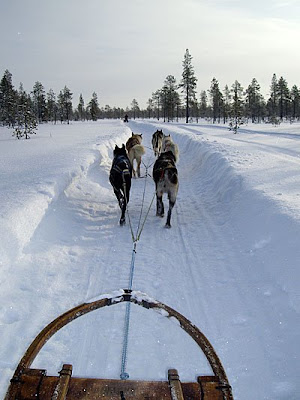 
A very civilised form of transport. 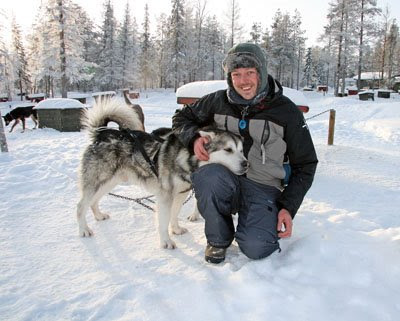 An out of breath Malamute came and rested its head in my lap! 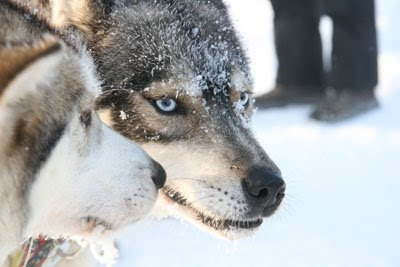 The dogs get pretty hot and roll in the snow afterwards. 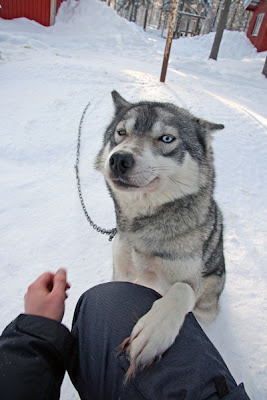 I crouched down by Luppo here and she walked over and placed her paw on me. 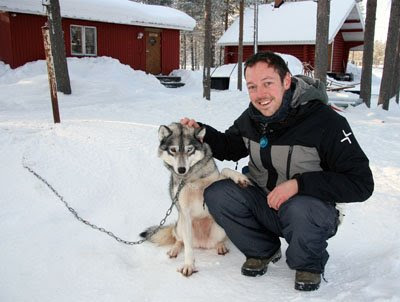 I wanted to take her with me :[ 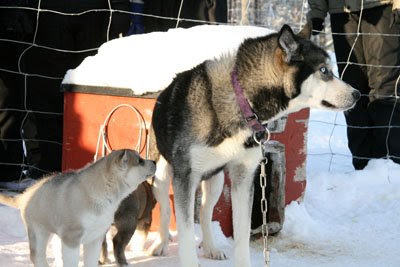 The farm had 3 new arrivals 6-weeks ago. 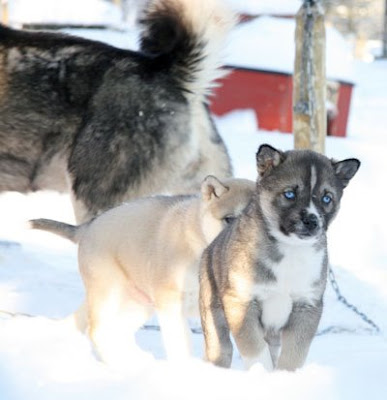 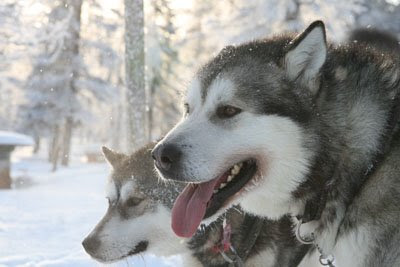 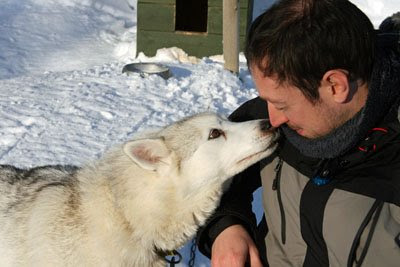 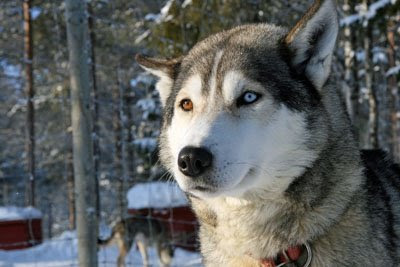 Probably the most camp clapping I've ever seen too :]

On one of the evenings, we went on a Lappish night.
Having no idea what to expect, I was pleasantly surprised by the fun we all had! 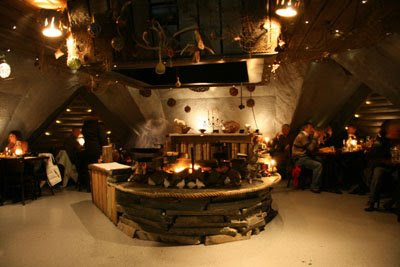 A fantastic open fire in the middle of the hut. 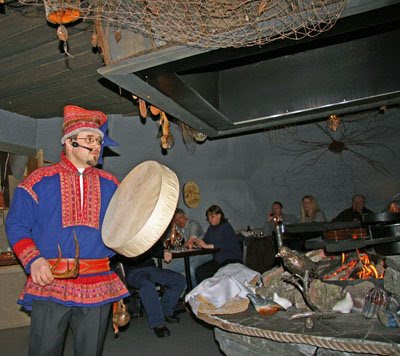 Our entertaining host for the evening. 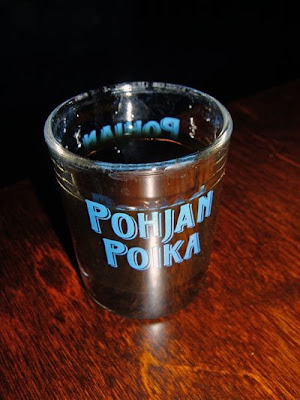 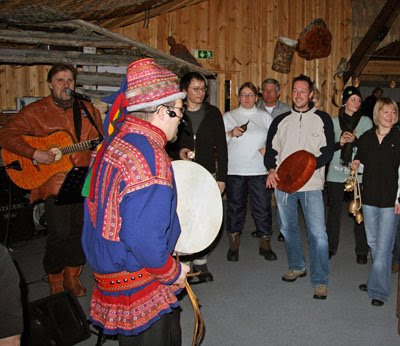 Ah, I was (un)lucky enough to be picked out and had to play this drum for a whole song!
...and I genuinely fear being picked out of an audience, bah... 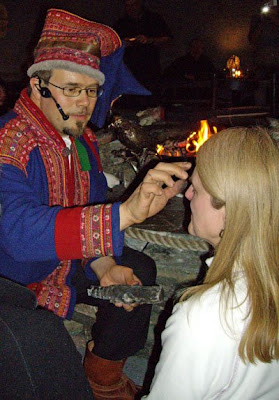 At the end of the night, we all had to kneel on the floor and receive a reindeer blessing.
Basically being made to make a noise like rutting reindeer while being drawn on with charcoal from the fire. 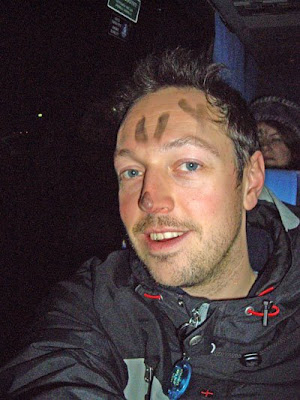 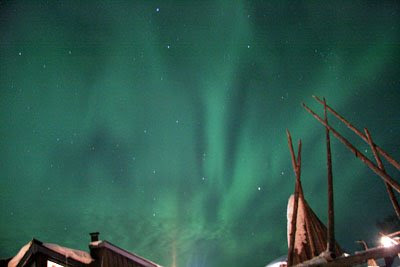 When we all left the Lappish night, the northern lights had come out to play!

That's it for the penultimate episode of Finland folks.

Today, I'm Most Angry About: Still having a hangover two days after a night out :(
Grrr-O-Meter Rating: 3/10

Phil - great to meet you and Andy in Levi. Superb pics in this and part I, as my own certainly didnt do it justice..thanks for showing the way down from the mountain...

Great pics. I hadn't read good things about Huskies but yours seem OK.

Martin:
Hey Martin!!!
Likewise...Nice to meet you guys too :]
Glad you like the pics and maybe I should publish an Aurora Trek mountain guide for Levi LOL.

Thanks for stopping by :0)

Hutters:
Cheers dude!
Huskies are mostly fine, but as with people, there will always be a bad egg or two.
I asked the farm owner about behaviour and she said they are ALL fine and would not tolerate badly behaved dogs there :]

The bi-eyed husky is amazing! I think they are beautiful dogs - but they are definitely not 'pets' are they? What a great holiday that must have been

Snowqueen:
Bi-eyed dogs are quite common and it really stands out!
No, huskies are not the best pets, unless they have a job to do and are kept very occupied.
Shame really, as they are so beautiful :]

OH wow, what amazing Huskies! I love the puppy!

Once again, superb photos and video. But wait, shouldn't you drive that sled with BOTH hands?!?! ;)

Wowee - yet more great pictures! The huskie look beautiful, and certainly seemed to take aliking to you. Your hosts outfit was less attractive - but I'm sure it got better as you drank more and focus was lost.... Hope the hangover's gone!

Linda:
Thanks Linda!
Ah, there are two of us on the husky sled - we stopped half way round so the other person (Andy) could take over driving :] There's no way you could do it one handed, as you're only standing on the sled runners about 2 inches wide!

Graham:
Huskies have amazing looks and so varied!
I drank a considerable amount on that Lappish night - hense I actually got up and played in the band :0)

Beautiful pics, as usual and very attractive dogs. I think this was definitely a very worthwhile trip.

LOLOLOLOLOL!! I loved the Top tip only because I have done it!!! Good one;) Those pictures were awesome. Glad you can make so many great memories for yourself. Too bad you didn't get to take one of the dogs home with you, They're beautiful dogs!

Kat:
It was a VERY worthwhile trip - I experienced sooo much in one week :]

Crystal:
Ahh, I want photographs of your space age dog, cat or whatever! :]
I would so do this if I had a pet.

Lots of good memories and yes, I would one of those dogs, but they are happy out there doing their husky stuff :0)

Naww the huskies!
I want to hug and kiss them.

Rebecca:
Hehehe, I'd go back and do it again :]

Come on, so soft & furry, what's not to love. Ok, the huskies are cute too :p

Those dogs are beautiful! I am especially fond of the blue eyes...so gorgeous.

And that last pic of the norther lights is incredible. I really am jealous of this amazing trip you took!

Hey Dogga, I changed my URL site name. Its everydaylifeloveandhappiness.blogspot.com

I noticed that Google engine hits on me WAY too much and just to protect my site I made it a little more difficult to do. Anyone can just type in my name and it pulls up. For people like the EX husband i'd rather not make it so easy. Just change it in your links section and it should change it. Hope your having a good day;o)

Great stuff again Dogga. Just where in Finland was it? I want to go!! You should get a commission from the Finnish tourist board!

How far was the husky ride?

Yeah, think I could get commision from my blog? - now that would be cool!

The husky ride was about 7 miles I think around a frozen lake :]