What A Rockin' Weekend...

Well, last weekend was an absolute 'one for the history books' of a birthday weekend!!!

Friday morning, saw Andy, Rich, Lewis and myself loading PA gear into the back of two hire-vans and driving off to a field in New Radnor in the middle Wales.
Upon arrival, a lot of familiar faces became apparent from gigs I've done in the past, which was nice and then, in the sweltering heat, the PA slowly went up. 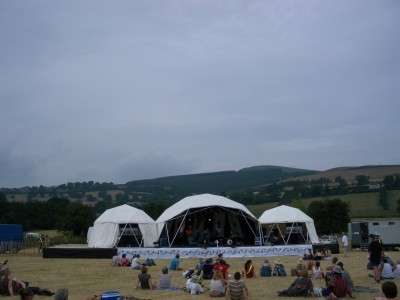 What an idyllic backdrop to a main stage at a festival. It almost looks out of place... The stage that is, not the hills, duh!

We were joined by more friends, in the form of Hal, Joe, Bee, and The Silver Fox who came baring cakes and birthday pressies! Yay... 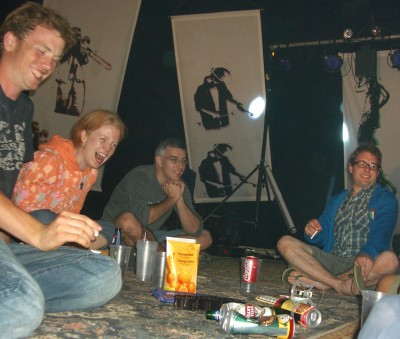 Hal, Bee, Big Rich and Joe slightly inebriated with the use of our rather fetching 'floor bar'! Doesn't it look classy? 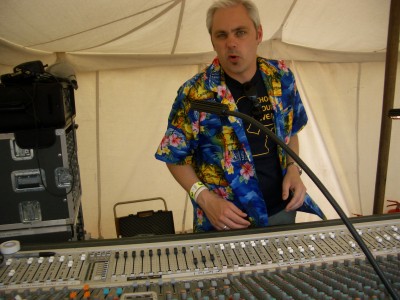 The Silver Fox, our FOH engineer for the weekend! Nice shirt mate. 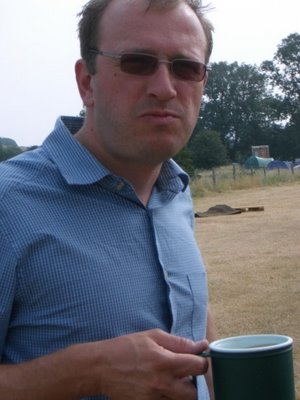 Andy enjoying a rather decadent self made liqour coffee. Nowt but the best for our crew!

After a late, but needed public house visit for a most spectacular curry, we all gathered on stage for beers and I subjected all to a stunning selection of MP3s off my phone that I routed through the monitors. Hey, it was my birthday, so I listened to what I like! :] 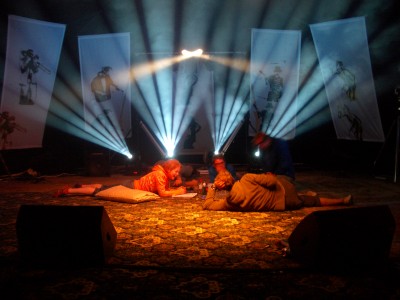 Bee, Dogga and Joe chatting on stage on a warm summer Friday night while the lighting guys set-up their lights.

Saturday morning consisted of eating a Big Rich Breakfast Special and shaking off a hangover before the first band arrived, who comprised of rather a lot of members for the first band of the day, so not ideal, but after a few technical hitches, we got through it all OK! 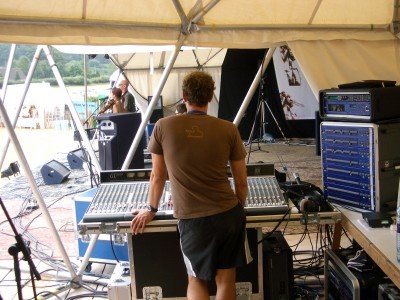 Dogga on monitors, with some nice smaller bands to ease him into the afternoon! 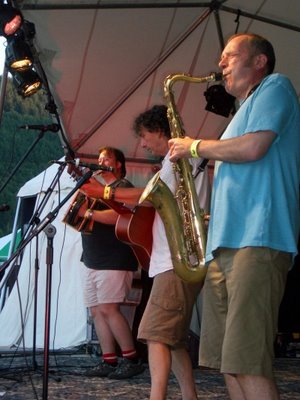 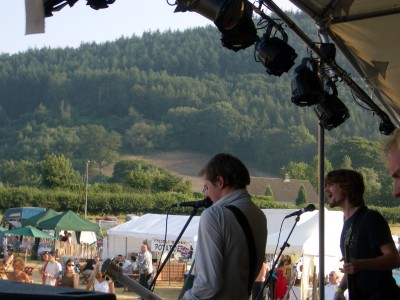 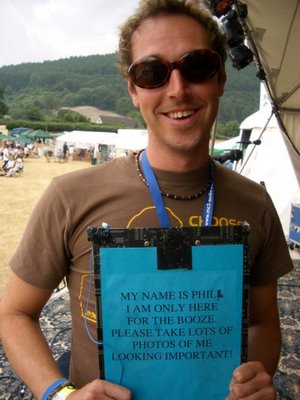 Don't I look fine wearing Bee's sunglasses and using my special clipboard that was made for me, by piss taking engineers, last Glastonbury on the John Peel Stage? How rude. 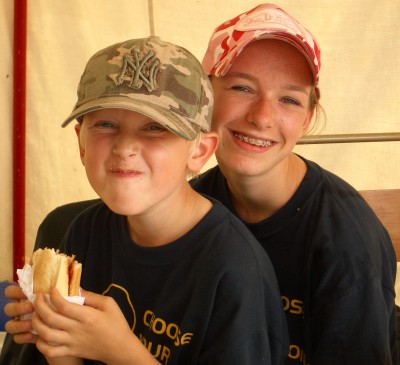 Nephew and Niece... Absolute angels or what? NOT!!! 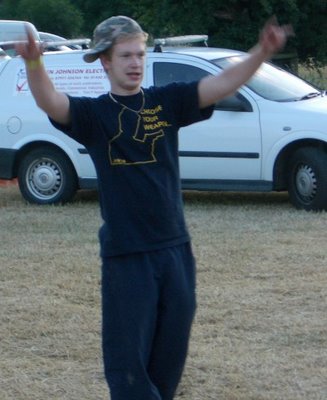 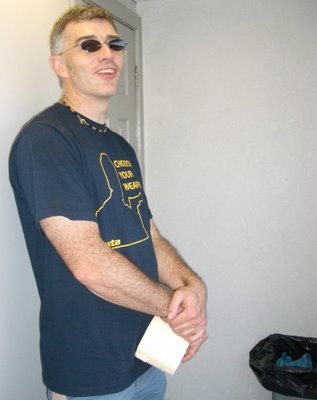 I caught Big Rich in the loos with a roll of soft Andrex toilet paper he had brought himself and I just had to take the picture! I had no problem with the rough 'Military Issue' toilet paper provided, but then I guess some of us are tougher than others. TeeHee 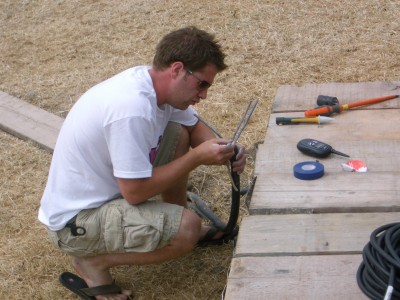 A certain member of the crew *cough* Hal, drove a quad bike and trailer over the generator mains cable, severing it in two, meaning the power was off at main stage for a while! Ooops... Sparkies to the rescue though! 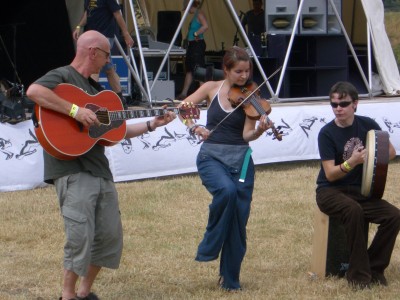 The band that was on-stage at the time simply got off stage and did an acoustic set regardless of no power, so all was fine and the crowd loved it.

Ian Marchant in the crowd, if anyone knows who he is!
After the power cable was fixed, we experienced an hours rain which doesn't do much for the electrics and electronics on stage. After raising all the high voltage stuff above water level, tarpaulins were brought in to create make shift shelters for the gear.

However, water had gotten into the lighting system and everything went horribly wrong, taking the power out left, right and centre and we lost all power to the main speaker system, meaning I had to improvise with speakers on stage which I pointed out towards the crowd before they could patch my desk in to control the main speakers as well! Phew, what a nightmare and I felt so sorry for the bands who experienced the power failures.
We got it all fixed for the headlining band anyhow! 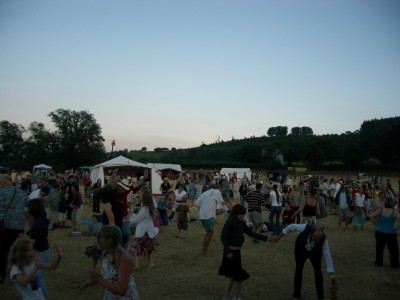 People dancing at twilight! A great sight at a summer festival! 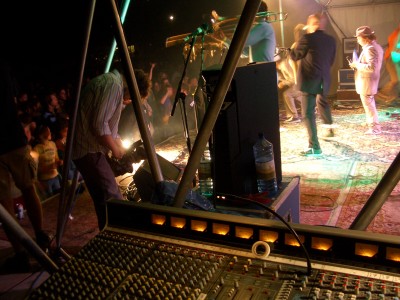 The finale band 'Babyhead' where a bit of challenge, due to the amount of channels used, band members on-stage and they are very energetic, and they also like it real LOUD!!!

A bit of a challenge, but good to let rip on the headline band. I felt rather exhausted after the day's work and knew the dreaded packing-up was imminent, but a fun night was had first! :[ 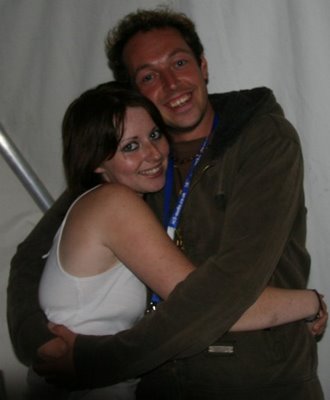 I made a new friend called Rhee... 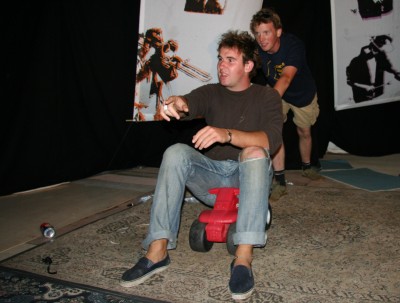 Hal pushing Willlow off the stage' in a Jack Ass style' on a child's toy! Talk about funny... 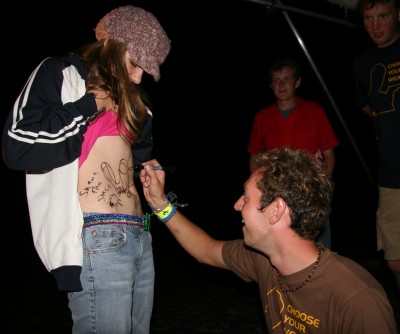 Signing 'Dogga' across some random girls stomach! How could I say no eh? :] It doesn't look like I'm enjoying it much by the expression on my face anyhow... 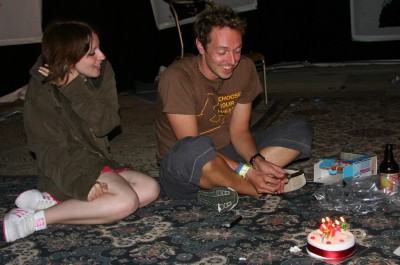 Cutting my Birthday cake at some ungodly hour. Cake courtesy of my sis and '29' shaped candles courtesy of Stu 'n Kees! Sorry about the knife Rich... Whoops... I lost it!
Much laughing and drunken behaviour continued, including plenty of body signing in various places, some of which will not be revealed on this blog, and then I saw the sun rise. O oh! 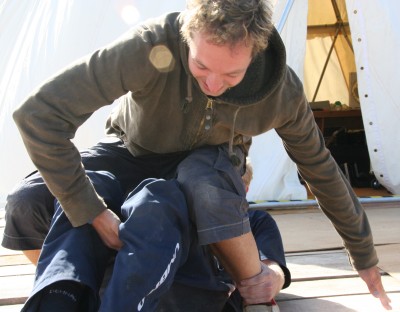 Lewis was lying in the sun Sunday morning, nursing a bit of a hangover, so me sitting on him probably didn't help his predicament, but it made me feel better!

Today, I'm Most Angry About: A rather disappointing prawn mayo sarnie at lunchtime.
Grrr-O-Meter Rating: 0.5/10
Scrawled by Phil

Sarah:
Aye, that she is!

Angela:
Yeah, Ian is a writer, amongst other things. He's had success with books about trains and often appears on the radio from time to time too. I've known him vaguely for years through gigging, as he's been the compare!

Rhee:
Aww, something saucy could have inadvertently been posted, hehehe.
Yup, a good weekend indeed. x

Yoda:
Thank you, a most enjoyable time was had! :]

So jealous! Gutted I couldn't make it :( Great pic of Stu! The homeless guy that hates my hair loves that shirt. Make of that what you will :)

that was a fantastic festival!! wheres the pic of me wiv lewises bling on n your jacket? lol. it didnt beat sheep music but it was still fun!!

Kees:
Yeah, shame you were ill... Much missed!
Why Mr Fox is homeless I'm not sure, but I love your hair, so there!
I had mine redone on Friday... Mmm more dying and styling etc! :]

Niece:
It wasn't sheep music no, but it was a good one dayer! Glad you enjoyed yourself!

Hutters:
Oooh, I wanna see your sofa now. I'll scout your archives for a pic! :]

The sofa was 14 beer vouchers for something I'm never going to have the breath to re-inflate!

Mr Hutton:
Hahaha, I can hear E-BAY calling!!!
Or post it directly to me :]

Here are some links that I believe will be interested