Well, here it is folks, the moment you've been waiting for..?
Me in that music video:

A couple of months ago, I got myself a part in a music video shoot for a new band called 'Grinderman' (fronted by Nick Cave) and they have finally released their debut single 'No Pussy Blues' and I'm in the video!

It's even been shown on television - on BBC 2's The Culture Show, although I missed it, but got a text off a friend saying I'm on TV! :)

I'm the out of focus guy walking from right to left infront of the camera and then I'm walking out of the room in a dark stripey shirt holding hands with my mate Kees.
Then I'm basically half-nekkid and attached to Kees by the lips - we're then undressing each other in a bathroom and doing what girls and boys do best for the rest of the video... Spot me if you can!!! :0)

If you have trouble viewing the video, you can view it directly HERE

I'm off on a skiing holiday in Switzerland tomorrow, so see ya'll when I get back!

Today, I'm Most Angry About: Having to set an alarm for 4am to be at the airport!
Grrr-O-Meter Rating: 1/10

Today's Top Tip: Cinema goers. Please have consideration for pirate DVD viewers by having a wee-wee before the film starts!

My 10yo nephew recently introduced me to two claymation characters, 'Purple & Brown', from the creators of 'Wallace & Gromit'.
I've never seen them before, but boy do they make me laugh.

The creator's sense of humour is genius and so up my street, so here's my top three favourites, but there are dozens more if you just search for 'Purple and Brown' on YouTube!


... sorry about the toilet humour!

Today, I'm Most Angry About: Being woke up by my new neighbour's car, that's fitted with an ENORMOUS and VERY LOUD big-bore exhaust, while having a Sunday afternoon nap... He'll also get up for work around 4am Monday morning, so I have that startled wake-up to look forward to as well!!! Grrrrrrrrrrrrrrrrrrrrr... :[
Grrr-O-Meter Rating: 7/10

Today's Top Tip: Save petrol and the environment by pushing your car to your destination - Invariably passers-by will think you've broken down and help :0)
Scrawled by Phil 13 comments: Links to this post

Last week, as mentioned previously, I drove down to London to attend the Total Production Awards 2007. 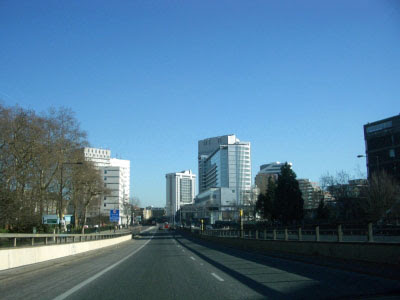 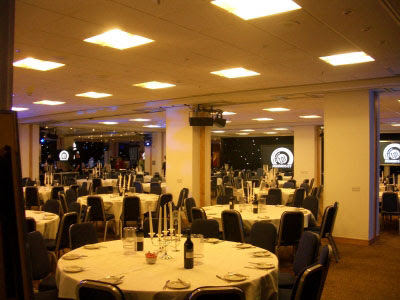 The main room at the start of the evening - The calm before the storm...

It was a fun evening, although a touch nerve racking to start with, as the place was rammed with industry friends and customers. Everywhere I turned there was someone I had to make polite conversation with, and I'm not great at that - although this was nothing copious amounts of alcohol didn't sort out! :) 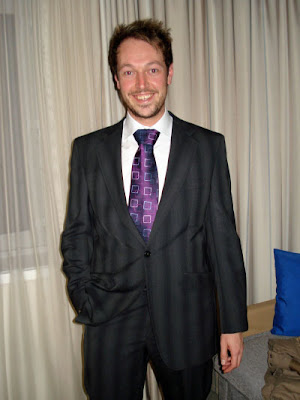 A rare site of DoGGa in a full suit!!!
Is it just me, or is my head too big for my body in this picture?
Maybe my tie's too big? 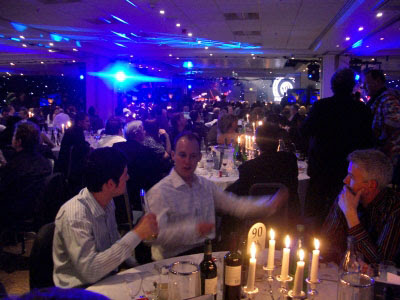 Our candlelit table of ten. Micheal Eavis was sat on a table behind us! 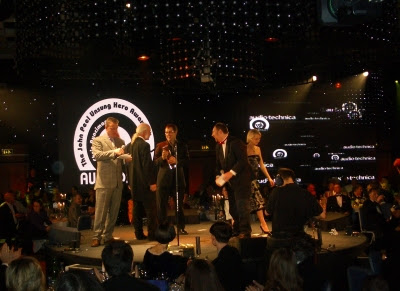 After the big eat, the awards ceremony got underway.
That's Suggs on the far left, presenting the evening! 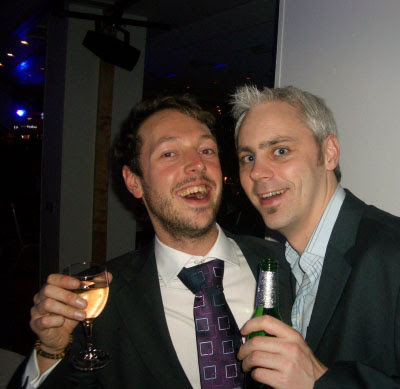 Me and The Silver Fox, who decided it would be a good idea to give me a piggyback through the main bar, which got a laugh or two :0)

After much fun, it was getting late and I realised I had drank far too much wine, so headed wearily back to the hotel room *Cue memory loss* 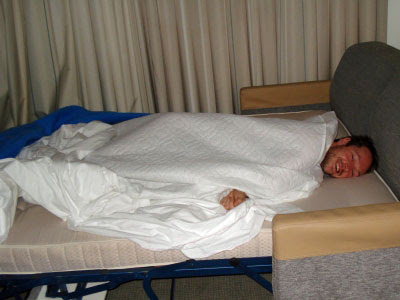 This is me in the morning laughing my head off as my room-mate Andy, who got in an hour after me, started telling me and showing me what I had done...

1. I had completely trashed the room (no breakages) so much so, that Andy actually thought someone else might be in the room or had trashed it
2. Evidently fell asleep in Andy's bed before getting into my own and left it in a mess
3. Removed Andy's quilt cover, for no reason whatsoever, and threw it across the room (See picture below)
4. Climbed into my own bed and not being able to find the quilt or pillows for it, climbed under the mattress protector instead and slept in that (See picture above) 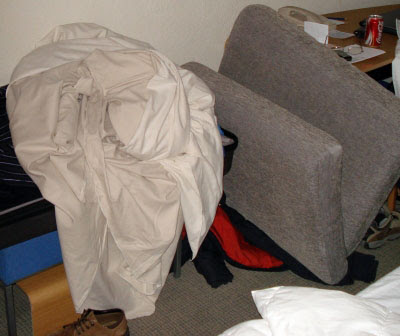 Andy's quilt cover over the other side of the room LOOOL

After a tidy up and shower, we all went for a good-old-proper-greasy-English-breakfast-fry-up and I spent most of the morning repeatedly going into giggling fits at what I had done to the hotel room the night before in my drunken stuper :) The evils of alcohol eh!!!

Today, I'm Most Angry About: Myself, as I ate a whole bag of 'Chocolate Nibbs' at lunchtime, when I'm supposed to be trying to loose some weight... Grrr... I don't even have a sweet tooth.
Grrr-O-Meter Rating: 3/10

Today's Top Tip: Fool your next-door neighbour into thinking you have more stairs than them by banging your feet twice on each step!

A couple of days ago, England had a massive dump of snow.
It's the most snow we've had in eons, and I was surprised to wake up and see my street looking like this: 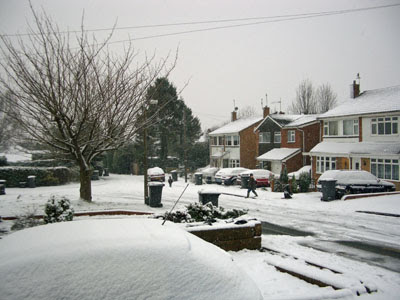 Check out next-door's car in the foreground... All you can see is the aerial poking out! 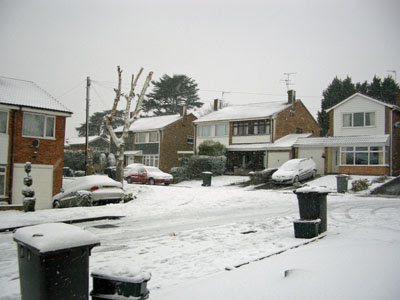 I went to drive to work as normal, but couldn't get up this slight slope to top of my street, even after multiple attempts and run-ups, but some passing strangers saw me struggling and pushed me up... Aw, what absolute stars eh!!! :) 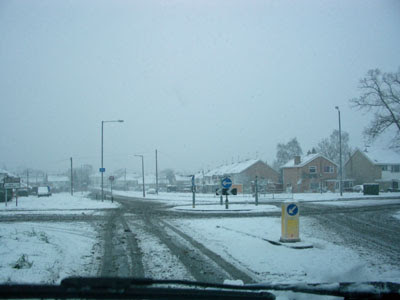 The roads were atrocious, so I decided not to carry on to work, but to go sledging instead and attempt the roads later... A much more sensible idea me thinks! 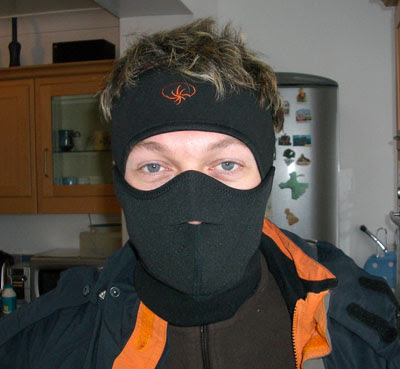 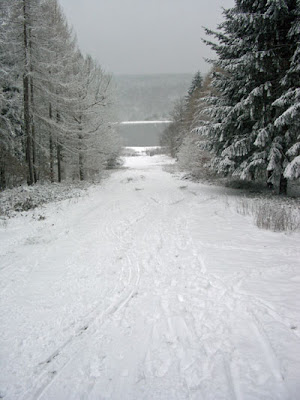 This firebreak at Trimpley reservoir makes an ideal sledging run 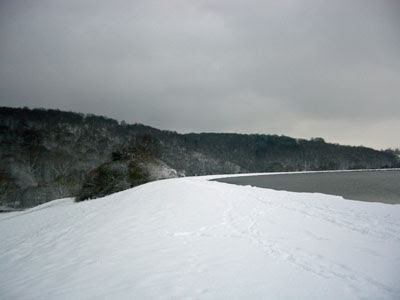 Trimpley reservoir - My water source, so don't wee in it please!!! 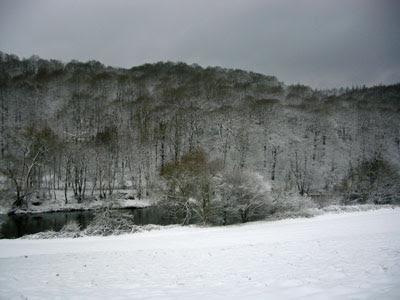 The River Severn.
(These photos are taken in colour, honest guv!) 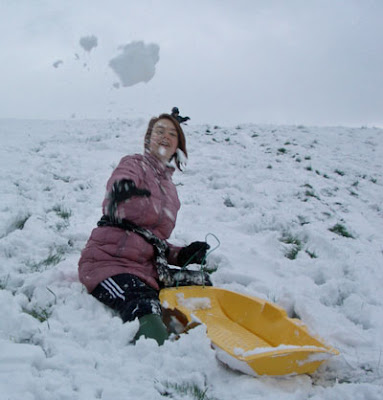 "INCOMING SNOWBALL"
My niece throwing a snowball at me girlie style :]

WAR:
After making it to work, another big load of the white stuff came down, so there was only one thing left to do...
An XTA snowball fight in the car park of course:
Production & Test (from downstairs) Vs R&D (from upstairs)
It started off fairly sedate, but then a surprise attack from the rear turned it into complete carnage, but the leader of the counter-attack, Lewis, got his com-uppance when we shouted "PILE ON" and did just that, stuffing much snow up his top too... He came back inside shaking like a leaf from the cold... Bless :0)

It took me over an hour and a half to get home (normally 10-15 mins), as rear wheel drive + wide tires = Rubbish in snow, Grrr.
Duncs pushed me off works car park, but I only made it around the corner, as I couldn't get any traction up the first set of traffic lights and had to come back to work, ditch 'Penelope' and get a lift back with a mate in a 4-wheel drive. Hoorah!

Today's Top Tip: Make house-guests believe your home may be bugged by running your hands under tables and inside lampshades, then turning on a tap on every time you speak. 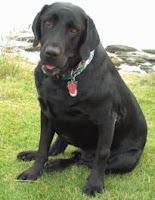 A guy is driving around Dublin when he sees a sign in front of a house saying: 'Talking Dog For Sale!'
He rings the bell and the owner tells him the dog is in the backyard.
The guy goes into the backyard and sees a Labrador sitting there.
"You talk?" the guy asks.
"Yes" the dog replies.
"So, what's the story?" adds the guy.
The dog looks up and says: "Well, I discovered that I could talk when I was pretty young. I wanted to help the government, so I told the Garda about my gift, and in no time at all they had me jetting from country to country, sitting in rooms with spies and world leaders, because no one figured a dog would be eavesdropping. I was one of their most valuable spies for eight years running."
"But the jetting around really tired me out, and I knew I wasn't getting any younger so I decided to settle down. I signed up for a job at the airport to do some undercover security wandering near suspicious characters and listening in."
"I uncovered some incredible dealings and was awarded a batch of medals. I got married, had a load of puppies, and now I'm just retired."
The guy is amazed and he goes back in to ask the owner how much he wants for the dog.
"Ten Euro" the man says.
"Ten Euro?" exclaims the guy, "but this dog is amazing. Why on earth are you selling him so cheap?"
"Because he's a liar. He never did any of that shite!"

Today, I'm Most Angry About: The amount of fuss the media have made today, becuase the UK has some snow forecast! There's a lot more important things going on than 'possible snow' Grrr, idiots...
Grrr-O-Meter Rating: 2/10

Today's Top Tip: Create instant designer stubble by sucking on a magnet and dipping your chin into a bowl of iron filings. :0)
Scrawled by Phil 11 comments: Links to this post

This weekend, I'm off to London for a spot of sight seeing, boozing, restauranting* and theatregoing, but the main reason for the trip, is to attend the Total Production International Awards.

The TPI awards are like the reverse of the Brit Awards, as it's for the live production industries who make the shows and tours happen. E.G. The PA Hire companies, who provide the sound for the artists - the catering companies, who feed the crew and artists on tour - the trucking companies, who drive the equipment from venue to venue - the security companies, who... You get the idea... Sound engineers, Lighting show designers etc, etc...

Categorised awards, based on public votes, are given out to these companies and people, for one reason or another.

It's a fun, glamorous night, and this year it is being hosted by Suggs!
If you don't know who he is, he fronted a very successful band called Madness.

Today, I'm Most Angry About: Spending all day at work, reinstalling Windows XP Pro on the accountant's poorly PC, but having to install it not once, not twice, but THREE times before it would work!!! Grrr, I love you Bill Gates :[] P.S. It's now fixed Helen :0)
Grrr-O-Meter Rating: 3/10

Today's Top Tip: An elastic band, carefully stretched over work's accountant's LCD monitor, makes an excellent launching device. Flick one end and off it goes across the room and out the door! A rather impressive range, I'm sure you will agree :0)