A few weeks ago, four of us amigos went on a lads' weekend to Wales, and although admittedly there were no titty bars involved, there was plenty of gambling, boozing and general lewd behaviour :] 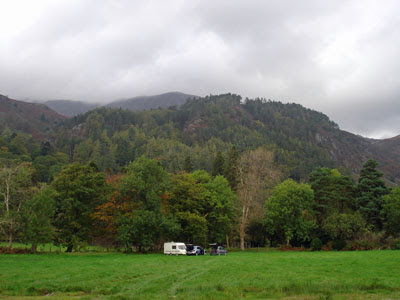 Our pitch on a deserted campsite at the bottom of Cadar Idris, the highest mountain in southern Snowdonia!
The mass you can see in the background are the mere foothills to this monster; the summit is way up in them there clouds. 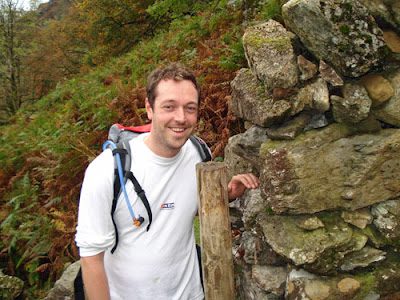 What a picture...
All of ten minutes into the accent, I'm knackered and leaking badly.
You should have seen how I looked at the end! 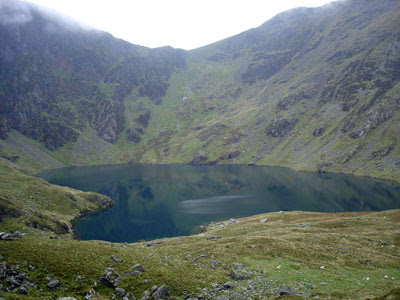 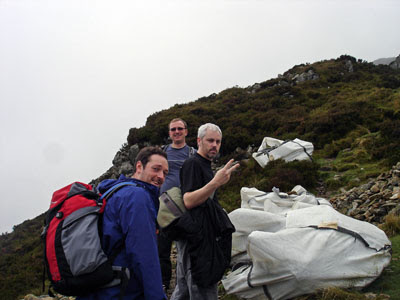 They* say "actions speak louder than words"...
The Miserable Fox shows his appreciation of physical activities! 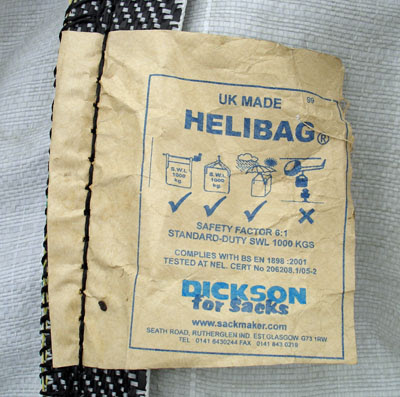 They* are in the process of improving the main path, hence all the white 'Helibags' full of granite in the previous picture, and yes, that's right, bags for helicopters, how cool :0) 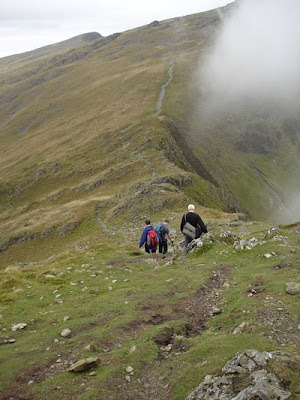 The last unforgiving slog into the clouds and to the top 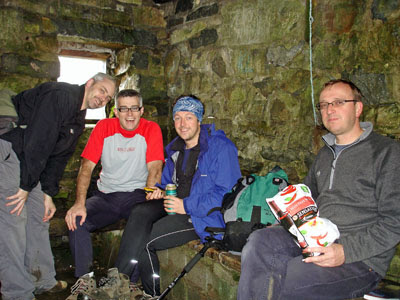 A small mountain hut can be found at the summit.
A few of us once slept the night in here on the floor - it was rather chilly, to say the least, as the hut has no door and clouds would spookily blow in.
...and yes, I do like to dress like a washerwoman from time to time :0) 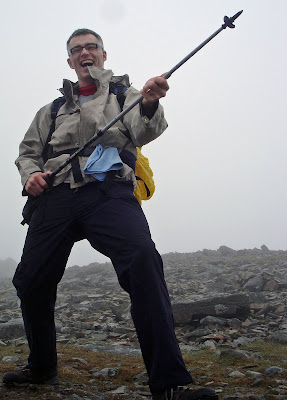 Rich, you are wearing a rucksack and that is a walking pole, you are NOT a ghostbuster...
Although we didn't see a ghost all weekend, so maybe I'm wrong? 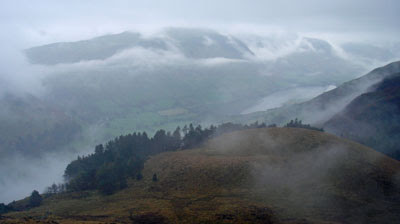 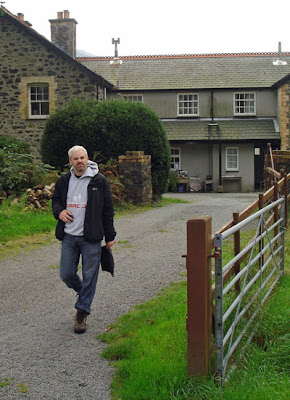 
Next up, was a greasy spoon fry up breakfast and then an afternoon of quad biking 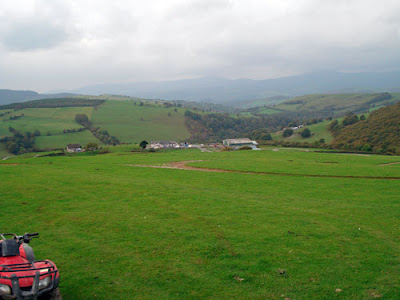 The quad biking site was nestled high up in the Welsh hills and the course was brilliant.
You were issued with protective clothing and quad bike each and taken across miles of fields, through varied woodland and even up and down quite sizable streams. 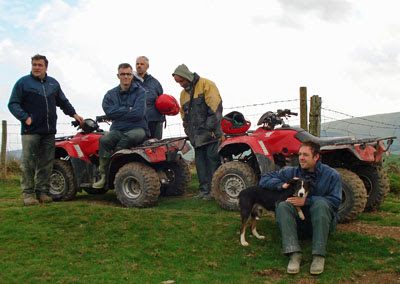 Half way through, we all stopped for a breather and I fell in love with the farm dogga 'Perol'. An absolutely top dog and the hound even rode on the back of my quad for some of the course, pushing in close to me to keep balance :)

Today's Top Tip: [Wise words once sent to me from Sarah]: "Omigod I am so hungover! You should NEVER, under ANY circumstances, go all day without eating, then have 5 beers, 2 shots of tequila, then 2 more beers, another shot of tequila and then 1 more beer"

No, this isn't a post about my hard disk size, although I am running out of space on my 80GB SATA drives, due to too much... I'll stop! :]

I haven't been to a gig in a while, so in true OCD all-or-nothing styleee, I went to see Kula Shaker and then Underworld the next day, as I'm friends with the people doing the shows and they use XTA gear.

It was good to catch up with some people I hadn't seen for a while and we all ate out at a superb Thai restaurant in Wolverhampton called 'Made in Thai' - Highly recommended if you're in the area! 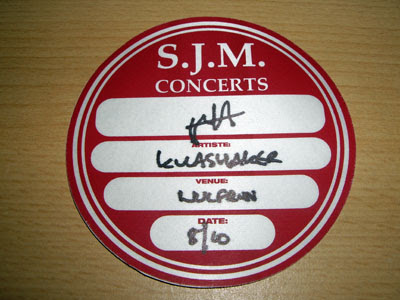 Access-All-Area Kula Shaker pass!
I saw Kula Shaker many years ago, when they first became big, and I thought they were just as good this time round. 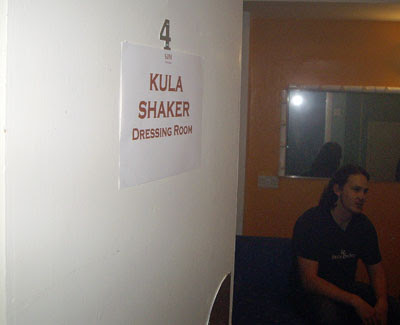 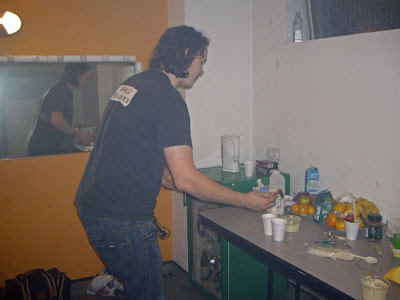 As you'd expect, there were class A drugs and loose women everywhere as you can see :0)
Cups of tea, a can of warm Guinness and many Doritos were actually consumed instead, courtesy of the band, which makes it taste nicer.
Nice tea-bagging action there Jamie; knees bent, back straight, no drips! 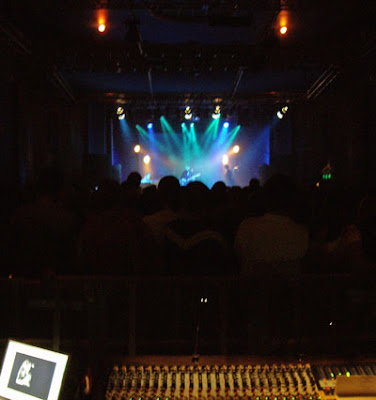 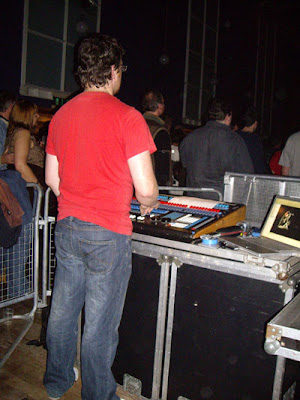 Me old mucker Mike on lights and video.

Next up, Underworld in Birmingham... 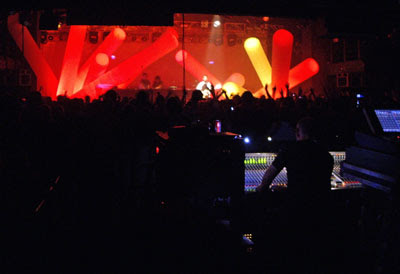 I've seen Underworld many times and one of my most memorable gigs was seeing them in Manchester years ago, although I hadn't seen those fab inflatable light-tubes used before. 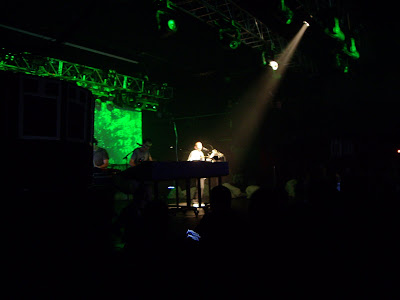 Frontman Karl Hyde is actually a resident lad from Bewdley and you'll often see his mum attending their local gigs and a guy I work with dates his niece!
Whoops, I've just blown their coolness factor haven't I? :] 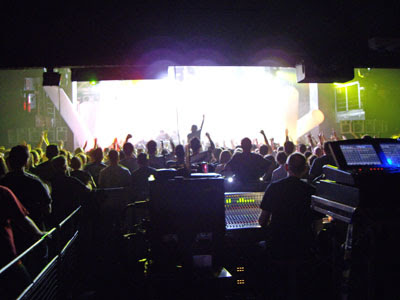 My friend John at the helm, while they do their most well known track 'Born Slippy', used in the film 'Trainspotting'.
That got the crowd going somewhat!


Today, I'm Most Angry About: Discovering my old steel bath is worth only £3 to the local scrap merchants, who's advert reads: 'Scrap Metal Collected for Free - Top Prices Paid!' :[
Grrr-O-Meter Rating: 0.5/10