Last week I went on a 'Learn to board in a Day' course at the Snowdome.
Apparently "The UK's premier real snow centre"!

Much to my surprise, I was actually snowboarding at the end of the day... gingerly... but snowboarding.

I go skiing every year, but I've finally had enough of having four things to worry about and having to wear ski boots that can only be described as torturous.
Snowboarding, although considered 'the dark side' by skiers, is a lot nicer and the boots are just big comfy boots :] 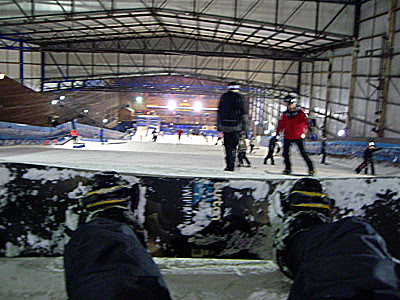 Is that a plank of wood strapped to your feet Phil... Hmm... Yes it is!


Tomorrow morning I fly out to Lapland to continue my snowboarding and embark upon many other exciting adventures.

Today, I'm Most Angry About: Teenagers who feel it's obligatory to shout things at cyclists!
Grrr-O-Meter Rating: 7/10

Today's Top Tip: Dog owners: Never lose your TV remote control again. Simply Sellotape it to the back of your hound, and hey presto... Whistle and the device is at your beck and call!
Scrawled by Phil 15 comments: Links to this post

After much deliberation, and a gentle nudge from an 18 month headache, I've decided to take a career break and resign from my job at XTA as Research & Development Engineer 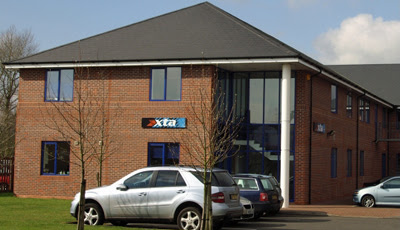 I've been at XTA right from the very beginning; a grand total of 15 years.
I saw the company start in a friend's spare bedroom and then grow to become a world class leader in audio processors.

An amazing success story and I'm proud to of been part of it, but as with everything in life, nothing can last forever.
I'm not burning any bridges, but I feel it's time to move on to new adventures and break the 9 'til 5 lifestyle. 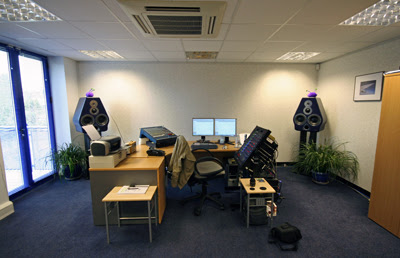 My fantastic office at XTA

I've learned so much in my time at XTA and have gathered countless fond memories and made so many friends - I wouldn't change a thing!

I'm now enjoying some extended time off and spending quality time with my NBF... 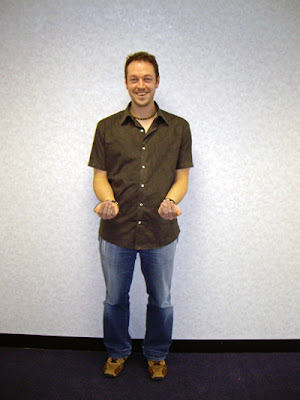 My picture was taken on my last day and I was asked to pose like this!
Why..? See the news story on the XTA website HERE :0]

Also see the 'subtle' editing on the XTA contacts page 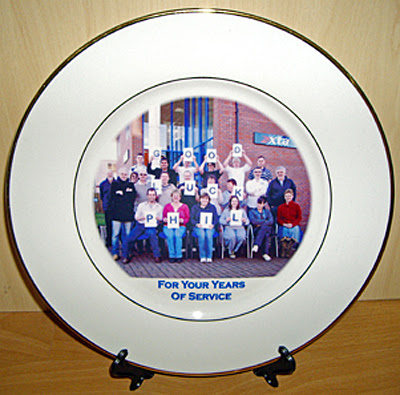 ...and they were not lying.
I did indeed receive a commemorative plate!
A superb tongue-in-cheek leaving gift :0) 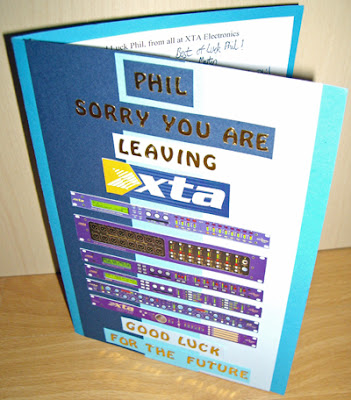 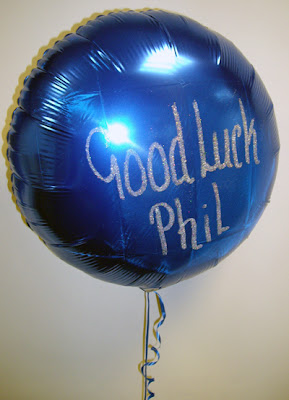 I even got a helium balloon that I ceremoniously released.

BUT best of all, and much to my surprise, my real leaving present was an iPod Touch! 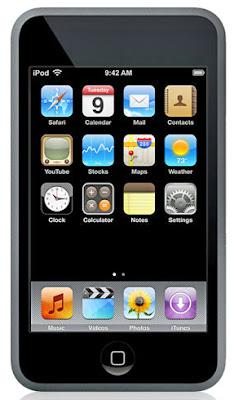 If you've not seen an iPod Touch in action, check out this short clip *drool*

Today, I'm Most Angry About: My body breaking out in red blotches, from head to toe, after eating shellfish*
[* Next time I'll be more considerate - BOOM BOOM 'ahem' sorry]
Grrr-O-Meter Rating: 6.7/10

Today's Top Tip: Deaf people: Wearing oven gloves outdoors is an ideal way to stop strangers from eavesdropping on your conversation.
Scrawled by Phil 41 comments: Links to this post

Recent snow flurries appeared to hit everywhere in England, apart from where I live :'[
So if the snow won't come to me, then I go to it!
This time, a jaunt up Bredon Hill. 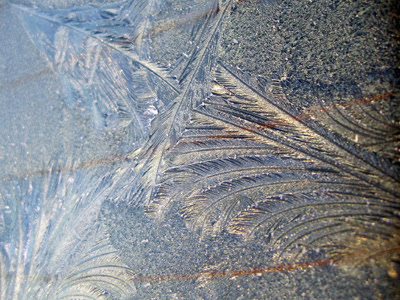 I managed to capture this elegant ice-feather formation, on the rear windscreen of my car, before the sun melted it. 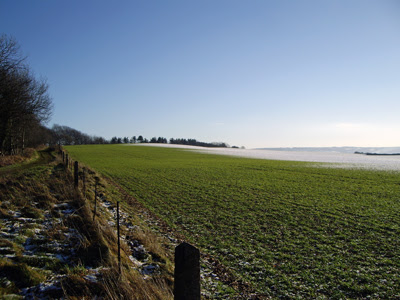 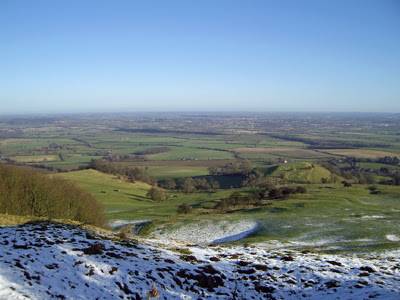 View over Evesham from the snowline. 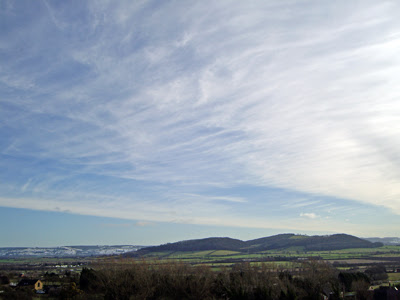 A band of cirrus clouds. 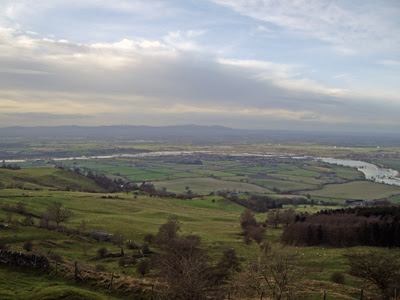 The River Avon in flood. 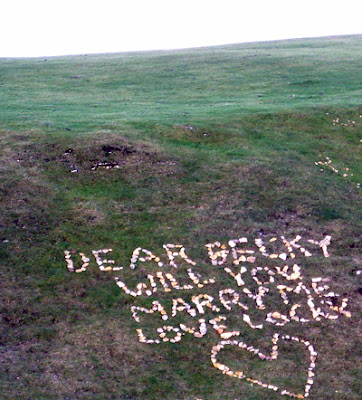 At the top of Bredon hill, I spotted a rather unique marriage proposal.
I wonder if the inevitable divorce will be announced in such style? ;0] 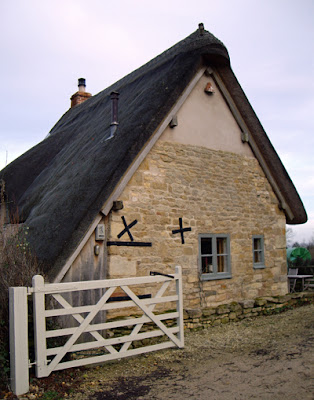 I loved a thatched roof! 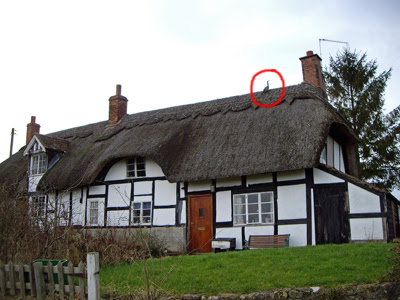 ...another thatched roof with an ornamental / deterrent 'thing' on it. 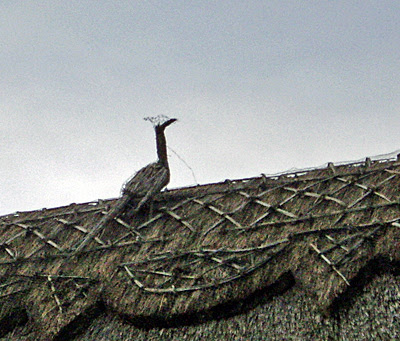 What the heck is that supposed to be?
An Eoraptor dinosaur perhaps?

Today, I'm Most Angry About: A friend drawing a 'willy' on my arm, in blue Biro, while I was on the phone. Not too much of a crime, but I completely forgot about it and went to the pub.
Midst ordering a round of drinks, I realised I'm leaning on the bar sporting my new temporary phallus tattoo! GRRR
Grrr-O-Meter Rating: 0.7/10

Today's Top Tip: Homeowners: Make the normally mundane task of switching the central heating on a little more exciting by singing "The heating's on" to the tune of the 80s hit 'The Heat Is On' by Glenn Frey, as you are doing it!