Well, much to my surprise, I actually got a response back from my rant on the McDonalds website, regardless of it being bruttaly honest and I didn't even proof read it, so I really didn't expect a reply, but check this out: 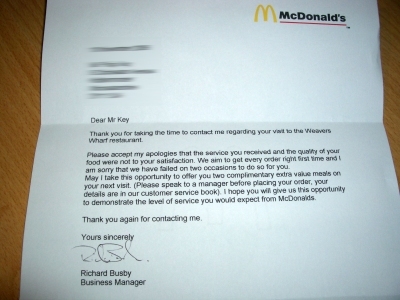 Woot, two free meals at the "The Golden M" ... Greeeeaaaaattttt :{} Anyone want them? 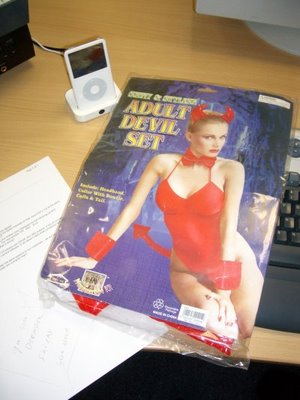 In response to my distress of being invited to a fancy dress party themed 'Festive Fairies', my friend and colleague, Big Rich, leaves this on my desk for me...
A complete female devil outfit, minus the leotard luckily; I could see my meat and two veg making unwanted appearances in that little number! :0)
So, it would be rude not too... an 'Evil Festive Fairy' it is, I just need a red fairy dress off the intermaweb to squeeze in to and I'm done... Sorted :]

Two things have happened to me in the past couple days that I would say constitute being picked on:

1. At work, I pop into The Silver Fox's office to say hi, and he offers me a white chocolate chip cookie, to which I politely decline, but he decides to try and force feed me the biscuit regardless. Firstly he pushes the biscuit against my hands covering my mouth; failing on that he tickles me, causing me to drop my guard and laugh, upon where he takes the opportunity to stuff the whole biscuit into my mouth! Grrr, it was nice though... The cookie that is, not the torture.

2. I pop to my big sis's house, and unknowingly to me, she acts out a predetermined sketch where my she takes an egg out of the fridge and gives it my bro in law, saying it's out of date and to put it in the bin.
My bro in law then smashes it over my head, much to my surprise!
I duck and cringe, waiting for the run of yolk and albumen, but it doesn't happen!
It turns out they had made two small holes in the egg and blown the centre out the night before, so it was just an empty shell! Grrr... far too convincing and it's the second time they have got me with that old trick.

Today, I'm Most Angry About: Going to the dentist for a check up and hygienist appointment, but they told me they had messed up and I wasn't booked in to see the dentist at all! Grrr, I had booked three months ago too! :[
Grrr-O-Meter Rating: 2/10

Today's Top Tip: Cheer loudly at 8.00pm next Saturday to fool the neighbours into thinking you have won the Lottery!

I assume you will be posting a photo of yourself in your little red number. When is the fancy dress party?

You know that on the third time, you're going to be all casual about the egg, and it _isn't_ going to be blown :)

Sorry about the deletion, that was me!

HA! McHurl's should have given you 2 free meals at another restaurant!
They obviously want to tortue you again
;-)

Your meat and 2 veg?? haha
You tickle me with your funny expressions. I've heard "twig and berries", "nuts and bolt", of course, "the family jewels"
You'll make a red hot devil!

My nephew has tricked me with the hollow egg too.
It was funny only after I realized I didn't have runny sunshine all over my head!

that is a neat egg trick. although i picture u a fairy *not*

Kat:
You assume correctly :]
The party is in the first week of December!

Stu:
LOL, yeah! I'll stand there really causual saying, "go on then" and the egg WILL be real :[]

Kayla:
Ah, yes another good expression :0)
So, you've been caught with egg too, good!

You are seriously in trouble with McDonalds (they have written your name for crissakes!). Your boss appears to have made a pass at you. Your sister and brother-in-law are clearly insane. And you want to dress up as a fairy? Whoa!

Hutters:
LOL, it does all sound a little loony when you put it like that!
(The Silver Fox isn't my boss, by the way, he's my bitch :0)

Sarah:
Glad the golden M is still having a effect :]

For future reference, if tickling doesn't do it he'll pinch your nose so you can't breath. I know about these things ;)

And he's MY bitch xx

Celeste:
Yes, calculating is it not! :)
[I like the new piccy]

I was gonna say what Stu said. Tell them to film the event and put it on youtube next time.


I guess them approaching you with a video camera might be a giveaway though...

haha they got u wiv that 1!! lol. i didnt know it woz planed though so i was surprised aswell hehe

ahaha u crack me up! can't wait to hear about this party! everybody seems to be taking the piss outta u.. you must really be able to take a joke or something! funny though

Rob:
Hello and welcome Rob!
It would make a good YouTube entry, but would have to be secretly filmed yes.
I hope my sis and bro in law don't see this, as it will happen :)

Lindzy:
There are many other people I know going to the party, most of which are chickening out of dressing up. I'm playing my face about dressing up a bit, so I'm only getting what I deserve LOL. It should be a good laugh and yeah, I can take a joke 'til the cows come home. :] Moo

Glad to be here thanks!

Welcome to my blogroll :)

yeah, that's being picked on. some youth may call it bullying.

did they say, "gotcha, bitch!"? because if they did, it necessitates vengeance.