Four of us electric bike aficionados (including one of Pink Floyd, almost*) took to the roads of Wales and cycled out to the coast with two full batteries each and very little else. 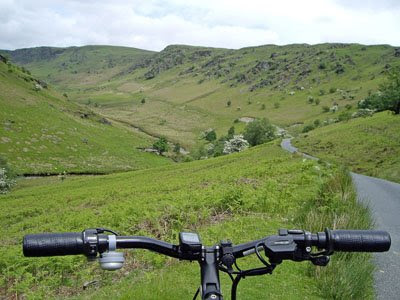 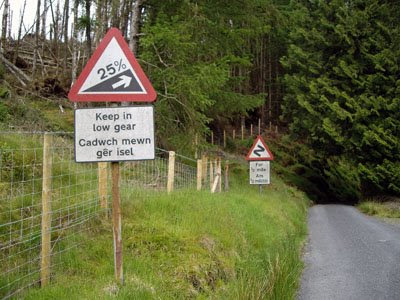 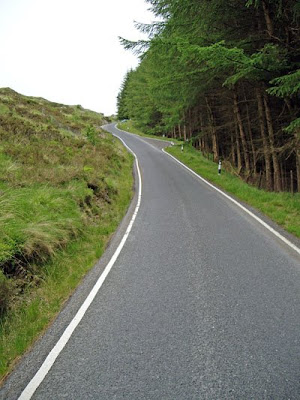 One of the most unforgiving hills I've ever seen, but the descent down the other side was much more fun, although my disk breaks got so hot they actually started to warp and distort! Scary :[] 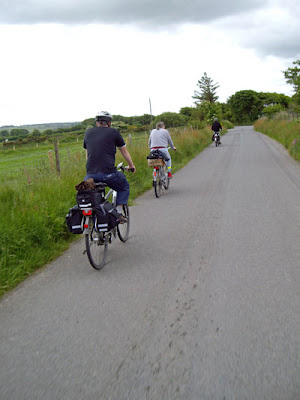 After the pass and hills, the country roads were just great 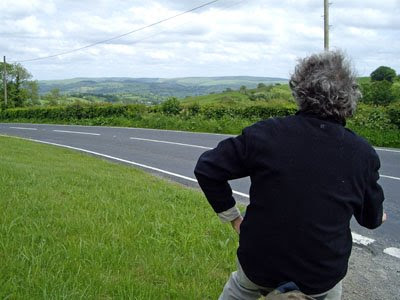 Pondering over directions.
We had many a direction dispute :0) 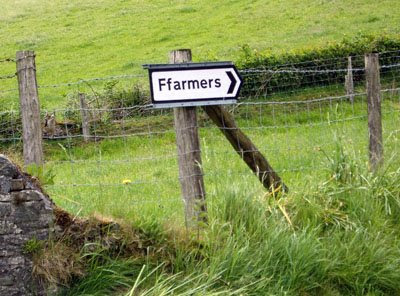 We passed many entertaining place names too like Ffffffffffffarmers 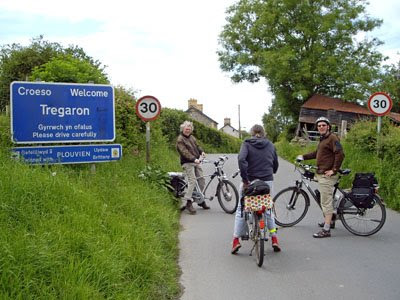 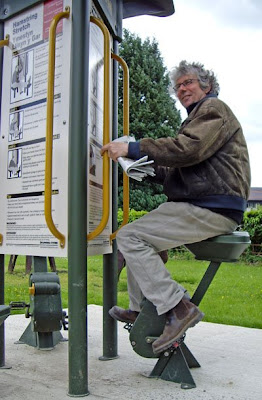 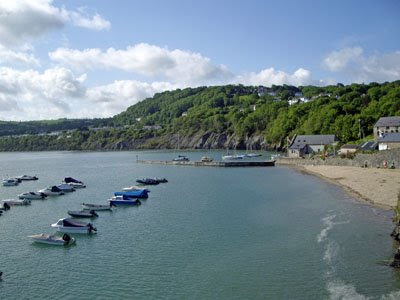 After 45 miles we finally reached the coast - New Quay. 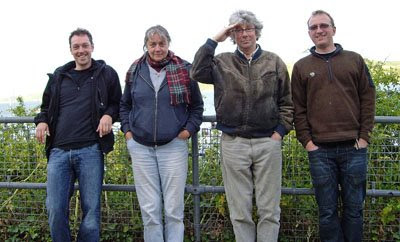 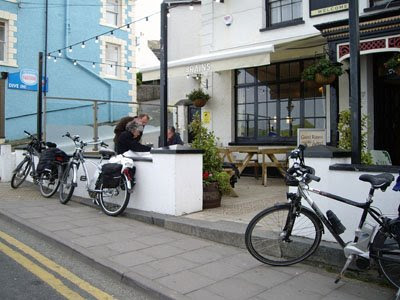 We pulled up outside the first pub we came across.
It was like the Hell's Angels had arrived in town, except our bikes don't roar, they only quietly hum :] 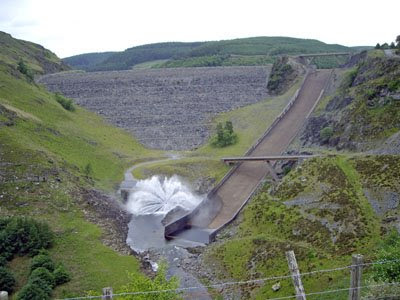 On the way back we stumbled upon a rather impressive dam 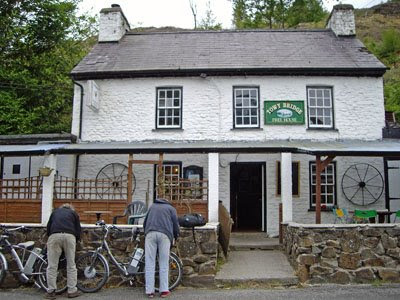 The second most remote pub I've ever visited.
No one believed the 'Public House' logo on the map, but there it was AND it was open. 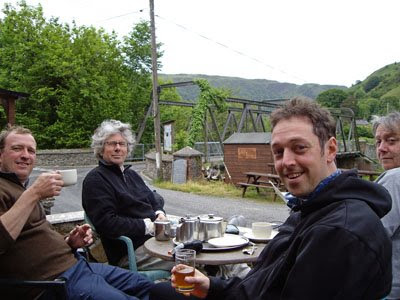 It would have been rude not to!
A swift half for me and tea for the others. 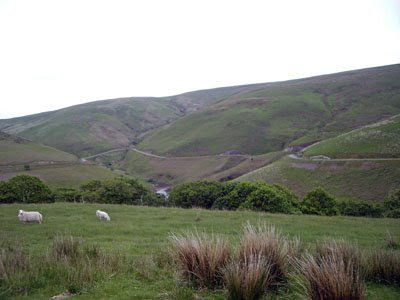 The final leg of the tour - one amazing, long and twisty downhill.
No batteries needed for this one.

After completing the 55 mile return journey home, we were all ready for a sit down, a drink and some good food.

[*Nicola is the cousin of one of Pink Floyd]


Today, I'm Most Angry About: Only getting 4 hours sleep, as I didn't fall asleep until 1am and then my darling of a neighbour woke me at 5:05am with his big bore exhaust! GRRRzzz

Top Tip: Save electricity by shortening the cables to all your household electrical appliances.
Also, never leave an empty socket switched on; you'll leak precious electricity into the air, costing a small fortune over time!
Scrawled by Phil

I'd love to visit that random middle-of-nowhere pub!
How great is the scenery, all nice and green.

Rebecca:
The pub's not much to right home about, and I have no idea how it keeps running, but it's a welcome site for sure! :]
It's so wet over nowadays, everywhere is very luch and green indeed.

I was thinking more along the lines of "I've been to a random pub in the middle of nowhere!" claim to fame hehe.

Rebecca:
Haha - yes, you certainly could award yourself that! :]

Kat:
Alright, no need to say it twice LOL... I know; we couldn't be further from Hell's Angels alikes :)

Those bikes really are quite nifty :O) Now that I've seen all the photos of you getting some excercise, I think I'll just skip the elliptical trainer tonight and go right to sleep! haha No, It doesn't work that way does it? Damn!

Speaking of pubs...have you ever tried wheat beer???

THIS IS SO COOL!!! Oh I bet you had a BLAST!!! Thanks for sharing another wonderful adventure!! Look forward to the next one! Any thought on where???

Linda:
Yeah we did, but we stopped over night in New Quay and cycled back the next day after much boozing :]

Mel:
Haha, imagine that if you could watch excercise and burn calories. Now that would be nifty!!!
Yeah, I've tried wheat beer - They sell it in some pubs and you can buy it in bottles at most places. I quite like it :]

Crystal:
It was a nice little adventure yeah... something different :]
I've got a few adventures still to post, but the next... you'll have to wait and see :0)

You did well considering your cheating electric bikes (with which I totally agree). I may have walked to that pub when I was a teenager, to buy fags when parents were staying up in the hills, probably about 15 miles away.
I double taked on one of those group photos. I would appear to bear some resemblance to you in particular lights

Hutters:
Hahaha, what a brill stoty you walking to that pub for fags :]

Fabulous trip again Mr D!! It would have been fun to get pissed - do drink rules apply to electric bikes? (was that a novel by Philip K Dick?)

Mutley:
I'm not sure about drink riding rules, but I do it :[]
..and yes, it was once a novel, but removed from print due to it being too controversial - LOL

The Licensing Act 1872 makes it an offence to be drunk in charge of a bicycle (or any other vehicle or carriage) on a highway or in a public place. It's probably illegal to ride a goat home whilst intoxicated too.

Max:
Well I never knew that, you boffin :]

I love reading about your adventures Phil. Wales on an electric bike? Superb!!! Where will our hero be going next :o)
Which Pink Floyd member is Nicola related to?

Fiona:
Glad you're enjoying the old blog!
I'll be off here, there and everywhere as normal :]

I think Nicola is related to the drummer.
I once met and went to Roger Waters' house for the day!