Today, a friend bluetoothed me this photo he had taken on the weekend.
I couldn't believe my eyes, as it does perhaps derogate away from what one would expect to see outside a shop selling newspapers, surely! 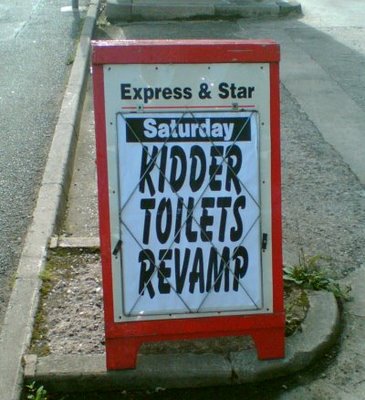 Me being a bit of such choleric disposition, it wound me up slightly to see a newspaper actually trying to lure local Kidderminster people in to a shop using such gripping headlines as this.
With all that is going on in the world and locally, the relevance of some Kidderminster public toilets being done up, is neither here nor there. What on earth does this say about the local people's mentality and ones who buy the Express and Star newspaper?


Today, I'm Most Angry About: Having to clean dog shit off my one-week-old new shoes for the SECOND time this week!!! Grrr... bloody irresponsible dog owners... Grrr
Grrr-O-Meter Rating: 7/10
Scrawled by Phil

News headlines of our time:

*Man in hat sensation!
*Earth in orbit of sun shock!
*Boy with balloon on stick causes havoc in town centre!

I agree about the dog owners though.

We should have the irresponsible dog owners teach their dog to use the newly vamped Kidderminster toilets!
Raise lid please!
;-)

dog poop is the worst ..once its looks clean the smell likes to hang about longer!

Max:
Ooh, there some on-par headliners there max!

I always clear up after my dogs when they poop in public places. Really pees me off when others don't.

Did someone say new shoes?

Kees:
Yeah, me, I did... Wanna make something of it or what?

Well, I would have been interested in reading about revamped toilets, stylish toilets are very important you know….too bad, you haven’t got the whole story here :)
Just kidding!! Maybe they shouldn’t revamp the toilets but install dog toilets instead! Not that that would make interesting headline news though ;)

Oh and btw….why haven’t we seen a picture of these new shoes? ;)

Well, I would have been interested in reading about revamped toilets, stylish toilets are very important you know….too bad, you haven’t got the whole story here :)
Just kidding!! Maybe they shouldn’t revamp the toilets but install dog toilets instead! Not that that would make interesting headline news though ;)

Oh and btw….why haven’t we seen a picture of these new shoes? ;)

In the meantime perhaps you should watch where you're walking, DoGGa! ;) :D

Like Aoj, we have pocketfuls of bags so the dogs leave no mess.

The only thing worse than cleaning dogshit off your shoe, is cleaning it from between your toes. That happened to me when I was about 8 years old, I can still feel it.
ewwwwwww

Dakota:
Ah, now dog toilets DOES make for an intersting headline, in my books!
That would just scrape through I reckon :]

They're not really shoes, just day to day footwear, I'll post them on the weekend...

Oh how I have missed you my dear DoGGa!

Hello there Dogga!
Hope you are having a nice weekend.
:0)

Well, atleast it isn't the usual -- 20 people were blown up today in a Baghdad market by a car bomb.

No news, is good news, methinks!

Sarah:
Ah, welcome back Sarah. Hope you had a nice break and I'm sorry about the dog doo doo too! :[

Kayla:
I had a very nice weekend thanks Kayla. I trust you did too?

We had "Fireman in Pig Slurry Horror" once, which was nice.
Public toilets do carry great public concern. If we, at the Council I work for, try to close any, the shit hits the fan, as it were.