A bit of a random post folks, but it clears a few things up:


F1 = Fancy Dress: A few weeks ago, I posted a You Tube video of a Devo song and Sarah came up with the idea of me dressing like a member of Devo from the video... So, HERE it is Sarah... 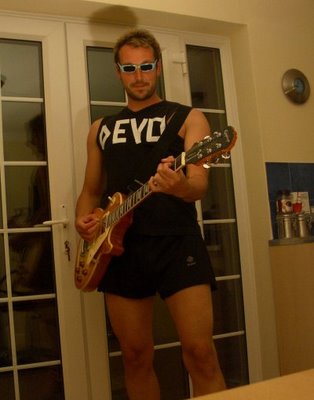 The best I could do with a gym kit, electricians tape, a pair of kids sunglasses and my guitar
10 house points to anyone who can tell me what chord I'm playing?

F2 = Flicks: This weekend was a bit of a cinema frenzy.
On Friday night, a friend and I went to see the Dirty Sanchez Movie. Oh dear, oh dear, when bunch of Welsh guys travel the world coming up with Jack Ass style stuff, but far cruder (and better in my humble opinion) AND then make a movie of it, I just had to go see it and boy did I laugh... a lot!!! We were grossed out a few times too though. :[] 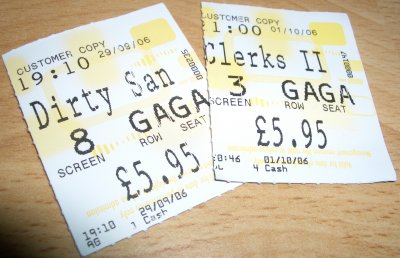 On Sunday night, I went to see Clerks II and I was not disappointed.
Firstly, me and a friend had the entire cinema to ourselves, as it was a last showing and about to end it's cinema run anyhow.
So off with the shoes, feet on the chairs, bodily functions functioning without due care and attention for other viewers and hour and forty of laughing was enjoyed.

It was a bit like the first movie, but it's best not to try and be that clever and arty again, so they went for a more main stream style and it worked. It was just as funny and a little deeper this time round too!

F3 = Footwear: Kees and Dakota asked about my new shoes, although they are not really shoes, nor trainers, definitely not pumps, so what are they? I dunno - I call them hooves, as I do with all my feet coverings.

They are a lovely new pair of Cats that I purchased from Stourport's factory seconds shop for £28. I just can't resist a bargain, but I had no idea they had built in dog shit magnets...
Darn, that's why they were going so cheap! 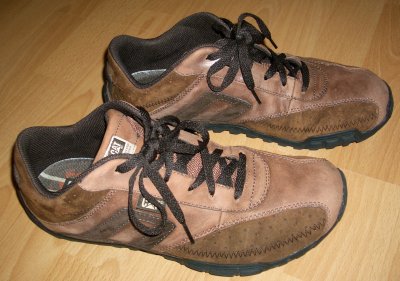 Today, I'm Most Angry About: People using their mobile phones while driving. Grrr..
A guy in front of me, on the way home from work today, failed to notice a set of traffic lights turn to green, because he was so distracted by his phone conversation.
I gave him a courteous few seconds, but then blasted my horn, holding it on long enough to make even me feel a little uncomfortable, but it achieved maximum humiliation effect for him. :] He dropped his phone, put the car in gear and kangarooed off, much to my delight!
Grrr-O-Meter Rating: 7/10

Fourth F = Fine Devo Dogga!
Well made outfit with the items you had on hand

I read about that Dirty Sanchez movie..pretty raunchy stuff, eh?
haha
I guess you are not bothered by the sight of blood

Fine pair of hooves you have there.
Oooh, I love a bargain too.
Love to shop the outlet malls for clothes and crystalware.

I laughed loudly regarding your daily Grrrr moment!
Nothing satisfies like the long, loud blow of the horn when pissed off ;-)
"kangarooed off" haha
I'm stealing that expression, just so you know!

Whahahahaha LOL! Ehmm… sorry about that! I really like the DEVO gear! :) I don’t know which chord you are playing there, it’s probably some D(oGGa) major thing ;)

Lovely hooves you’ve got there, they look very comfy. I didn’t know Cat made slippers too ;)

Funny Grrr moment! Thanks for making me laugh :)

Well from here it almost looks like G Maj... So what is it?

You are fucking awesome!

You are the best blog friend ever!

Blowing the horn in good yeah, fnar, fnar.
Kangarooed off is an ace expression, yes. Normally happens in a manual car you are not used to driving.

Celeste:
Horn blastin' rules when people are in the wrong!
Glad you like the outfit ;)

Dakota:
Cool - You like the outfit!
the chord of D(ogga)... Hahaha, clever, like it, but no sorry... you haven't won this time.
Yeah, the hooves are great! V comfy.

Okay...another expression...
"fnar"? What is that?

Ah, yes, I shouldn't have used that... Mmm, maybe I should do English expression of the week on Fridays? :]

English expression of the week Fridays would be great!
I love learning about your expressions. A cultural lesson :-)

That comic strip is hilarious.
Now I see why you said fnar to my "blowing the horn" hahaha

Bowling shoes?
And dreasing up as Devo. Strewth

those shoes are super:) and they have built in dog shit magnets! what more can u ask for?

Nice hooves you've got there. Almost as much of a bargain as my boots but not quite. I win. xx

Hutters:
Bowling shoes, LOL! I know some people who actually wear scratty trainers to go 10-pin bowling in and then walk out with the bowling shoes still on!

Drat, I was going to say G also. That's what I get for not visiting often enough. Nice axe by the way.
I loathe the talk on the mobile phone while not paying attention to the road too.
I wonder if she was calling her insurance company to tell them she was about to have an accident.

Phil:
Yeah, that comment was actually aimed at you, but 'lil Sarah got in there first suprisingly! :]

Nice axe, is it an Epiphone?