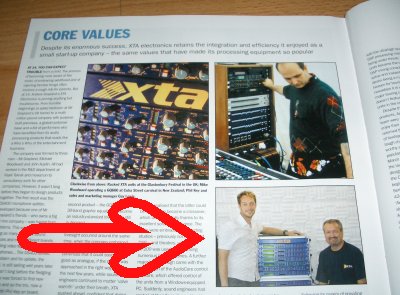 It's not the first time I've had my mugshot in an audio industry magazine, but it's been a while.
The company I work for had a sort of overview and history written about it, but I look half asleep in the picture (which I was) and a bit camp too, so I'm keeping the picture small. :]
I'm stood next to our International Sales and Marketing manager Guy.

Going off on a complete tangent here: On the weekend I received this odd text message from a friend and all I can say is, I'm glad he was restricted to 160 characters:
"Alright spudhead? Out for a pint of potato juice tonight? Usual time? Bondage gear? A small goats hoof? Random jigsaw pieces?"

Luckily I never say any of the items mentioned above! :]


Today, I'm Most Angry About: People using their mobile phones while driving... AGAIN! Grrr
OK, leaving work today, I'm sat in the usual traffic jam going onto a small island outside work. A woman halfway round the island stops and lets the car out in front of me - fair enough.
I then pull up to the island and wait for this woman to go past, but she doesn't, she stays right where she is, so I give her a few courteous seconds and then pull out too, assuming she is also letting me out.
Then, after a while, I notice her suddenly pull right up to my car (within inches) and I have no idea what she is doing so close, but this were I notice she is on her mobile phone, and presumably she was so engrossed in her conversation she didn't pull forward, thus unintentionally letting me out when she didn't want to and now wants to rectify her mistake.
My theory was then proved, as when the car in front started to move, she floors it and pulls up right across the front of my car blocking me in on the island itself, STILL ON HER BLOODY MOBILE PHONE!!!
Unbelievable... my blood instantly boiled... so I gave her the infamous Dogga lengthy horn blast, which pleasingly resulted in her putting down her phone immediately. Grrr, stupid cow!!!
Grrr-O-Meter Rating: 7.5/10
Scrawled by Phil

Oooooohhh I do love me a blank comments page.

OLD NEWS. You've been sat in my bathroom for weeks and I think you may have already been recycled. Camp you say? Maybe I'll see if I can dig you out and have a proper look :) xx

double grrrrrrrrr... id be pissed too people and thier damn cell phones!!!!!why aren't people courteuos i just dont get it..when did mankind become so evil and mean?

Kees:
How very dare you scrawl on my nice new comments section :]

Lindzy:
People aren't very nice to one another a lot of the time.
Like this morning, I was trying to pull out of my road and people kept on pulling up really fast to the car in front stopping me from pulling out... One after the other until a nice person let me out and then I passed them all at an island a few hundred yards down the road, so it didnt speed up their journey any! Grrr IDIOTS

with a digital camera kept handy in the car you could capture the crime in progress, you would need the car and the number plate.

Although it would proberly result in the police not being bothered.
And then some yob joy riding whilst on the phone would crash in to the back of your car and nick your camera.

Can I have your autograph Dogga?
hehe
That's cool! Wish the photo was bigger so I could see you better.

You go Dogga!
Make those idiots drop their cell phones ;-)

I am incredibly irritated with people driving and chatting on the phone at the same time! Why don't they just ban it???

btw... should have said something before good job making it into the press! lookin good!

Had Guy fallen down a hole? Were you standing on a box?

Sarah:
oh, now that would just cause me a heart attack if they did that. Us English have a little bit of decorum left... I think :o)

Max:
Yup, you are so right! Or I would get spotted using a camera while in my car and I would be the one who gets done for driving without due care and attention, any money.

Kayla:
Yes you can... Here it is DoGGa
I will blast my horn at all idiots who cross my path! :]

Yoda:
They should just ban it completely, a small on the spot is not enough in England.

Jan:
LOL, Ah yes, we should have filled that in before taking the photo I guess :0)

I think drivers on phones would probably rate about a ten for me. Right before my heart attack brought on by stress.

I've never been in the paper for anything real good, only medical stuff (lucky me)
I was once part of a group of unidentified youths though. I'm not sure that counts

You would have a heart attack? Personally, I would follow them and scare them into having a heart attack if they flipped me off for something THEY were doing.

Trust me, I would.

The best people to scare are soccer moms, with their minivans or big SUVS who think they rule the world.

Ok, let me just say that I am crazy today. I took some Mucinex for my cold and it's made me hyper and out of my mind.

How long could I possibly make this comment? I could go on forever!

Oh, and Lindzy rocks. She helped me get music on my blog. Awesome.

Phil:
Now being part of unidentified youths is way too cool! Go Phil LOL :]
Presumably this was a while ago, or are ya still hangin' wiv da kidz?

Sarah:
Ooh, you're showing a slight psycho trait there and I like it!

Mmm, can I have some Mucinex?

Woot Woot. You're in the paper...that's awesomeness...and for good reasons.

Do you get text junk? I do. They're enticing sometimes...then alas, i find out they're junk.

Meeja Tart!
Why cant these fools get it into their heads that it is Against The Law, and if it wasn't it would still be careless driving. When M got hit (twice!) by a person using a mobile while trying to manoeuvre, that person then tried to wriggle out of paying up. Just shows what sort of bastards they are!

Guggen:
Junk anything annoys the crap out of me too! :]

It was a while ago,
now I am part of a group of
unidentified adults
:-)

I am not crazy anymore.

Phil:
I thougt so

Kayla:
Hi ya, not going too badly I guess at the moment thanks.
I trust you are OK!

u have kinky friends :) xoxo

I bet if that lady knew you were an audio industry mag celebrity she definitely would have let you in ;)

Well i dont actually drive but i have 26 years exp. as a passenger and let me tell you...it is very eyeopening to see just how STUPID some people just naturally are.Commen sense seems to be a thing of the past sometimes.

Where oh where is my DoGGa?
I hope all is well with you

I haven't heard from you!

Yo Dogga! Come talk to us!

Celeste:
Hahaha, yeah I bet! "Did you know I'm in an Asian audio industry magazine this month love?" I can see it now :]

Bailey's Mom:
Hello and welcome! Yup, common sense and a majority of road users is not that common :#