I love the theatre and if you've never been to see a play before, then go do it luvvies!

You can't beat actually being there with the actors and actresses - It's a completely different experience to seeing a movie and so much more personal and enthralling, especially at a smaller venue where you're right up close to the stage.

This Friday night I went to see a play at my local theatre called 'Snake in the Grass', which was basically a murder mystery, but with an eerie twist!
I haven't been to my home town's theatre for a while now and was pleasantly surprised to see such an entertaining play performed by amateurs on a small static stage with very few props, costume changes or effects.
The whole play was performed by three women, pictured in the link, and it just goes to show, you don't need big expensive special effects or big name actors etc to be very entertained for an hour and a half. 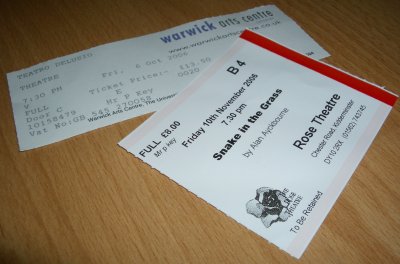 A few weeks ago, I went to see 'Teatro Delusio', which is a play done in a very different style to anything I've seen before, mainly because it had NO dialogue in it at all!!!
I was rather amazed to see how the actors conveyed a whole range of emotions, purely with body language, as they never spoke a word and they all wore masks, which were set in a fixed way - They acted so well, it was like the latex masks actually moved to show the emotion, but it was just an optical illusion.
A real eye-opener and not something I would normally go and see, but I'm so glad I did on hindsight.
So, when was the last time you visited the theatre and what did you see folks?
Today, I'm Most Angry About: Having a weak bladder day. Normally I have 'bladder of a horse', but today, I've been up and down my stairs countless numbers of times! Grrr
Grrr-O-Meter Rating: 1/10

Today's Top Tip: Girls - Next time you feel like throwing a ball over-arm, don't, because you can't and it just looks silly. Just throw it under-arm style, and no one will laugh at you or get hurt! :0) *Dogga cowers and prepares for outraged female onslaught*
Scrawled by Phil

Wow, DoGGa, you have a LOT of balls for saying that about the over-hand throw. I am going to assume here, that you have been with someone in the past few days that simply CANNOT handle an over-hand throw. You apparently have never met me nor seen my throwing style. That is what happens when I grow up with three males, me being the only female.

Remind me to slug you in the arm when I meet you in London someday in the future ;).

Last August I went to see The Phantom of the Opera.

You can't beat actually being there with the actors and actresses.

Dude, I don't know about you but when I go to the theater I'm clearly separated by an invisible but highly-enforced line.

I once went beyond that line. Hell, that comfy chair on stage wasn't being used, and it looked so much more comfortable than the hard seat I was in. I wasn't really interfering with the actors, sitting there on the side.

I can't believe how angry the guards got!

i've not been to the theatre in eons.

I went to the theatre last month to see a small play in the studio rather than the main theatre. Unfortunately, the artist instructed the theatre to shut the doors dead on eight. We were 4 minutes late - I didn't get to see it.

I can sympathise with the bladder (I have IBS, it is grate)
Women throwing overarm usually means I get hit on the back of the head by the ball, stick etc. I blame early socialisation for this.
And I think you mean "dialogue", my dear.
M's family are Thespians, so we get to see (bloody) musicals quite often. (Apparently Thespians get into the country more easily now, due to the expansion of the EU)

I saw a local university production of "Bye Bye Birdie"
last year.
A musical set in the 1950's about a group of high school kids who go crazy over a rock star

And I'm going to body slam you by throwing you over-arm!
haha

girls r soooooooooo much better than boys, even if we do throw differently!! lol.

You sexist pig;-) How very dare you point something so obvious out!
Last time I went to theatre took an ex as present! Went to see some crappy opera - they was all singing in foreign!?!? Cant remember name but she enjoyed it apart from my fidgeting! liked the thank you MUCH better :-o!! I was singin then!

I go the theatre all the time, usually to see stand-up comedy but I like to watch a play from time to time too :)

Sarah:
I knew that tip would get me into trouble :0) But you would be the first girl I knew who could actually throw!
*Dogga reserves a patch on his arm for Sarah* :]

Guggen:
Ah, the old Phantom of the Opera, a classic I have not yet seen!

Dan:
Hello and welcome Dan. I was in the audience too; I meant you see the actors and actresses in real life rather than on a 2D screen.
LOL, I bet you were thrown off quicker than you could "exit stage right" :]

Boo:
You should give it another go, for the hell of it!
Bladder performing as normal today, by the way :]

Kat:
Oh, that's a shame. It would of been really cool as well in such a small area! Oh well, better luck next time :]

Hutters:
I have bowel troubles too! It's not good yeah.
LOL, I've never actually been hit, I don't think.
DOH... Grrr... Dialogue it should have been, well spotted. Whoops!
LOL, Mary Poppins is the closest I'll get to a musical, unlucky :]

Kayla:
That sounds a fun play - Hope you enjoyed!
Would you consider throwing me under-arm instead? :0)

Niece:
You certainly do throw 'differently' me dear! In fact I want to see next time I see you lOL :]

Shteve:
Hahaha, how woooooooooooooood!
I can't really picture you at an opera somehow :}

Dakota:
Brill, I haven't seen stand-up comedy myself for a while now :[]

Hey! I can totally throw a ball over-hand!!

I love live Theatre too, if its good. If its bad, well then its just painful.

Celeste:
Wow, another lady thrower, maybe I've been proved wrong! :0)
Live theatre is superb, but I'm yet to see a bad play :[

You'll get no arguement from me I can't throw to save my life. I can fling, but that's different.

Last play I went to see was 'Art' with Jamie Theakston. It was great. And I went to an opera in Vienna which was BEAUTIFUL. I like a good trip to the theatre but I tend to get hot, bothered and fidgety. Generally quite bad at sitting still. Ask Mr Fox about the Beth Orton encore incident. Truly shameful.

That one with the masks looks great, the masks aren't how I thought they'd be, I like them. That looks like a play worth making the effort to sit still through xx

Jamie Theakston in a play! OK
An opera in Vienna, wow, that sounds like an experience.
I shall probe your other half for the Beth Orton story when he returns from the fatherland.

whoa now!! a lot of balls I agree with u sarah! i played second base and center and can throw...lol...

The play you went to sounds pretty cool and now I feel really in the moood to go to a show myself. I would love to go to the Theatre but haven't done it at all. I really want to go over to Vancouver for Cirque de solei(bad spelling) ...The last play I saw...hmm.. prob when in Mexico they had live shows every night at the resort we stayed at in Bucerios..I loved it and the actors were all so talented.

Very brave about the throwing thing,Hope all is well.i've been keeping my eye on you 4 the last few months.
take care Gort

Gort:
Hello and welcome!
OK, I have no idea who you are, but you've been a secret lemonade drinker for the past few months eh!
"Stand up and and make yourself known" :0)
Presumably a lady, so no offense about throwing, but it is true! :]
Take care too Gort?

Gort:
The day the world stood still, yeah? 50's scifi, it was the robot yeah?
I'm glad your liking the cow torch, he rules!
I'm still none the wiser as to who you are though.
Remember I'm from Kidderminster; you'll have to be less subtle :0)