A friend and I were out cycling in the Wyre Forest on Saturday morning and we noticed a few trees had been blown down in recent storms and had fallen across a stream like a makeshift bridge, so we went to go play on them :0)

We put our bikes down and my mate stopped by the fallen tree and said, "Did you hear that?"
I said, "Yeah, sounded like something squeaking!"

I then realise the sound is coming from my feet and upon closer inspection, I spot these two little dudes: 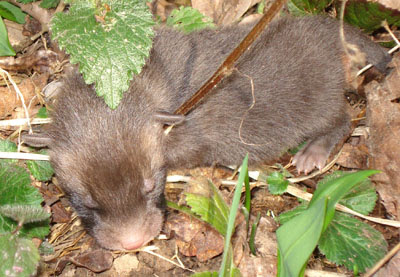 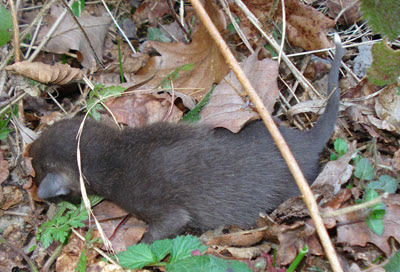 I suddenly turned into mush and was initially convinced they were abandoned puppy dogs, so I thought of rescuing them and then the thought of inadvertently acquiring two puppies did cross my mind - Not that I would complain of course!!!

Then, upon careful inspection with a stick (as not to leave a scent), I deduced they were actually otter pups, due to their clawed and slightly webbed feet, heavy whiskers and tail shape.

We left them alone, as the mother was probably out hunting or hiding round the corner away from us two herberts, but I do hope they were OK, as they only appeared a few days old.

This week I'm back off up to the Tan Hill Inn, as the owners are going to London for a few days and want me to work the pub in their absence.
See ya'll next weekend.


P.S. I just realised, I've been blogging for just over one year now! Happy Blogday to me :]

Today's Top Tip: Beat bicycle theft by towing a horse box behind your bike. When you stop, simply padlock the cycle securely inside!
Scrawled by Phil

Happy Blogday to you.

Have a marvellous week!

Code Monkey:
Indeed they are, were, either :]
Cheers!!!

Dakota:
Thanks Dakota and I'll try very hard to have a marvellous week :]

Those look more like fox cubs to me. The ears are wrong for otters, and then there's that white tip to the tail ...

Jan:
Yeah, now you mention it, the ears do look a little large and more dog-like than the rounded otter ears, mmm! Fox you say eh, could well be, I stand to be possibly corrected, but we'll never know I guess :]
Thanks for the blog day wishes!!!

So Doggboy cant tell a puppy from a notter? Tchoh!
Have a good time on the roof of the world
A

Hey I just checked the Tann Hill webcam. Was that you I saw sweeping up after closing? it's 22.27 now.

P.s. My 30gb iPod is filling up now too. Couldn't afford the 80 though. mine's from before the video was on it too.

Hey DoGGa!
Wow..can't believe it has been a year already! I was trying to think of how I managed to start reading your blog in the beginning...seems it may have been via American Phil's blog or JLee.
Anyway..Congrats and Happy Blogiversary :-) May have created a new word there...

Cute little pups whatever they are.

How would you padlock your bicycle inside of a horse?? haha
Did I misread your tip of the day?
Is it a horse and buggy?

What an amazing discovery. They definitely are cute by an off-the-scale factor. How far were you from the water?

Oh I want one!

What the hell do you have on your iPod that you ran out of room?? I suppose you single people have that kind of time )to listen to all that music) which fills me with envy.

happy blogday to u :-X

Rob:
Cute as can be.
Cycling can be hard... Well, the uphill bits anyhow :]
Ooh, that could of well been me on the webcam yeah!!!

Kayla:
No, the 1 year mark crept up so fast! Yeah, I'm not sure how we met in cyberblogdom either :]
Ah, it's a 'horse box' which is a trailer horse transorter thing towed behind vehicles. So yes, you did misread, but it made me laugh :0)
I'm starting to think Trojan now :]

Toccatta:
Yeah, cutealicious - They were about 2 foot from the small stream. Hope they're OK :[]

Sarah:
Me too, I'll post one over :]
Ah, my iPod - I have all my CDs (that I still listen too) and about 10 films and many Ghost in the Shell episodes etc.
Hehe, yeah, being single does have some advantages :]

Happy Bloggerversary. Very cool pictures of the baby critters. I looked at otter and fox pictures and it could be either, it's hard to tell.

Phil:
Cheers Phil!
Yeah, Otter or Fox seems to be the debate, but no one actually seems to know LOL. Oh well... I went back to the same place today, but saw nothing - No fox hole or Otter marks, or pooh or anything!